The Energy Subcommittee of the Senate Energy and Natural Resources Committee held a hearing on Sept. 12, titled “Fostering Innovation: Contributions of the Department of Energy’s National Laboratories.”

At the hearing, committee members and witnesses cheerfully discussed developments in several areas of energy R&D, including photovoltaics, energy storage, materials, and carbon capture. But their overarching concern was how DOE’s national laboratories foster collaborations between government, universities, and the private sector, speeding the development and commercialization of new technologies. As such, the hearing covered similar ground to one on energy R&D that the House Science Committee held in July.

An important subtext at both the earlier hearing and this week’s was the Trump administration’s policy of paring back the government’s applied research and technology development and commercialization activities to focus on “early stage” or “basic” research. That policy was manifest in the administration’s proposals to eliminate DOE’s Advanced Research Projects Agency–Energy and to cut funding for the department’s applied energy offices, including a 70 percent reduction for the Office of Energy Efficiency and Renewable Energy (EERE). 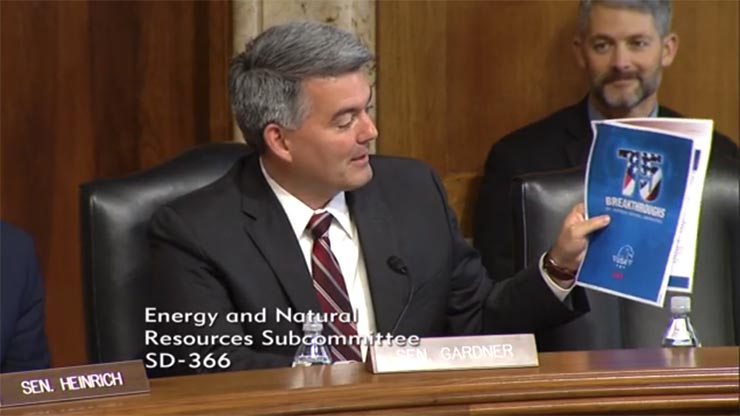 After the witnesses’ opening statements, Gardner, whose state is home to NREL, set the tone for the hearing by asking Ratnayake to relate her perspective on the value of the national labs. She replied that national lab facilities, and particularly NREL, aid Duke Energy by helping establish how new technologies will function within the electrical grid. She testified that, although the labs’ services are “not necessarily fundamental sciences,” neither technology manufacturers nor utilities have the incentives and resources to conduct such work. Yet without that work, she said, utilities will not risk implementing unproven technologies in their systems.

Gardner then asked her,

There are some who might say that our national labs, or the research labs in the federal government, are infringing or duplicating the work that’s done by the private sector. But that’s simply not true because of what you’ve just answered and explained, that you wouldn’t be doing what you do without that?

Ratnayake concurred, saying, “Anybody who says the national labs are infringing upon the potential of the private sector perhaps don’t understand the complexity of the system we are operating.”

All the witnesses emphasized the role of the national labs in building collaborations, particularly with private industry. Replying to a question from Sen. Martin Heinrich (D-NM) about what is working well in technology transfer, Kearns said, “One [thing] is thinking beyond transactional relationships with industry to really more strategic relationships with industry,” noting that Argonne had recently entered a cooperative agreement with Exelon to provide science, technology, and strategic planning support. He also pointed to the lab’s Chain Reaction Innovations program, which selects innovators to work with the lab to develop new technologies.

Anderson and Tumas likewise referred to the variety of collaborative efforts in which they and their institutions have been involved. Anderson emphasized the importance of regional collaborations, in his case through West Virginia University and DOE’s nearby National Energy Technology Laboratory. Tumas spoke more about nationwide and international collaborations, saying, “At NREL, we think we need to be as innovative in reaching out to partners as we are in our research.”

Although none of the hearing’s participants accepted the logic of the Trump administration’s R&D strategy, the only one to criticize it directly was Sen. Al Franken (D-MN), who remarked,

It seems like the administration is buying into kind of the Heritage Foundation fantasy that ignores the longstanding research model that’s been so effective in the United States. They’re now subscribing to really a dangerous approach — and I think a naïve one — that innovative technologies do not need assistance to transition from the lab and that there is no federal role through public–private partnerships and other types of support.

In addition to spotlighting the role the national labs play in energy technology innovation, the hearing also served as a vehicle for Heinrich to announce his introduction of the “Energy Technology Maturation Act.” The bill is co-sponsored by Gardner and Sens. Michael Bennet (D-CO), Dick Durbin (D-IL), Kamala Harris (D-CA) and Energy Subcommittee Ranking Member Joe Manchin (D-WV). Reps. Michelle Lujan Grisham (D-NM) and Ben Ray Luján (D-NM) have introduced a companion bill in the House.

Heinrich’s bill is similar to legislation that he introduced in 2014 and 2015 called the “National Laboratory Technology Maturation Act.” Those bills, which did not have a Republican co-sponsor, directed DOE to provide grants of up to $5 million each to the labs to develop technologies to the point where they could be licensed to companies. The new bill would provide authorization for a similar program that DOE initiated in 2015, which makes awards of up to $150,000 for projects aiming to attract private sector partners and of up to $750,000 for projects pursued with a partner. DOE just announced projects receiving funding from the program’s second round, totaling $19.7 million, on Sept. 13.

Last week, Reps. Eddie Bernice Johnson (D-TX), Ryan Costello (R-PA), Marcy Kaptur (D-OH), and Mia Love (R-UT) introduced a bill in the House to reauthorize ARPA–E, which has a budget of over $300 million and is a major DOE vehicle for promoting energy technology development and commercialization. That bill now has eight additional co-sponsors, including two more Republicans.

The Senate’s broad, bipartisan “Energy and Natural Resources Act” also contains provisions supporting DOE technology transfer and commercialization programs. Among its other innovation-related provisions, the bill would also increase ARPA–E’s funding authorization while directing it not to undertake projects that are duplicative of other federal efforts or that could be privately supported.

For further information on these and other science policy bills currently in Congress, see FYI’s Federal Science Bill Tracker.