President Trump’s official fiscal year 2018 budget request, which calls for deep funding cuts to most science agencies and many other non-defense programs, has received a chilly reception in Congress, setting the stage for a possible confrontation in the fall.

The White House released President Trump’s official fiscal year 2018 budget request yesterday, including detailed plans for the federal science agencies. In most cases, the administration is seeking deep cuts to the science agencies as part of a broader decrease in non-defense spending. This would offset a proportional increase in defense spending to fund the administration’s planned military and border security build up.

The budget, which the president submits to Congress annually, comes nearly three and a half months late, though presidents’ first budget submissions are often delayed. As expected, the request hews to the blueprint the administration released in late March.

The president’s proposed cuts to science range from minor — NASA’s Science Mission Directorate is targeted for a 0.9 percent reduction — to severe. For example, the Department of Energy’s $300-million Advanced Research Projects Agency–Energy would be eliminated. The below charts depict proposed changes for selected federal science agencies: 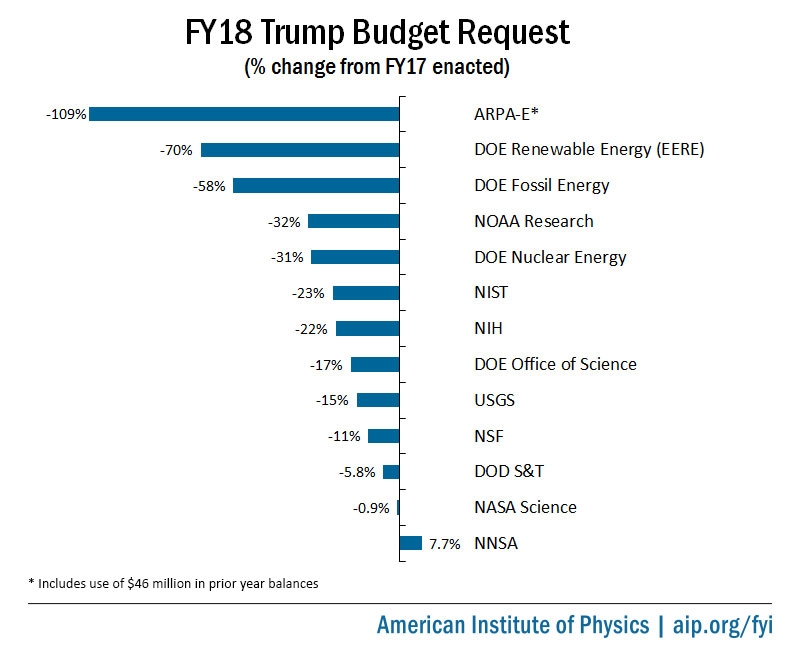 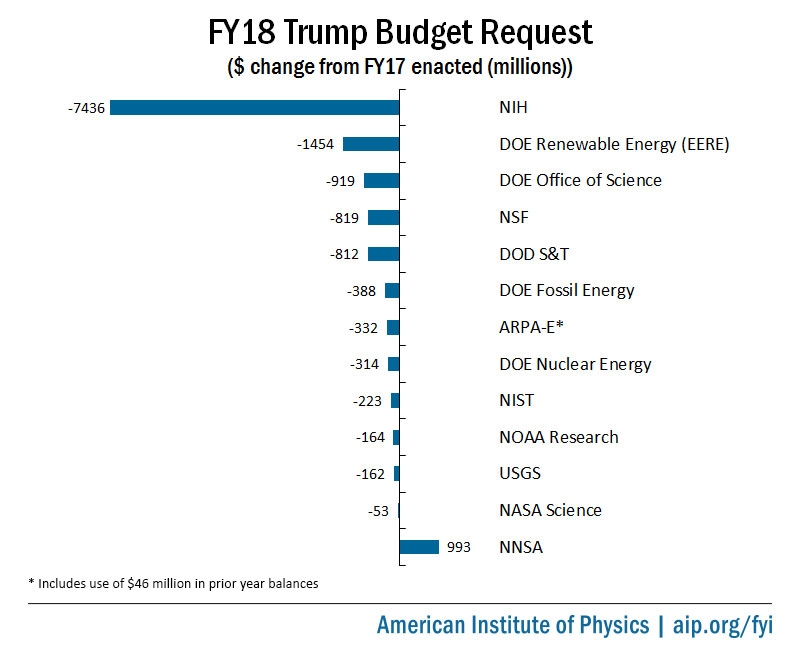 In addition, the administration is seeking to eliminate numerous science and STEM-related programs. Those targeted for elimination include, but are not limited to, the following:

While funding reductions at these scales would almost certainly lead to the elimination of multiple additional programs and painful layoffs within the federally funded scientific workforce, it is far from certain that they will be implemented. Final budgets will be allocated through appropriations legislation, and only a few weeks ago Congress showed a willingness to defy the White House when it largely ignored Trump’s last-minute fiscal year 2017 requests. How seriously Congress will treat the president’s priorities for fiscal year 2018 depends in part on how politics unfold in upcoming months.

Congress asserts its constitutional ‘power of the purse’ 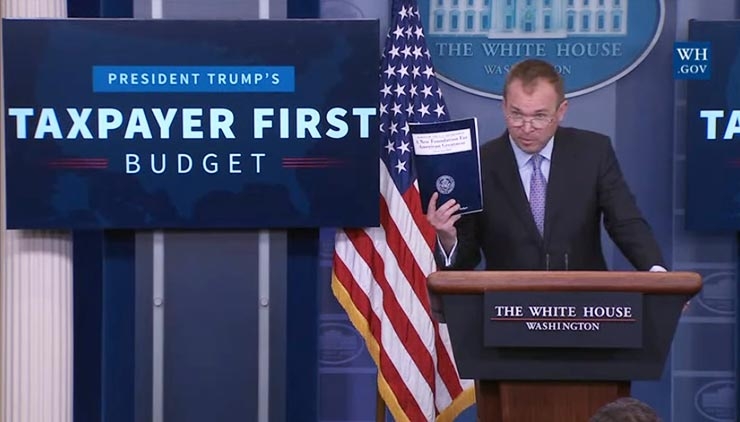 As the drastic spending cuts are spread across the government, much of the media’s and policymakers’ attention to the president’s budget has focused on its effects on health, education, and welfare. However, research is also a prevalent concern.

At the White House press conference marking the budget’s release, White House Office of Management and Budget Director Mick Mulvaney defended it as a “taxpayer first” document, arguing its cuts are focused on wasteful programs. When asked about cuts to climate science, he brought up the case of the climate change musical funded by NSF, saying,

What I think you saw happen during the previous administration is the pendulum went too far to one side, where we were spending too much of your money on climate change and not very efficiently. We don’t get rid of it here. Do we target it? Sure. Do a lot of the EPA reductions aim at reducing the focus on climate science? Yes. Does it mean that we are anti-science? Absolutely not. We’re simply trying to get things back in order to where we can look at the folks who pay the taxes and say, ‘Look, yeah, we want to do some climate science but we’re not going to do some of the crazy stuff the previous administration did.’

Republican appropriators are saying little about specific agencies or programs, asserting only that they will consult the request in formulating appropriations legislation. Senate Appropriations Committee Chair Thad Cochran (R-MS) said in a statement that the request is “an opportunity for Congress to reexamine programs across the government, and to address the significant fiscal challenges that face our country.”

It is our job to analyze the request, go through each and every budget line, question every witness, and demand spending justifications on behalf of the taxpayers who are footing the bill. Only then can Congress put forward our own plan to fund the federal government, ensuring the wise investment of taxpayer dollars on important programs while trimming back or eliminating waste and duplication.

The critical question now is how much sway the president’s budget will have over appropriators’ deliberations. Democrats, who are hostile to the request, still hold a filibuster in the Senate. And many Republicans are apt to resist the deep cuts the request proposes, including the cuts directed at science.

We should not pretend to balance the budget by cutting national laboratories, national parks, and the National Institutes of Health. 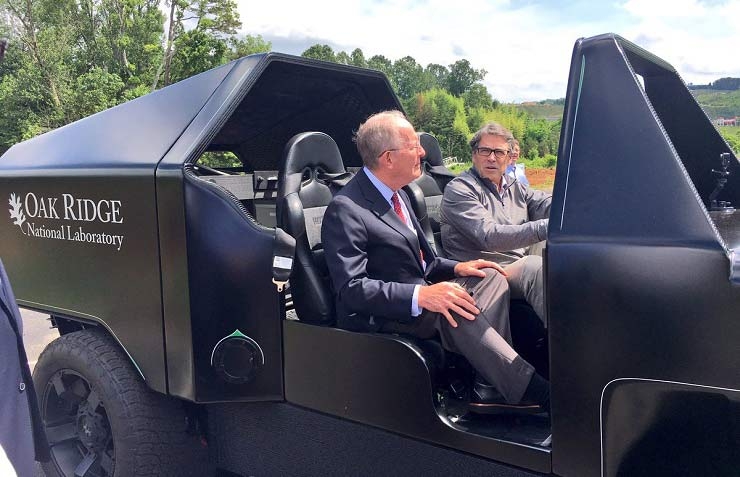 For their part, Trump and Mulvaney have indicated that, come September and the end of the fiscal year, the White House will be willing to risk a shutdown to see the president’s priorities through. Earlier this month, the president tweeted:

Our country needs a good ‘shutdown’ in September to fix mess!

There is little in the budget to suggest that President Trump will change the current trajectory that has been squeezing non-defense discretionary spending – the broad category that includes most science agencies – since Congress enacted its budget cap and sequestration law in 2011.

As federal R&D spending tends to rise and fall in proportion with total discretionary spending, these plans do not bode well for the administration’s future proposals for science.

Reacting to the budget, Laura Greene, chief scientist at the National High Magnetic Field Laboratory and president of the American Physical Society, an AIP Member Society, spoke to the impact on the broader scientific community:

Sustained, robust investments across all the federal science agencies are essential for the United States to compete in an increasingly global economy, strengthen its national security, improve education, and prepare a 21st century workforce. The president made his proposal, but it’s up to Congress to determine the budget. Congress has already shown that it recognizes the crucial role that science plays in U.S. competitiveness.