Funding for Department of Defense Science and Technology programs is increasing by 6 percent under fiscal year 2018 appropriations. DOD will also receive vastly expanded funding for prototyping and other programs designed to transition new capabilities into use.

With the finalization of fiscal year 2018 appropriations, funding for the Department of Defense’s Research, Development, Test, and Evaluation (RDT&E) accounts is set to increase by $16 billion, or 22 percent over the level enacted for fiscal year 2017, to a total of $88 billion.

Consonant with DOD’s and Congress’ interest in accelerating the transition of advanced technologies from R&D into acquisition, the largest percentage increases are in the large, late-stage accounts for technology prototyping, testing, and evaluation. These activities will now be funded at levels close to the high-water mark reached during the George W. Bush administration.

Funding for DOD’s earlier-stage Science and Technology accounts — Basic Research, Applied Research, and Advanced Technology Development — had been set to decrease under the spending bills originally advanced in the House and Senate. However, in the final appropriations agreement, S&T spending is rising 6 percent to almost $15 billion, a high level by recent historical standards.

The increase for S&T is spread unevenly among the three S&T accounts and the military service branches, as shown in the charts below, and a few service-level accounts do see modest decreases. Additional details are available in FYI’s Federal Science Budget Tracker. 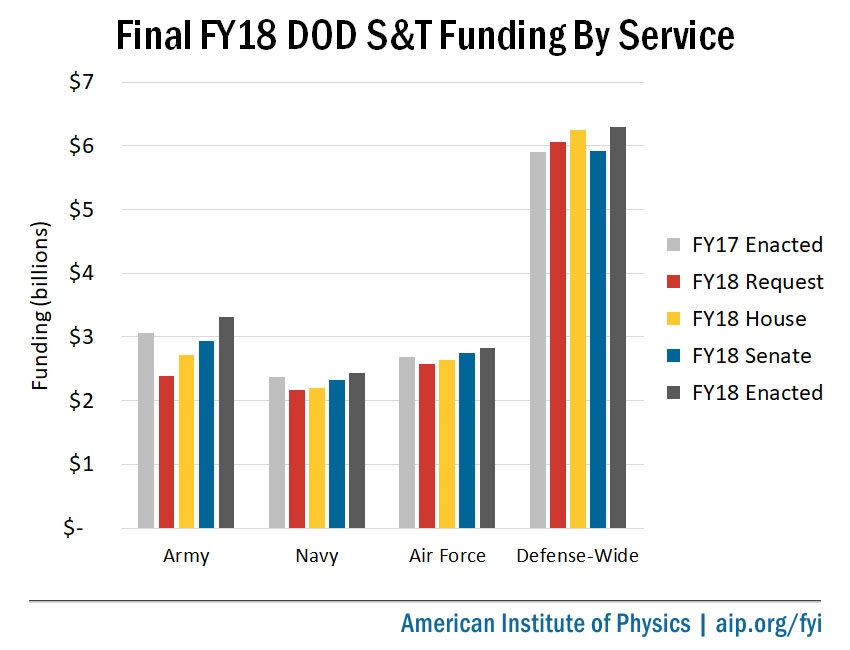 The text of the final appropriations law is available here, and a joint House-Senate explanatory statement containing detailed funding and policy direction is available here. The statement notes that language included in the report on the defense appropriations bill that the House passed last summer “warrants full compliance,” unless otherwise indicated by language in the statement. A great deal of additional policy guidance is provided to DOD annually through the National Defense Authorization Act, the most recent version of which was enacted in December.

Mix of increases and cuts for basic research activities

DARPA dominates increase for Defense Research Sciences. The lion’s share of DOD’s basic research is funded through the Defense Research Sciences line items. These programs, which support both research at DOD laboratories and extramural grants, will collectively rise 3 percent to about $1.5 billion. Defense-wide activities in this category, which are carried out by the Defense Advanced Research Projects Agency, are increasing 17 percent to $423 million, accounting for much of the increase. Funding for Army and Air Force activities will decrease by 7 percent and 10 percent, respectively.

National Defense Education Program ramps up with focus on manufacturing. Funding for the National Defense Education Program is increasing 30 percent to $103 million, with $29 million specified for manufacturing initiatives. The program aims to develop STEM talent through scholarships, fellowships, and support for STEM engagement opportunities at schools near DOD facilities.

Slight cut for University and Industrial Research Centers. Funding for the Army’s collaborative research alliances and centers is set for a marginal decrease to $107 million, or $20 million more than DOD requested. Congress specifies that $5 million of the additional funding be allocated to research on materials in extreme dynamic environments.

Army collaborative initiatives encouraged. The House report expresses support for the Army Research Laboratory (ARL) Open Campus Initiative and its extended campuses across the U.S., and it encourages ARL to create additional such collaborative opportunities. The report also specifies that the Army allocate $4 million “to support the hiring of university faculty under joint appointments with the laboratory at ARL extended campuses across the country to increase access to infrastructure, research staff, equipment, concepts, and results.” Under the Army Materials Technology Applied Research line item, the statement also specifies $8 million for an open campus pilot program.

Army facility modernization also encouraged. The House report also encourages the Army to prioritize the recapitalization and renovation of its research facilities, noting, “Modern buildings, equipment, and other resources are vital to ensuring that the Army stays at the cutting edge of technology and continues to recruit and retain the most talented scientific personnel.”

A number of initiatives aimed at transitioning new capabilities into use receive strong funding, consistent with DOD priorities.

Strategic Capabilities Office clears $1 billion mark. The Strategic Capabilities Office (SCO), which develops novel applications for existing and near-future technologies, is receiving $1.2 billion in funding, a 33 percent increase. Although slightly short of the requested amount, the increase continues the office’s rapid expansion from its origins as an experimental effort. Notably, SCO’s founding director, Will Roper, recently became the Air Force’s assistant secretary for acquisition and the office is being folded into DOD’s new research and engineering organization. The statement directs DOD to report to Congress on its plan to preserve SCO’s efficacy going forward.

Within these increases, Congress has specified over $140 million for work on laser technologies, though $36 million of it represents a transfer from another program rather than new spending. The most recent NDAA stipulated that DOD establish a new program to award contracts for prototyping and demonstrating directed energy weapon systems, and authorized $100 million for the activity.

Other innovation and prototyping initiatives preserved. Congress is maintaining $250 million in funding for the Defense Rapid Innovation Fund though DOD requested no funds for it. Congress is providing about $25 million each to two high-profile efforts to promote collaboration between DOD and innovators, the Defense Innovation Unit Experimental (DIUx) and the National Security Technology Accelerator, also known as MD5.*