Congress has passed the National Defense Authorization Act, an annual bill that sets policy for the Department of Defense and the National Nuclear Security Administration. The final version incorporated or adapted many of the R&D-related proposals from the original House and Senate versions of the bill. 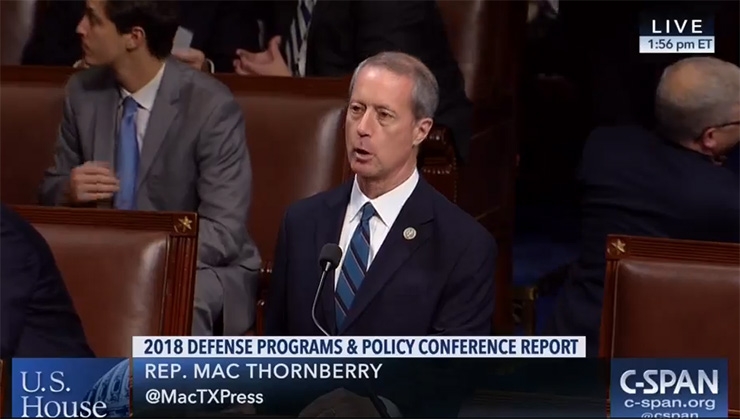 On Nov. 14, the House passed the National Defense Authorization Act (NDAA) on a vote of 356 to 70. Two days later, the Senate passed it by a voice vote, and the legislation now awaits President Trump’s signature.

The NDAA is an annual bill that updates policy for the Department of Defense and the National Nuclear Security Administration. The final version is forged in conference committee from two separate bills assembled by the House and Senate Armed Services Committees. Considered vital to national security needs, Congress has passed a new version every year for the past 56 years.

While the bill addresses military policy broadly, it contains numerous provisions and line-item funding authorizations relating to R&D and defense technologies. A conference report accompanying the bill offers additional guidance on Congress’ intentions and its reasoning for including or leaving out provisions from the original House and Senate bills.

Policy review. A number of the NDAA’s R&D-related provisions create or modify DOD labs’ authorities and alter department policies to improve the labs’ effectiveness. Each year, Congress develops such provisions in communication with leaders in the department and the military services. This year’s NDAA formalizes the process of obtaining DOD feedback by specifically requiring the department to assemble a report on “directives, rules, regulations, and other policies that adversely affect the ability of the innovation, research, and engineering enterprise of the Department of Defense to effectively and efficiently execute its missions.” The exercise will be conducted through the soon-to-be-created position of under secretary of defense for research and engineering (USD(R&E)). Conference report language further specifies that Congress will expect such a report annually.

Collaboration and innovation at DOD labs. The NDAA includes provisions from the original Senate bill aiming to incentivize innovation and to augment DOD’s collaborations with research groups outside the department. Specifically, these stipulate that:

Science and technology reinvention labs. The Naval Medical Research Center, the Joint Warfighting Analysis Center, and the Naval Facilities Engineering and Expeditionary Warfare Center will join the list of DOD “science and technology reinvention laboratories,” allowing them to make use of certain special authorities granted to the labs. A proposal to include individual technical directorates of the Air Force Research Laboratory was not adopted, with the conference report clarifying that laboratory executives are expected to delegate their authorities to lower-level lab directors as needed.

Provisions not included. A House provision establishing a technology transfer program among DOD labs, Department of Energy national labs, and private entities was not included in the final bill. The conference report notes the provision arose from questions about the transfer of technology developed at national labs with DOD funding. Congress is instead requesting a briefing on the matter.

The final bill does not include a Senate provision defining “research and development,” which was intended to distinguish R&D contracts from contracts for other kinds of services.

The bill also did not include a Senate provision that would have extended to the Defense Innovation Unit Experimental and the Strategic Capabilities Office special authorities already granted to DOD labs to help recruit experts in science and engineering. 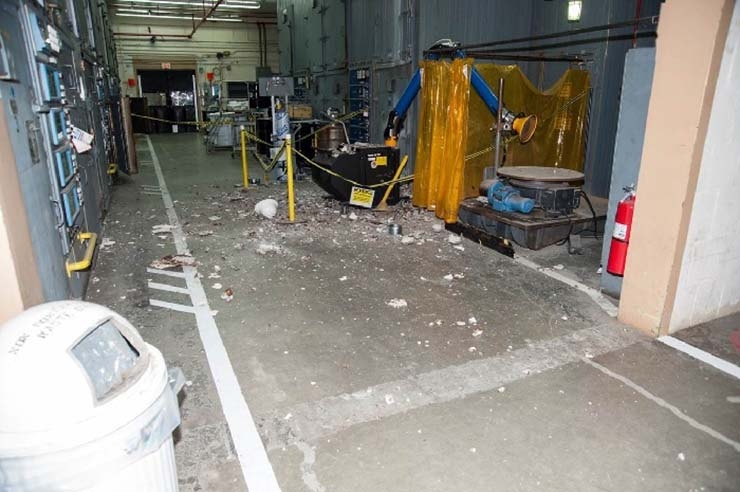 At a hearing last year, Rep. Mike Rogers (R-AL) displayed this photo of damage from a ceiling collapse at the Y-12 National Security Complex in Oak Ridge, Tennessee, alongside other photos of crumbling infrastructure at nuclear security facilities, illustrating the dire maintenance situation that the National Nuclear Security Administration faces.

Infrastructure Modernization Initiative. To address a backlog in deferred maintenance and repair projects at its labs and other nuclear facilities — estimated in 2015 to total $3.7 billion — the National Nuclear Security Administration will establish an “Infrastructure Modernization Initiative.” Under it, the agency will have special authorities to carry out projects needed to reduce the backlog “by not less than 30 percent by 2025.”

The initiative is less ambitious than the House-proposed goal of reducing the backlog by 50 percent within five years. However, unlike the House’s proposal, the initiative will not have a fixed endpoint, with an extension possible pending the results of a program assessment to be completed by 2024. The NDAA also authorizes $150 million in immediate funding for maintenance projects and instructs NNSA to complete a plan for the initiative, including its funding requirements, by March 2018. The funding authorization does not guarantee that congressional appropriators will make the funds available.

National security lab contract assessment. The NDAA also instructs NNSA to commission an assessment of the management and operating contracts of national security labs, encompassing NNSA’s contractor selection process, the relative benefits of for-profit and nonprofit models, and the effectiveness of NNSA’s contract oversight. NNSA is currently anticipating awarding a new contract for Los Alamos National Laboratory. The performance of the current contractor has come under critical scrutiny. Sandia National Laboratories, meanwhile, is operating under a newly modified contract model.

Minority-serving institutions. The NDAA authorizes $40 million in support for historically black colleges and universities and other minority-serving educational institutions. This is more than $14 million above the Trump administration request. The conference report notes that “these institutions are vital in developing the next generation of scientists and engineers who will help lead the Department of Defense in addressing high-priority national security challenges.”

Workforce needs. The bill does not adopt a House provision directing DOD to conduct a formal assessment of its workforce needs in “science, technology, engineering, math, maintenance, and manufacturing (STEM(MM)).” However, the conference report notes that, with much of its technically skilled workforce reaching retirement age, the department “should be taking decisive, proactive action to ensure there is sufficient personnel for these areas, and that any further skills and knowledge gap does not lead to a serious readiness gap.”

EPSCoR. In a provision reauthorizing DOD’s Experimental Program to Stimulate Competitive Research (EPSCoR), the bill changes the program’s title to use the word “Established” rather than “Experimental,” reflecting its permanent status. Among other modifications it makes to the program, the bill adds a new program objective: “To increase the number of university researchers in eligible States capable of performing science and engineering research responsive to the needs of the Department of Defense.” It also adds a new program activity: “To provide assistance to science and engineering researchers at institutions of higher education in eligible States through collaboration between Department of Defense laboratories and such researchers.”

Climate impacts report. The NDAA directs DOD to assemble within one year “a report on the vulnerabilities to military installations and combatant commander requirements resulting from climate change over the next 20 years.” The report is to list the 10 military installations within each service that are most vulnerable to climate change effects, as well as to review mitigation steps and other “climate-change related effects” on DOD. These effects include “the increase in the frequency of humanitarian assistance and disaster relief missions” and impacts on “theater campaign plans, contingency plans, and global posture of the combatant commanders.”

Space Corps jettisoned. The final bill did not adopt the House’s proposal to create an independent Space Corps service branch. In its place is a provision directing DOD and the Department of the Air Force to undertake a substantial reorganization of their bureaucracy for space activities, including eliminating the principal DOD space advisor position (filled by the Secretary of the Air Force), the Defense Space Council, and the Air Force Space Operations Directorate.

Space-based weather observations. Last year’s NDAA directed DOD to prepare a plan for transferring space-based environmental monitoring missions from the Air Force to the National Reconnaissance Office. However, this year’s bill does not include a House provision directing DOD to proceed with a transfer of certain weather observation missions.

Directed energy weapons. Building off a provision in last year’s NDAA requiring DOD to designate a senior official with principal responsibility for directed energy weapons, this year’s bill assigns that role to the new USD(R&E). Further, the USD(R&E) is to establish a new program to award contracts for prototyping and demonstrating directed energy weapon systems. The bill authorizes $100 million for the program, which is half of what the Senate had proposed in its bill. Of note, President Trump’s nominee for USD(R&E), Mike Griffin, recently retired as CEO of Schafer Corporation, a technology services firm with a major portfolio in directed energy technology.

Electromagnetic Pulse Commission. The NDAA establishes a Commission to Assess the Threat to the United States from Electromagnetic Pulse Attacks and Similar Events, which will study “the nature, magnitude, and likelihood of potential [EMP] attacks and similar events, including geomagnetic disturbances, both manmade and natural, that could be directed at or affect the United States within the next 20 years.” It will also assess U.S. vulnerability to such events and its ability to recover from them and to harden its assets against them. The 12-member body, comprising “private United States citizens with knowledge and expertise in the scientific, technical, and defense aspects” of the issue, is to report back to Congress by April 2019.

Congressionally Directed Medical Research Program. This year, the Senate bill included a provision that would have placed major restrictions on the Congressionally Directed Medical Research Program (CDMRP), a controversial mechanism for funding medical research through the DOD budget. The final bill does not include those restrictions. However, the conference report expresses strong concerns about the pressure that CDMRP places on the rest of DOD’s budget so long as that budget remains capped by the Budget Control Act of 2011. It also observes, “Since 1992, Congress has appropriated over $11.7 billion for medical research administered by the CDMRP — 4,000 percent growth since 1992 — but not all of that medical research is directly relevant to military service. … While the conferees agree that DOD has a proper and vital role to play in medical research related to combat readiness … additional funding for medical research unrelated to unique military needs should be allocated elsewhere in the federal government. Therefore, the conferees encourage funding only those medical research and development projects that protect and enhance military readiness or restore the health and safety of members of the Armed Forces.”