The final appropriations agreement for fiscal year 2018 brings funding increases, in some cases large ones, to almost all of the Department of Energy’s applied R&D programs.

In its budget proposals for both fiscal years 2018 and 2019, the Trump administration proposed dramatic cuts to DOE’s applied energy offices and the elimination of the Advanced Research Projects Agency–Energy. The administration argues that many programs supported by these offices, including a large fraction of their R&D portfolios, are more appropriately supported by private entities.

A number of lawmakers from both parties criticized the cuts, while appropriators initially proposed less extensive cuts in most cases. Earlier this year, though, the bipartisan budget agreement to raise spending caps unlocked additional funds, leading Congress to provide the increases summarized in the chart below. 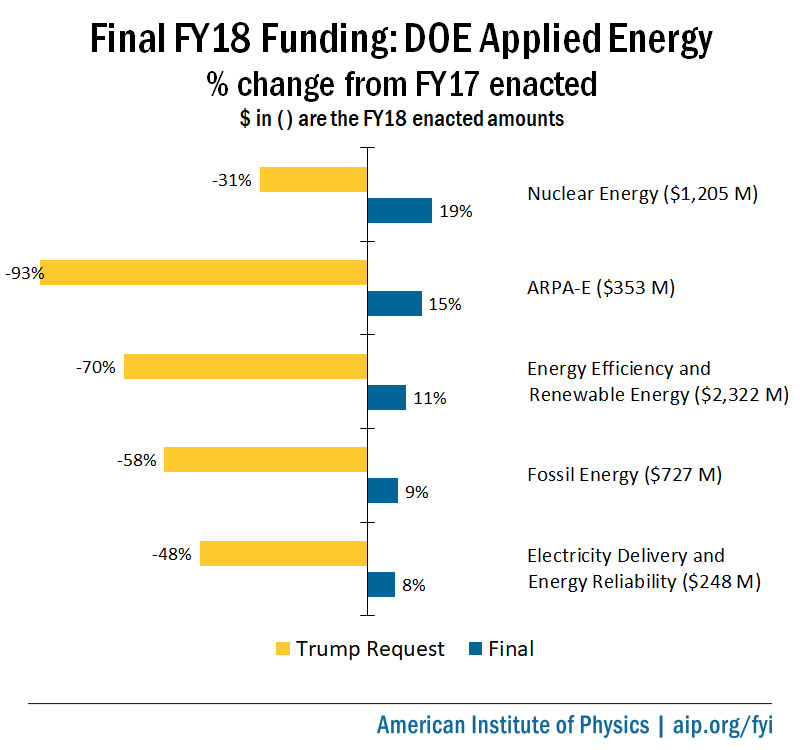 The text of the final appropriations law is available here, and a joint House-Senate explanatory statement containing detailed funding and policy direction is available here. The statement notes that language and funding allocations included in House and Senate Appropriations Committee reports carries the same weight as language in the statement, unless specifically negated. Tables with funding amounts by account are available in FYI’s Federal Science Budget Tracker.

For the past year, the administration’s proposal to terminate the Advanced Research Projects Agency–Energy has been a subject of ongoing discussion in Congress, drawing opposition from influential lawmakers in both parties. In their original spending bill, House appropriators acceded to the move while Senate appropriators vehemently rejected it. With no further comment, the final appropriations agreement funds ARPA–E at $353 million, a 15 percent increase over fiscal year 2017 and the agency’s highest annualized budget since it first received funding in 2009.

Although the administration and House proposed deep cuts to the Office of Energy Efficiency and Renewable Energy (EERE) and the Senate a more modest decrease, the final appropriations agreement increases its budget 11 percent to $2.3 billion. 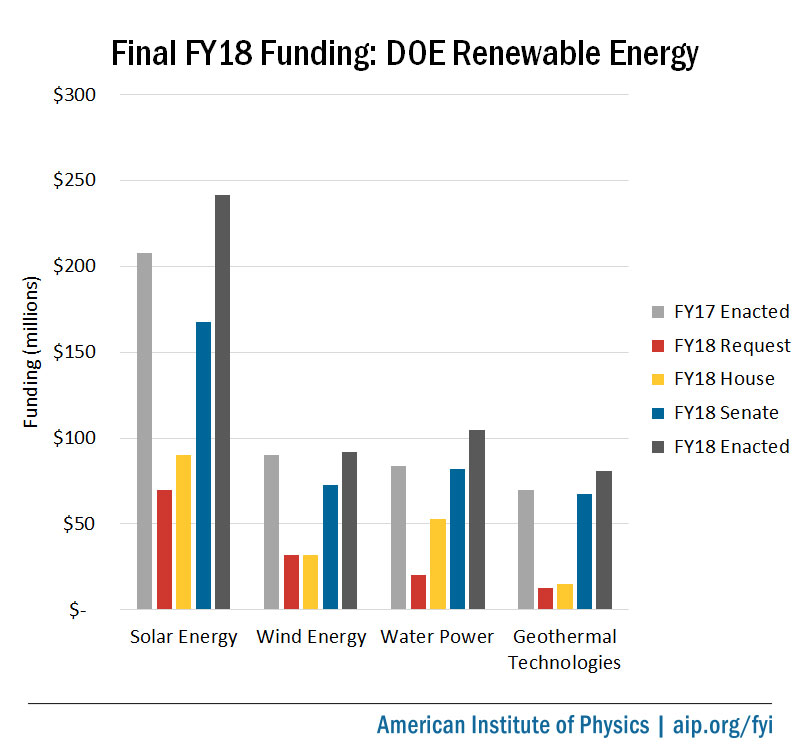 Solar energy research funding restored. Both the House and Senate originally proposed a second straight year of major cuts to solar energy R&D, but funding for the program is instead increasing by 16 percent to $242 million, restoring it to its fiscal year 2016 level.

Within that amount, funding for photovoltaics R&D is increasing 9 percent to $70 million with language encouraging DOE to continue supporting its Photovoltaic Regional Test Centers. Funding for concentrating solar power remains steady at $55 million, with $6 million specified for competitively selected projects in advanced thermal desalination. The budget for innovations in manufacturing competitiveness, which has fallen from its peak of $84 million in fiscal year 2012, is increasing 20 percent to $20 million.

Wind energy picks up slightly. Funding for wind energy R&D is increasing 2 percent to $92 million, with no less than $15 million allocated to “early stage research on materials and manufacturing methods and advanced components.” The budget for the National Wind Technology Center will remain flat at $30 million.

Rising tide for water power. The budget for water energy R&D is increasing 25 percent to $105 million, which includes $70 million for marine and hydrokinetic technology research, development, and deployment. The statement also specifies $30 million for “industry- and university-led basic and applied research, development, and validation projects encompassing a pipeline of higher and lower technology readiness levels.”

New solicitation funded for next-generation reactor projects. About half of the newly available R&D funding goes to an 80 percent increase in the budget for reactor concepts R&D, bringing it to $237 million. Within that, the budget for advanced reactor technologies is increasing from $92 million to $155 million with no less than $60 million to be allocated to “a solicitation to support technical, first-of-its-kind engineering and design and regulatory development of next generation light water and non-light water reactor technologies, including small modular reactors.”

Proposed fast neutron reactor proceeding to the starting line. Another project within the reactor concepts program, the proposed versatile fast test reactor, is receiving $35 million. The funding matches the authorization amount for fiscal year 2018 specified in the “Nuclear Energy Research Infrastructure Act” pending in Congress. That legislation calls for a ramp up to $100 million in fiscal year 2019 with cumulative funding of nearly $2 billion through fiscal year 2025.

Funding growing for nuclear enabling technologies. The budget for nuclear energy enabling technologies is increasing 38 percent to $159 million. Within that, crosscutting technology development is nearly doubling to $50 million, with $30 million allocated to “support development of advanced reactor technologies and high-priority crosscutting research and development areas,” while $10 million is for advanced sensors and instrumentation and $6 million is for hybrid energy systems. Funding for the Nuclear Energy Advanced Modeling and Simulation Program is held flat at $28 million, while the budget for the Nuclear Modeling and Simulation Energy Innovation Hub, which the administration proposed to shut down, is increasing 23 percent to $30 million. Funding for nuclear science user facilities is increasing from $31 million to $41 million, with $5 million specified for nuclear energy computation support.

No funding for Yucca Mountain. Although the Trump administration proposed spending $120 million in fiscal year 2018 to restart work on the Yucca Mountain nuclear waste repository in Nevada along with an interim storage facility, opposition in Congress remained powerful enough to deny the project funding.

Few changes in store for carbon capture and storage. Funding for fossil energy R&D is increasing 9 percent to $727 million. There is a marginal decrease in the $101 million budget for carbon capture R&D, while the level for carbon storage R&D is increasing 3 percent to $98 million, with $12 million specified for carbon use and reuse and $45 million for storage infrastructure. The statement also specifies $35 million for continued support of two large-scale pilots focusing on “transformational coal technologies that represent a new way to convert energy to enable a step change in performance, efficiency, and the cost of electricity compared to today’s technologies.”

Increase for Advanced Energy Systems. Funding for the Advanced Energy Systems program is increasing 7 percent to $112 million, with $30 million specified for R&D on solid oxide fuel cells “to enable efficient, cost-effective electricity generation with minimal use of water and the use of abundant domestic coal and natural gas resources with near-zero atmospheric emissions of CO2 and pollutants.”

Fossil energy strategy required. Broadly, the statement directs DOE “to develop a cohesive policy and technology strategy and supporting roadmap or long-term plan for its Fossil Energy Research and development portfolio and supporting infrastructure” as well as “to conduct a comprehensive assessment of Fossil Energy writ large to include Fossil Energy Headquarters programs, [the National Energy Technology Laboratory], and relevant competencies of other national laboratories which support the mission of the Office of Fossil Energy.”

Energy storage R&D part of increase for delivery and reliability