The text of the final law is available here, and a joint House-Senate explanatory statement (henceforth, “the statement”) containing detailed funding and policy direction is available here. Unless specifically noted in the statement, language from the House and Senate Appropriations Committees’ earlier reports also conveys congressional direction. A table with funding amounts for NASA’s directorates and certain programs is available in FYI’s Federal Science Budget Tracker. 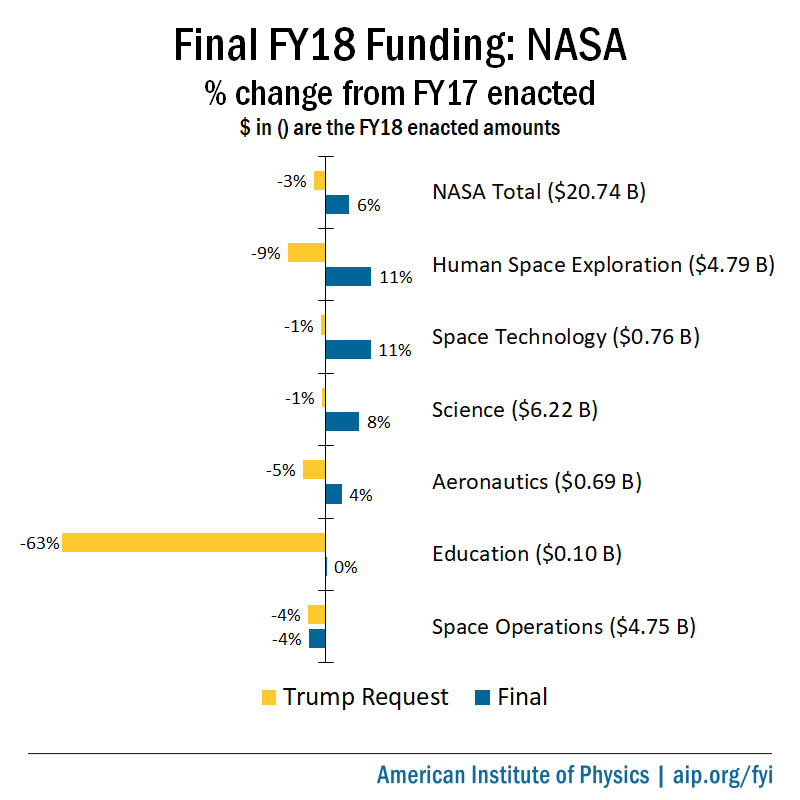 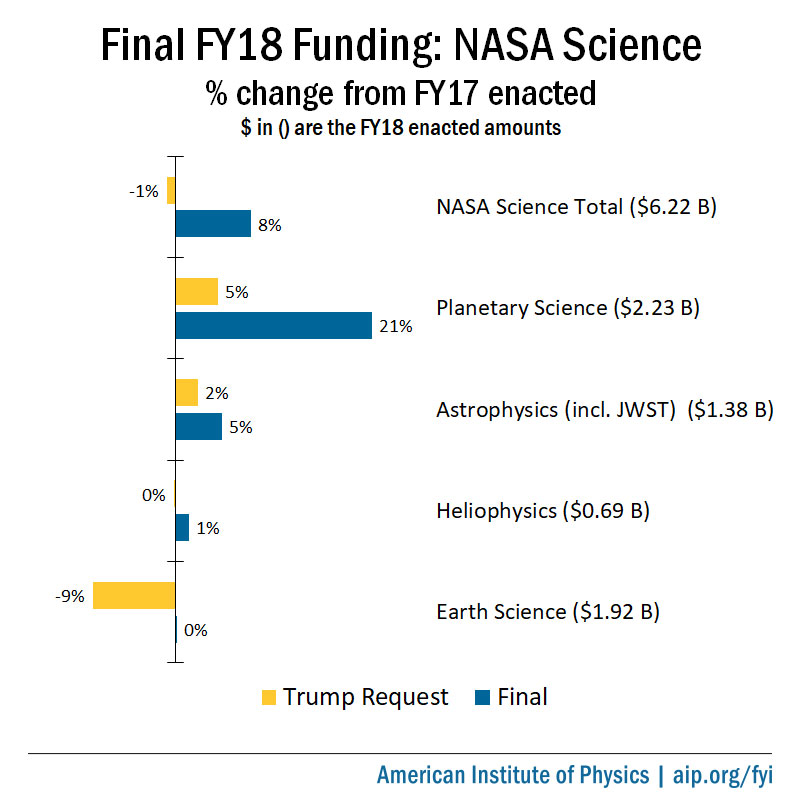 The Planetary Science budget is set to increase to $2.2 billion.

Europa Clipper and Lander ramp up quickly. Much of the division’s new funding will go to ramping up its missions to Jupiter’s moon Europa, from $275 million in fiscal year 2017 to $595 million. As it did last year, the bill directs that NASA pursue the Europa Clipper mission, which will conduct multiple flybys of the moon, as well as a separate mission to land on it. The law also stipulates that NASA launch both missions using Space Launch System (SLS) rockets and plan for launch deadlines of 2022 and 2024 for the Clipper and Lander, respectively. The Europa mission is a priority of House Appropriations subcommittee chair John Culberson (R-TX), who hopes life can be found in the moon’s subsurface oceans.

The Trump administration has been pressing to pursue only the Clipper mission. In its fiscal year 2019 budget request, it suggests SLS is not a cost-effective means of launching the Clipper and that using the vehicle earlier than 2024 would disrupt NASA’s human exploration plans. It proposes launching in 2025 instead. 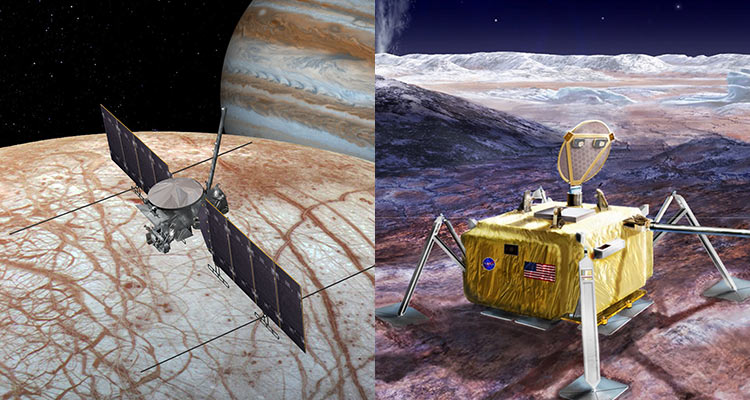 Extra components for Mars missions funded. The statement specifies $660 million for Mars missions and expresses support for the proposed Mars Sample Return mission, including an orbiter component targeted for launch in 2022. NASA has apparently been considering forgoing the new orbiter in favor of a simpler sample return mission architecture. The statement also specifies that the development of a helicopter that could accompany the Mars 2020 rover mission should receive $23 million, an increase of $8 million over last year.

Combined funding for the Astrophysics Division and the James Webb Space Telescope (JWST) is set to rise 5 percent to nearly $1.4 billion. The budget for the division excluding JWST is rising 13 percent as funds freed up from the mission’s pre-launch ramp down are fed back into other astrophysics missions.

JWST funded but likely to breach cost cap. Appropriations for JWST meet the administration’s request for $534 million, while statutory language reaffirms the $8 billion budget cap on the flagship mission’s formulation and development. On March 27, after the appropriations were enacted, NASA announced the mission’s launch will be delayed to 2020, meaning it will likely breach the cap. If it does, NASA must receive permission from Congress to keep the project going.

Speaking at the National Academies Space Science Week on March 28, Astrophysics Director Paul Hertz said he anticipates that JWST would not require any increase in funds until 2020 and that, in the longer term, any impacts on the rest of the Astrophysics portfolio will be modest.

WFIRST supported budgetarily and politically. Appropriations for the Wide Field Infrared Survey Telescope (WFIRST), another flagship, are $150 million, exceeding the administration’s request by $23 million. The administration has proposed canceling the mission in fiscal year 2019, but work toward its expected launch in the mid-2020s will continue to ramp up for at least the time being. While the statement does not address the administration’s proposal directly, it does stress “the importance of the decadal survey process and rejects the cancellation of scientific priorities recommended by the National Academy of Sciences decadal survey process.” It also notes that WFIRST was “the highest priority of the 2010 Astrophysics Decadal Survey.”

SOFIA exempted from senior review. Appropriations for the airborne Stratospheric Observatory for Infrared Astronomy (SOFIA) mission are $85 million, exceeding the administration’s request by about $5 million. Hertz said at Space Science Week that the mission would not be able to use the extra funds because it is already operating optimally. The statement also effectively exempts SOFIA from the senior review process governing NASA’s mission continuation decisions for its first 20 years of operations. SOFIA had been scheduled to undergo its first senior review in fiscal year 2019. Hertz said NASA will have to find an alternative review mechanism as no mission should evade review for two decades.

The Earth Science Division budget is set to remain flat at $1.9 billion.

Four missions protected. In its budget requests for both fiscal years 2018 and 2019, the administration proposed to zero out the division’s Plankton, Aerosol, Cloud, and ocean Ecosystem (PACE) mission, the Climate Absolute Radiance and Refractivity (CLARREO) Pathfinder mission, the Earth-facing camera aboard the Deep Space Climate Observatory (DSCOVR), and the Orbiting Carbon Observatory-3 (OCO-3). The statement specifies the missions should be funded.

Cancelled Radiation Budget Instrument shown appreciation. The administration also proposed cancelling RBI, which was intended for integration aboard the National Oceanic and Atmospheric Administration’s JPSS-2 weather satellite, expected to launch in 2021. Following an internal review, NASA decided to cancel the mission on its own authority in January. Nevertheless, the statement expresses support for RBI’s goals, stipulating, “NASA is directed to preserve the significant investment made to date when closing out the program and to retain appropriate options to utilize the instrument in the future. Further, NASA shall report to Congress … on plans to ensure the collection of energy budget data beyond the JPSS-1 Clouds and the Earth’s Radiant Energy System (CERES) instrument.”

Landsat-9 on track. Appropriations meet the administration’s request of $176 million for work on the Landsat-9 satellite, a major U.S. Geological Survey asset scheduled to launch in 2020.

Heliophysics on a steady course

The budget for the Heliophysics Division is set to increase 1 percent to $689 million.

Decadal survey recommendations endorsed. Senate report language directs the division to implement recommendations from the 2013 solar and space physics decadal survey that NASA alternate funding between small and mid-sized Explorer missions every two years and enable the selection of missions of opportunity. It also supports a recommendation to increase competitive research funding to advance technology development and establish a set of Heliophysics Science Centers.

Space weather research. Senate report language also specifies that NASA dedicate $10 million to a space weather research program. It further directs, “NASA should coordinate with NOAA and the Department of Defense to ensure that NASA is focused on research and technology that enables other agencies to dramatically improve their operational space weather assets and the forecasts they generate using data from those assets including current and future ground-based telescopes and instruments that are expected to come on line, such as [the National Science Foundation’s] Daniel K. Inouye Solar Telescope.”

The House and the Senate reports both specify that the SMD budget for education and outreach should rise from $37 million to $44 million. The House directed that these funds be derived proportionately from each division’s budget, appearing as a line item in each, while the Senate directed that NASA establish a single line item for SMD-wide education funding. The statement does not definitively resolve how NASA should derive these funds.

NASA's Office of Education, which the Trump administration proposed to eliminate, will maintain level funding at $100 million.