In the second half of his first year in office, President Trump increased his pace in making nominations to science-related positions in the federal government. However, many Senate-confirmed positions still lack nominees and some nominees have faced difficulties with Senate confirmation, resulting in an unprecedented number of long-term vacancies. 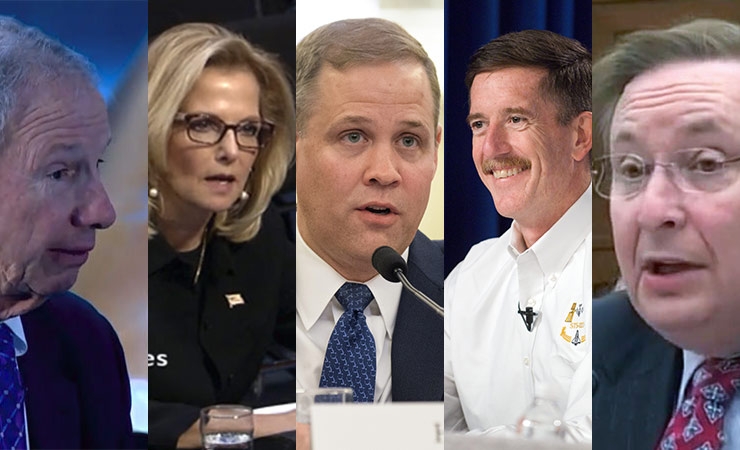 With the first year of Donald Trump’s presidency now passed, many science-related leadership positions in the federal government remain unfilled. These posts have occasionally remained vacant for extended periods before. It is, though, unprecedented in recent history for so many to be vacant for so long at the same time. In a number of cases, Trump has still not announced nominees, while in others he has made selections but the Senate has not moved quickly to confirm them.

In the absence of duly appointed leaders, affected agencies and offices have been administered by acting officials, some of them civil servants and some political appointees. These officials are limited in their ability to develop new initiatives or to influence or speak for the administration on matters of policy. Moreover, under the Vacancies Act of 1998, in cases where there has been no nominee, these officials lost their “acting” status on Nov. 16, 2017, requiring decisions that the law assigns to holders of the position to be made by agency heads instead. 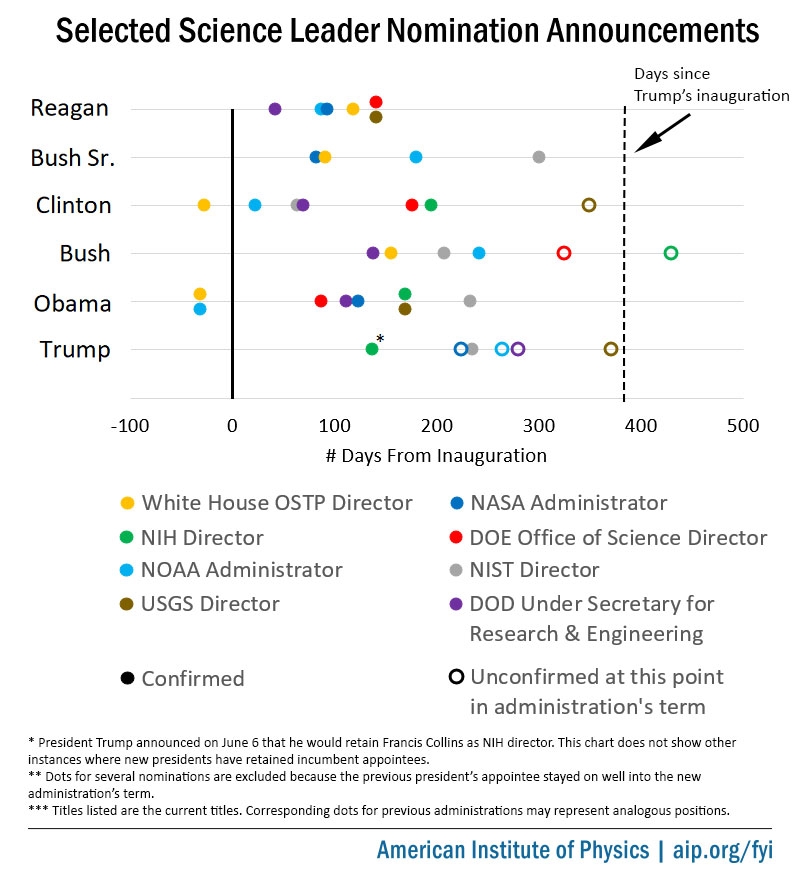 Trump’s record to date of making nominations is mixed

Last year, Trump got off to a slow start in making nominations, including to science-related positions, and even now a significant number of Senate-confirmed positions have no nominees.

Most notably, there are no nominees for the director and up to four assistant directors of the White House Office of Science and Technology Policy, though the White House has considered candidates over the past year. Trump renewed the charter of the President’s Council of Advisors on Science and Technology last fall but has not announced members, who would not require Senate approval.

At federal agencies, a variety of science-related leadership positions also remain without nominees, including:

However, Trump has successfully placed nominees in other positions. Deputy Energy Secretary Dan Brouillette, National Oceanic and Atmospheric Administration Deputy Administrator Tim Gallaudet, National Institute of Standards and Technology Director Walter Copan, and Assistant Secretary of the Interior for Water and Science Tim Petty each only took about one month to clear the Senate.

DOE Under Secretary for Science Paul Dabbar and Under Secretary of Energy Mark Menezes each took about four months to be confirmed. Trump’s pick for under secretary of defense for research and engineering, Mike Griffin, has now taken over three months, but the Defense Department only formally established the position on Feb. 1. (Update: The Senate confirmed Griffin by voice vote on Feb. 15.)

Trump chose to retain the Obama administration’s director of the National Institutes of Health, Francis Collins, and, following tradition, he retained France Córdova as NSF director, who is in the middle of a six-year term. Trump also retained Frank Klotz as NNSA administrator, but Klotz stepped down on the one-year anniversary of Trump’s inauguration. Trump named his nominee to succeed Klotz, Lisa Gordon-Hagerty, a former DOE and National Security Council official, in December and her confirmation hearing was yesterday. (Update: The Senate confirmed Gordon-Hagerty by voice vote on Feb. 15.)

Some nominations mired in the Senate

A few nominations appear to have stalled in the Senate.

According to the Wall Street Journal, the nomination of Rep. Jim Bridenstine (R-OK) to be NASA administrator is facing not only unanimous rejection from Democrats but also staunch opposition from Sens. Marco Rubio (R-FL) and John McCain (R-AZ). If so, Bridenstine lacks the votes for confirmation, but there is no sign yet that Trump intends to select an alternative for the high-profile job.

Trump nominated Barry Myers to be NOAA administrator in October. The Senate Commerce, Science, and Transportation Committee advanced his nomination on a party-line vote in December, with Democrats objecting that his ties to AccuWeather — a weather forecasting company he co-founded that relies heavily on NOAA services and products — are an unacceptable conflict of interest. Although no Republicans have publicly opposed Myers’ nomination, his wait for a floor vote has become unusually long.

The nomination of Neil Jacobs, chief atmospheric scientist at Panasonic Avionics, to be assistant secretary of commerce for environmental observation and prediction, a high-level NOAA position, has proceeded alongside Myers’. Although Jacobs has faced only minimal opposition, he, too, has not yet received consideration by the full Senate, though sources say he may soon. (Update: The Senate confirmed Jacobs by voice vote on Feb. 15.)

The nomination of Diana Furchtgott-Roth to be assistant secretary of transportation for research and technology has been awaiting floor action for three months.

It is not uncommon, particularly in recent years, for partisan conflict to throw up procedural hurdles or for individual senators from either party to place holds on nominations. Such maneuvers have considerably delayed and sometimes derailed even uncontroversial nominations.

Notably, during the Obama administration, the nominee for deputy NSF director, Richard Buckius, failed to receive a floor vote, as did Robert Simon, nominated to be assistant OSTP director. After the resignation of Under Secretary of Energy Kristina Johnson in 2010, three different nominees to succeed her never received a floor vote, leaving the position vacant for seven years. President Obama took two years to nominate Lynn Orr to succeed DOE Under Secretary for Science Steve Koonin and the Senate took a further year to confirm him. There was no director of the DOE Office of Science from April 2013 to December 2015 when the Senate failed to vote on the nomination of Marc Kastner. It also took the Senate over a year to confirm Ellen Williams as ARPA–E director.

Some science-related nominees have withdrawn

A few of Trump’s more controversial science-related nominees have been forced to withdraw. Sam Clovis, Trump’s nominee for under secretary of agriculture for research, education, and economics, withdrew from consideration in November after he met criticism for his lack of scientific credentials and his name surfaced in the investigation of Russian election interference.

In December, toxicologist Michael Dourson withdrew from consideration to be EPA’s assistant administrator for chemical safety and pollution prevention after it became clear he could not win enough Republican votes for confirmation. Dourson’s research had drawn strong criticism for its ties to the chemical industry.

On Feb. 4, Kathleen Hartnett White, former head of the Texas Commission on Environmental Quality, withdrew from consideration to be chair of the White House Council on Environmental Quality. She had come under heavy criticism for her views on climate change, including her denial that carbon dioxide is a pollutant. Her record on issues such as ethanol, renewable energy, and radiation contamination in water may also have soured her chances.

Trump has named no new nominees to those three positions.

Although it is not a Senate-confirmed position, the Trump administration suffered a further blow on Jan. 31, when Brenda Fitzgerald, director of the Centers for Disease Control and Prevention since July 2017, resigned after news surfaced she had purchased stocks in tobacco, pharmaceutical, and health insurance companies after taking on her new role.

To stay up to date on science-related nominations, consult the Federal Science Leadership Tracker on the FYI website.