A new American Physical Society survey finds the number of international students applying to U.S. physics Ph.D. programs fell by an average of 12 percent from 2017 to 2018.

The number of international students applying to U.S. physics Ph.D. programs fell by an average of 12 percent from 2017 to 2018, according to new data from a survey conducted by the American Physical Society, an AIP Member Society.

APS staff decided to conduct the survey after hearing about large drops in the number of applications at the society’s annual meeting in March, APS Chief Government Affairs Officer Francis Slakey told FYI. “As the results came in, we realized that the problem was widespread. I checked with colleagues from other professional societies and found that they were seeing similar alarming drops,” Slakey said.

The findings follow reports of drops in international student applications and first-time enrollment at other U.S. graduate programs, including STEM programs. While there may not be a single explanation for the declines, a recent report from an international education organization notes some educational institutions have cited recent immigration policy changes and the current U.S. political environment with respect to international visitors as contributing factors. Another factor cited was increased global competition for international students.

APS sent the survey in April to department chairs of 74 U.S. physics Ph.D. programs that graduate 10 or more students per year. Institutions were asked to report the number of international applications they received in fall 2017 and fall 2018. A total of 49 institutions responded, including 15 private and 34 public institutions. Of the responses received, 13 institutions reported application decreases greater than 20 percent. Only seven programs reported increases. The full survey is confidential, but APS has allowed FYI to report certain summary statistics.

Larger programs, as measured by number of graduate students applying, reported significantly smaller decreases. Programs that received over 200 international applications in 2017 saw an average 6 percent decrease, whereas those receiving fewer than 100 international applications in 2017 observed an average 20 percent decrease. Not all responding institutions reported the total number of applicants.

In response to the survey’s findings, APS plans to use its June Congressional Visit Days, convening in Washington this week, to talk with members of Congress and their staff about how international students contribute to the U.S. economy and to advocate visa policy changes that would incentivize students to come to the U.S. and remain after graduation.

Whether the large drop in the number of international applications to some Ph.D. physics programs will affect their enrollment levels is not clear. According to the AIP Statistical Research Center (SRC), U.S. physics Ph.D. programs have had relatively stable international first-time enrollment rates since 2005, as shown in the following chart. 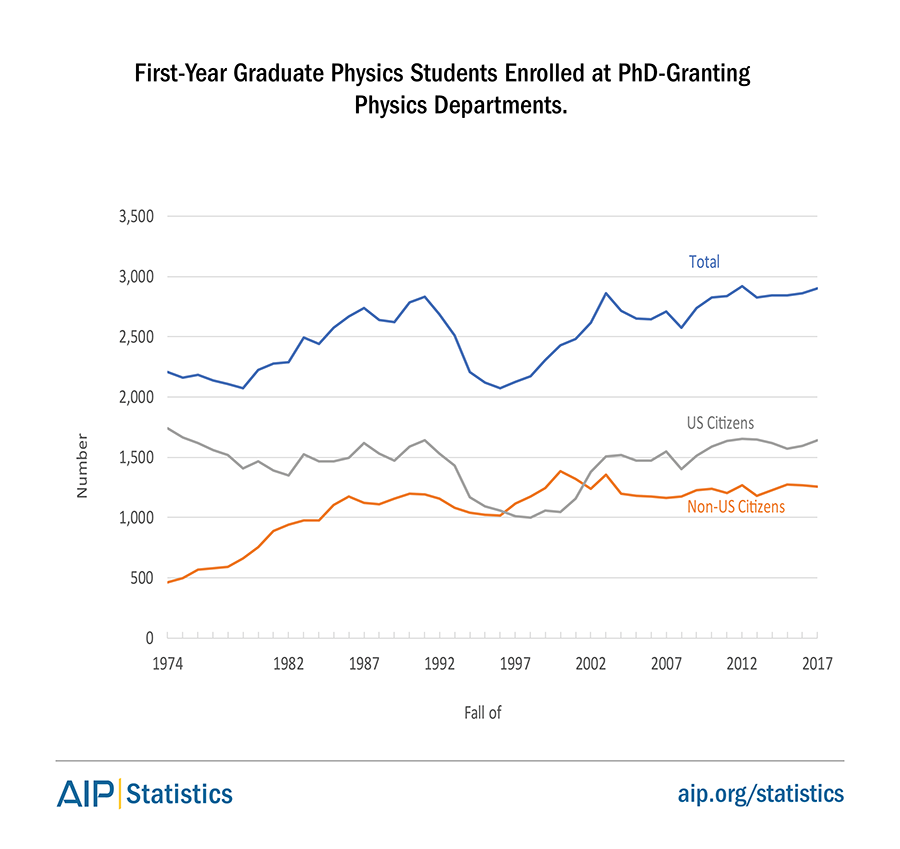 While data on the number of applications is not available for U.S. physics Ph.D. programs in prior years, a report from the Council of Graduate Schools (CGS) found international applications and first-time enrollment rates for U.S. graduate programs both fell slightly in 2017, the first time since 2004 when CGS first began collecting the data. 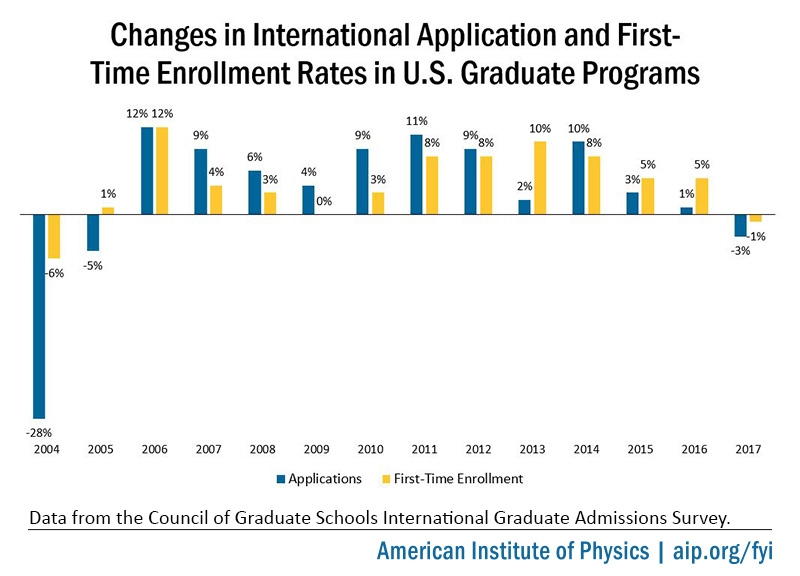 However, the report notes that the extent of the declines vary among programs, most strongly impacting enrollment in non-Ph.D. programs and institutions not classified as high-research activity doctoral institutions. By contrast, first-time enrollment in doctoral programs modestly grew by 1.8 percent among all institutions in 2017.

While a number of factors could be affecting international graduate student enrollment and application rates, the international application declines come at a time when President Trump has been pushing for changes in U.S. immigration policies.

A recent survey of over 500 higher education institutions from the Institute of International Education found that visa concerns, the current U.S. social and political climate, and global competition were cited among the reasons for declining international student enrollment rates seen in 2017. 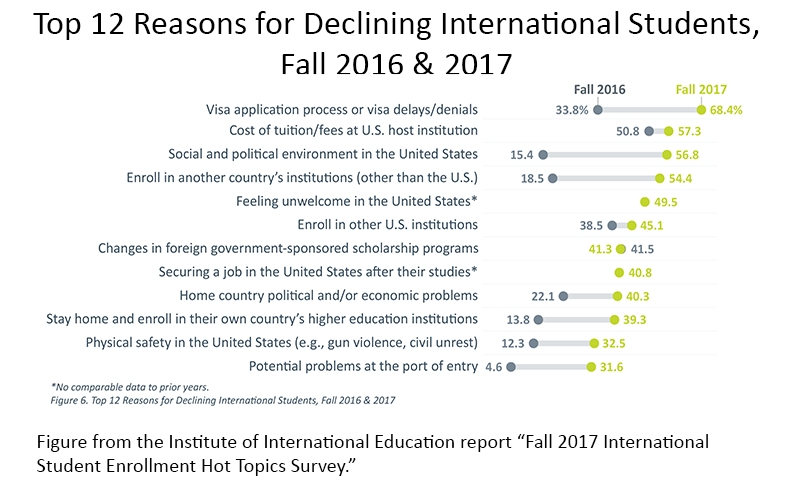 The top 12 factors higher education institutions cited as key factors contributing to the declines in first-time enrollment of international students in fall 2016 and 2017.

The number of institutions citing concern over the visa application process increased by 35 percentage point increase between 2016 and 2017. In line with those findings, the Wall Street Journal reported in March that immigration attorneys and education institutions point to stricter visa application scrutiny as a contributing factor in the 17 percent drop in student visas issued in 2017.

The State Department is currently working to intensify its vetting of visa applications, which science and education groups have warned would cause lengthy processing times and discourage students from seeking to come to the U.S.

While the Trump administration’s travel ban proposals have affected student entry from a limited number of countries, almost half of the institutions surveyed said the broader U.S. social and political debate surrounding immigration policy and other issues has contributed to enrollment declines.

Several U.S. graduate physics program heads suggested the rise of global competition in STEM research and education could also be contributing to recent declines. Reacting to the APS survey results, Chris Neu, director of graduate admissions in physics at the University of Virginia told FYI in an email, “The quality of international Ph.D. programs has (perhaps) increased.” He said a number of major science experiments are being considered for facilities in Asia, including “major endeavors in China and Japan in future particle accelerators.”

Warren S. Warren, physics department chair at Duke University, said the large investments that China in particular has made in laboratories and recruiting scientific talent have dramatically improved the caliber of its science. While he said Chinese students still travel abroad in large numbers to obtain graduate degrees, he predicted,

There’s every reason to believe that’s going to change over the next decade or two, simply based on the very large funding levels associated with basic science in China relative to the challenges in place [in the U.S.].