An agreement to renew an expired mandatory funding stream for Minority Serving Institutions will also make it permanent, with advocates praising the deal’s implications for STEM education.

Congress passed legislation yesterday that makes permanent a funding stream that provides $255 million per year to Minority Serving Institutions (MSIs) outside of the ordinary appropriations process. The funding, some of which supports STEM programs, had been in limbo since its legislative authorization expired on Oct. 1.

The chair of the Senate’s education policy committee, Sen. Lamar Alexander (R-TN), had blocked attempts to extend the funding for two years in favor of a permanent extension that he tied to broader updates to the Higher Education Act, which governs federal support for colleges and universities. Late last week, Alexander and the committee’s top Democrat, Sen. Patty Murray (D-WA), reached an agreement to couple the funding with a provision he had long advocated to simplify the process of applying for federal student aid.

The bill has since moved quickly through floor votes in the Senate and House and now awaits the signature of President Trump, who has tweeted his approval of the agreement. 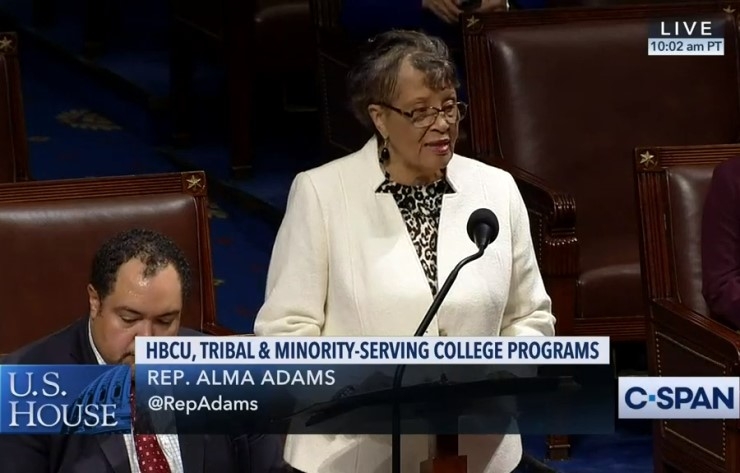 Rep. Alma Adams (D-NC) speaks in support of the FUTURE Act on the House floor on Dec. 10.

As the debate over the program’s fate came to a head, representatives of MSIs and members of Congress often drew attention to how the funding supports STEM education.

Writing to Congress in October about the potential for faculty cuts due to the lapsed authorization, Thurgood Marshall College Fund President Harry Williams stated, “These are real jobs, held by people who interact with students every day, in programs that play a critical role in graduating and retaining students in the STEM fields, among other disciplines.”

In a floor speech prior to the House vote yesterday, Rep. Alma Adams (D-NC), who introduced the original extension bill in May, applauded that the final legislation provides long-term certainty to schools. “A permanent reauthorization means that for the rest of time, long after we are all gone, diverse college students can count on a robust investment from their federal government,” she said.

Rep. Bobby Scott (D-VA), who chairs the House Education and Labor Committee, pointed in his floor speech to the outsized role of Historically Black Colleges and Universities (HBCUs) in STEM education, saying they “make up less than 3% of colleges and universities, yet they produce almost 20% of all black graduates, half of all black professionals, and over a third of all black STEM graduates.”

Rep. Dusty Johnson (R-SD) noted that tribal colleges in his state are using funds from the program to support STEM, adding, “We also know what a large role STEM is playing in our country today, and we know that it will play an even larger role in the future.”

In a statement applauding the action by Congress, UNCF President Michael Lomax said, “With this now-permanent funding, we know HBCUs can make a sizeable dent in the 2.5 million STEM jobs currently unfulfilled in our country.”