The 116th Congress has ushered in new leaders for several committees with jurisdiction over science agencies.

The House and Senate committees with jurisdiction over science agencies have now finished filling out their leadership positions. These “authorization” committees conduct oversight of federal R&D programs and are gatekeepers for science policy legislation. Funding is handled through separate appropriations committees, which have also finished organizing for the current Congress.

The authorization committees have seen considerable turnover, with the Democratic takeover of the House bringing new leadership to all its committees and the departure of some Senate members reshuffling key leadership positions in that chamber.

This bulletin reviews the committees and subcommittees most relevant to the physical sciences, except for the House Science Committee, which is covered in a separate bulletin. To keep up to date on science policy leadership in Congress and federal agencies, consult FYI’s Federal Science Leadership Tracker. 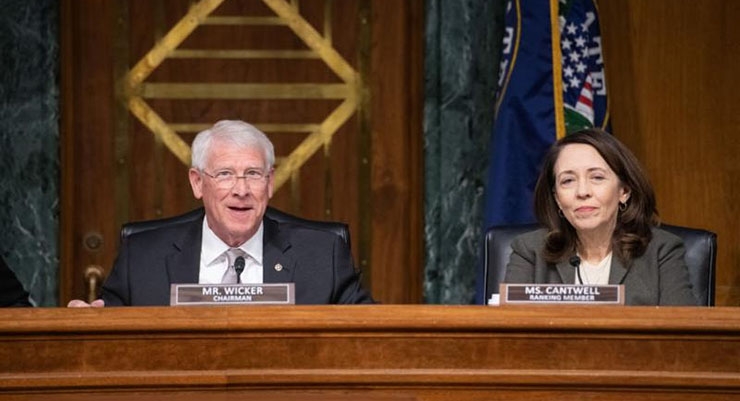 As the committee’s ranking member, Sen. Maria Cantwell (D-WA) succeeds Sen. Bill Nelson (D-FL), who lost his seat in the November election. Cantwell spoke briefly about her views on the importance of science at the committee’s first meeting. To take on the role, she had to relinquish her previous position as ranking member of the Senate Energy and Natural Resources Committee, though she retains a seat on it.

The Commerce, Science, and Transportation Committee has adopted an updated subcommittee structure in the new Congress, which includes two panels with major science policy portfolios.

The Science, Oceans, Fisheries, and Weather Subcommittee has jurisdiction over NSF, NOAA, NIST, and OSTP, which was previously split between two subcommittees. The new subcommittee is chaired by Sen. Cory Gardner (R-CO), whose state hosts various NOAA and NIST facilities as well as the National Center for Atmospheric Research, which is largely funded by NSF. Gardner has been active on science policy in recent years, serving as a lead sponsor of the American Innovation and Competitiveness Act. As chair of the Energy Subcommittee on the Energy and Natural Resources Committee during the last Congress, he took a strong interest in the Department of Energy’s national laboratories, particularly the Colorado-based National Renewable Energy Laboratory. Sen. Tammy Baldwin (D-WI) is the subcommittee’s ranking Democrat.

The Aviation and Space Subcommittee has jurisdiction over NASA, the Federal Aviation Administration, and the National Space Council. Sen. Ted Cruz (R-TX), who chaired the space subcommittee in the last two Congresses, is taking the gavel once again. At the end of the previous Congress, he and Nelson introduced a broad NASA reauthorization bill that will likely serve as a starting point for the committee’s work this year. The ranking member of the subcommittee is Sen. Kyrsten Sinema (D-AZ), who joins the Senate this year after serving in the House since 2013. 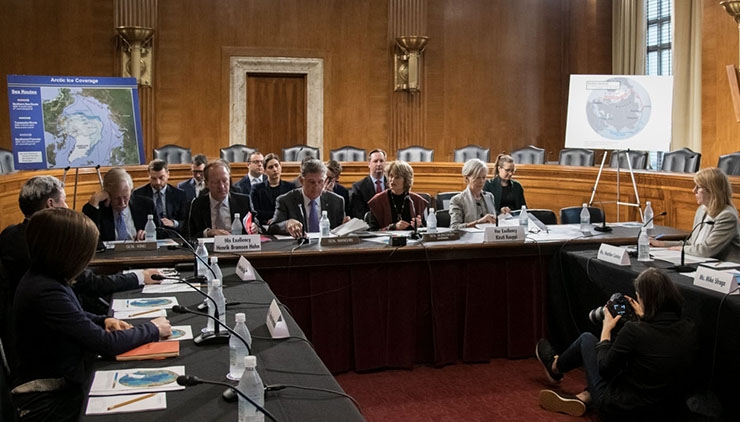 Sens. Joe Manchin (D-WV) and Lisa Murkowski (R-AK), at center, hosting a roundtable to discuss challenges and opportunities in the Arctic region.

Sen. Lisa Murkowski (R-AK) returns as chair of the Senate Energy and Natural Resources Committee, which has jurisdiction over the Departments of Energy and the Interior. During her term as chair, which expires at the end of this Congress, Murkowski has been a vocal proponent of DOE’s R&D programs, opposed proposals to shut down the Advanced Research Projects Agency–Energy, co-sponsored the National Quantum Initiative Act, and spearheaded several legislative efforts to bolster natural hazards preparedness.

Sen. Joe Manchin (D-WV) is taking the place of Sen. Maria Cantwell (D-WA) as the committee’s top Democrat. In a statement on his selection as ranking member, Manchin said he intends to pursue an “all-of-the-above” energy policy and work to ensure his state remains a “leading energy producer and major contributor to advanced energy technologies.” A branch of DOE’s National Energy Technology Laboratory is located in Morgantown, West Virginia.

Sen. Martin Heinrich (D-NM) is taking Manchin’s former spot as ranking member of the Energy Subcommittee. Heinrich has been a vocal advocate for DOE’s Los Alamos National Laboratory and Sandia National Laboratories, which play a significant role in New Mexico’s economy. Sen. Bill Cassidy (R-LA) has taken over for Gardner as chair of the subcommittee. Cassidy has advocated for improvements to oil and natural gas infrastructure, which would benefit the energy industry in his state. 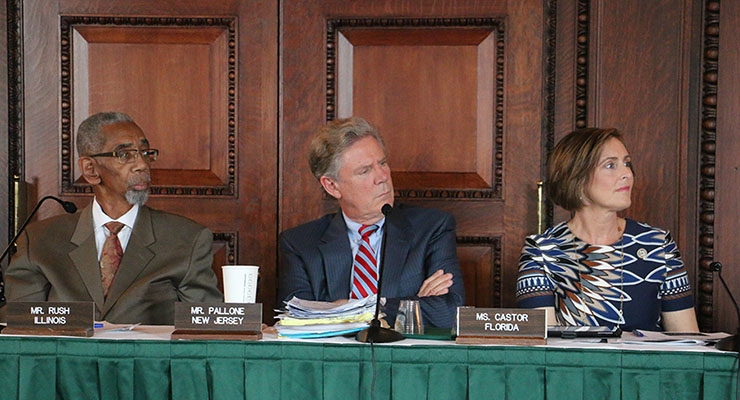 Rep. Frank Pallone (D-NJ) is the new chair of the House Energy and Commerce Committee, which has jurisdiction over the Department of Energy, Nuclear Regulatory Commission, National Institutes of Health, and Environmental Protection Agency, among other agencies. (Science activities at DOE are under the purview of the House Science Committee.) Pallone has served as the committee’s top Democrat since 2015. The committee has retained its previous subcommittee structure, though Pallone renamed the environment-focused subcommittee to reflect his planned emphasis on climate change. Rep. Greg Walden (R-OR) remains the committee’s top Republican and has expressed interest in working with Democrats to consider “innovation”-based approaches to addressing climate change in a recent op-ed he penned with two other Republican leaders on the committee.

Reps. Bobby Rush (D-IL) and Fred Upton (R-MI) return as the leaders of the Energy Subcommittee. In a statement following his selection as chair, Rush said he will “stand up for marginalized communities and work every day to ensure that a modern energy workforce represents all Americans.”

The Environment and Climate Change Subcommittee is retaining Reps. Paul Tonko (D-NY) and John Shimkus (R-IL) as its leaders. Tonko has said he plans to “work to avoid the mounting costs of climate inaction and environmental mismanagement, fight back against suspicious Trump administration rollbacks of clean air and climate rules, and advance legislation that will significantly reduce emissions.”

The House and Senate Armed Services Committees have jurisdiction over the Department of Defense and DOE’s National Nuclear Security Administration.

Reps. Mac Thornberry (R-TX) and Adam Smith (D-WA) have swapped positions atop the House committee, while Sen. Jim Inhofe (R-OK) has become chair of the Senate committee following the death of Sen. John McCain (R-AZ). In a recent speech, Inhofe said the U.S. needs to modernize its nuclear arsenal and “accelerate our investment in key technologies like artificial intelligence, quantum science, and hypersonics” in the face of competition from China and Russia. Sen. Jack Reed (D-RI) returns as the top Democrat on the committee. Reed has likewise called for increased investments in artificial intelligence, hypersonics, and quantum R&D, but he and Smith have been skeptical of the administration’s nuclear modernization plans.

In the House, Reps. Jim Langevin (D-RI) and Elise Stefanik (R-NY) return as the top members of the Emerging Threats and Capabilities Subcommittee, which oversees DOD R&D activities, while Sen. Joni Ernst (R-IA) remains chair of the counterpart subcommittee in the Senate. Sen. Gary Peters (D-MI) is the new ranking member of the subcommittee, taking the spot previously held by Sen. Martin Heinrich (D-NM).

Heinrich now is the ranking member of the Strategic Forces Subcommittee, which oversees NNSA, succeeding Sen. Joe Donnelly (D-IN), who lost his seat in the November election. Rep. Mike Turner (R-OH) has replaced Rep. Mike Rogers (R-AL) as ranking member of the Strategic Forces Subcommittee in the House, while Rep. Jim Cooper (D-TN) has become chair. Turner was previously the top Republican of the subcommittee from 2009 to 2011.

The House’s Democratic majority has created a Select Committee on the Climate Crisis, reviving a similar panel that existed from 2007 to 2011, the last time they held the chamber. Unlike standing committees, the select committee will not be authorized to consider legislation or issue subpoenas, though it may recommend such actions to other committees. The select committee’s primary objective will be to gather information and produce findings. It will be chaired by Rep. Kathy Castor (D-FL), a House Energy and Commerce Committee member who represents a coastal district in Florida. Republicans have not yet announced any committee members, including their ranking member.

The House Intelligence Committee has adopted a new structure that includes a Strategic Technologies and Advanced Research Subcommittee. The panel will oversee the “development and implementation of emerging and advanced technologies that are essential to intelligence collection and national security” and work to ensure the U.S. “remains at the cutting edge in overhead systems, artificial intelligence/machine learning and computing, as well as data and systems integrity.” Reps. Jim Himes (D-CT) and Chris Stewart (R-UT) will serve as the subcommittee’s chair and ranking member, respectively. 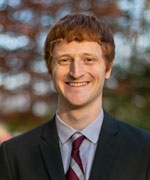