Now at the helm of the House Science Committee, Rep. Eddie Bernice Johnson (D-TX) is working with the committee’s Republican minority to advance her marquee bill to increase diversity in STEM fields. 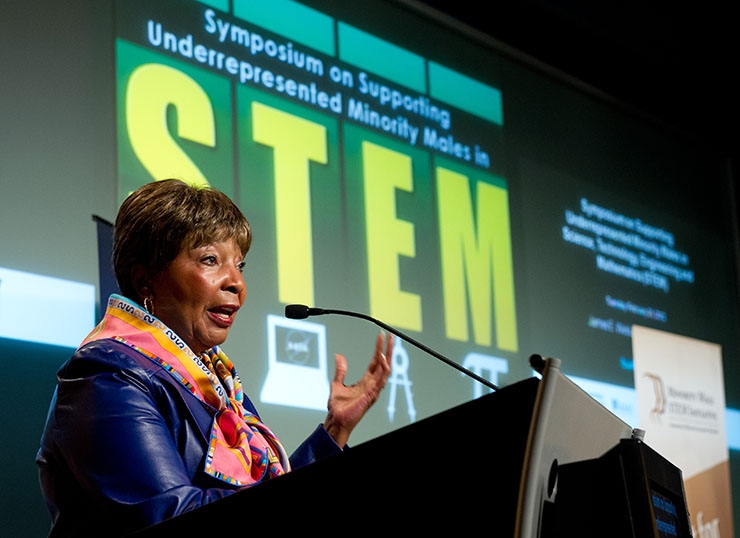 On May 7, House Science Committee Chair Eddie Bernice Johnson (D-TX) reintroduced the STEM Opportunities Act, a bill she has championed during the past three Congresses that seeks to increase the participation of underrepresented groups in STEM fields. Notably, this is the first time she has introduced the bill with Democrats in control of the House, and it is also the first time the bill has found a Republican cosponsor, Science Committee Ranking Member Frank Lucas (R-OK).

The legislation would expand collection of demographic data on federal research grant applicants and promote the identification and dissemination of best practices for increasing diversity in STEM. It also emphasizes the National Science Foundation’s role in supporting research and initiatives related to broadening participation.

At a May 9 hearing on the bill, Johnson noted it was the first time the Science Committee had held a hearing on STEM diversity since 2010. Citing stagnant participation rates of underrepresented groups in fields such as physics and engineering since that time, she remarked, “We have a lot of work to do. As chairwoman of the Science Committee I am determined to do what I can to move the needle.” In his remarks, Lucas thanked Johnson for her leadership on the issue and noted that, in addition to the STEM Opportunities Act, he looks forward to working on legislation focused on rural students.

The STEM Opportunities Act would substantially expand current federal efforts to collect demographic information. It would require agencies with annual R&D budgets greater than $100 million to collect demographic data on all grant applicants, which would then be aggregated and summarized by NSF. Another provision requires NSF to carry out a survey of STEM faculty demographics at U.S. institutions of higher education at least every five years.

The bill also instructs NSF to support research that uses the data and to back efforts to improve undergraduate STEM education and increase the diversity of faculty. The agency is currently focusing its efforts in this area through its INCLUDES program.

To promote the use of best practices across STEM diversity efforts, the bill includes a number of directions for the White House Office of Science and Technology Policy. These include collecting and disseminating guidance to universities and federal laboratories on addressing cultural and institutional barriers to recruiting, retaining, and advancing members of underrepresented groups in STEM positions. A separate provision would require OSTP to issue guidance to agencies on providing flexibility to grantees who take on caregiver roles, such as for a newborn child or sick family member. A third provision would require agencies to implement recommendations from a 2016 report by OSTP and the Office of Personnel Management on reducing bias in grant application reviews, hiring procedures, and workforce policies.

A new provision in the latest version of the bill directs NSF to target grants toward computer science education within its Tribal Colleges and Universities Program. Lucas highlighted the provision at the May 9 hearing, remarking, “It is important that we also increase STEM opportunities for American Indian and Alaska Native students, who are often overlooked in this discussion. … Access to computer science resources and the development of computing skills is critical for underrepresented students in both rural and urban communities.” 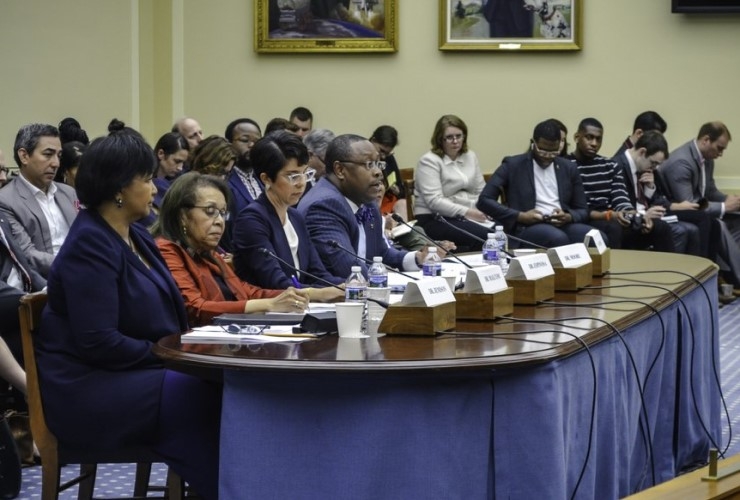 Mae Jemison, the first woman of color to be an astronaut, offered advice based on her personal experiences and work as chair of a forthcoming National Academies study on addressing the underrepresentation of women in STEM fields. In her written statement, she elaborated on the barriers women face in their careers, such as biases in recruitment and authorship credit, larger teaching loads, and harassment. Noting the compounding effects of racial and ethnic discrimination, she added, “Such experiences contribute to a double bind in which women of color experience increased bias at key career junctures and often hostile environments.”

Concerning why it has been so difficult to make progress, Jemison asserted,

Commitment and actions to effectively implement and sustain change means upsetting the status quo. Those comfortable, resourced, and well positioned in the existing culture — male and female, majority and minority — will be uncomfortable.

Lorelle Espinosa, vice president for research at the American Council on Education, a higher education association, highlighted recommendations of a recent National Academies report she co-chaired on the role of Minority Serving Institutions in educating STEM workers. She advocated for “new and expanded funding mechanisms that strengthen STEM infrastructure and encourage innovative teaching, learning, and laboratory experiences” at such institutions, as well as increased data transparency and evaluation on the impacts of these investments on career outcomes.

Offering a view from the private sector, Barbara Whye, Intel’s chief diversity and inclusion officer, recommended more should be done to hold institutions accountable for making progress. She suggested the committee include provisions that require “concrete measurable outcomes related to expanding availability and access to STEM offerings for students from pre-K to college, increasing diverse faculty representation, and increasing the employability of students that complete a STEM education.”

The STEM Opportunities Act joins several other bills currently pending in Congress that aim to improve the accessibility and culture of STEM education and careers.

Early this year, Johnson and Lucas reintroduced the Combating Sexual Harassment in Science Act, which Johnson initially introduced late in the last Congress. The bill would require OSTP to create uniform guidelines for science-supporting agencies as they develop policies for combating harassment. It would also direct NSF to fund research on the impacts of harassment in the STEM workforce. Sen. Kamala Harris (D-CA) recently introduced companion legislation in the Senate.

Other bills include the bipartisan Building Blocks of STEM Act, which would direct NSF to increase its focus on early childhood education research, and the bipartisan Supporting Veterans in STEM Careers Act, which would expand data collection and outreach for veterans transitioning into the civilian STEM workforce. The Democrat-backed 21st Century STEM for Girls and Underrepresented Minorities Act would establish a new Department of Education grant program for local educational agencies to support STEM education programs focused on girls and underrepresented minorities.