Although the emission limits for 5G telecommunications are stricter than those proposed by the FCC, they may not be sufficient to prevent interference with weather-observing systems. 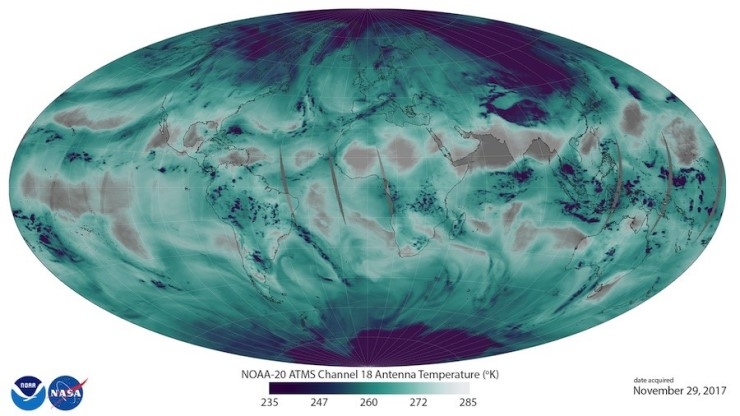 Atmospheric measurements at 23.8 GHz are used to determine the location and abundance of water vapor in the lower atmosphere. In this image, blue-green and purple areas contain more moisture than those depicted in transparent and gray colors. Purple at the poles represents snow and ice on the surface.

In a decision highly anticipated by both the telecommunications industry and the weather-forecasting community, on Nov. 22 the global organization tasked with managing radio-spectrum use announced new emission limits for deploying 5G technologies.

The standard set by the International Telecommunication Union Radiocommunication Sector (ITU-R) is more stringent than that proposed by the U.S. Federal Communications Commission (FCC). But many meteorologists remain concerned that high emission levels from 5G signals in the 24 GHz band will bleed into the 23.8 GHz frequency that weather satellites use to detect water vapor in the atmosphere.

Starting in 2020, telecom companies will be permitted to operate 24 GHz base stations that transmit radio signals to 5G-ready devices at an intensity limit of -33 decibel watts per 200 MHz; smartphones and other mobile stations can transmit at up to -29 dBW per 200 MHz. ITU-R spokesperson Sanjay Acharya says that each value “was chosen based on several aspects, including results from studies and values proposed” at last month’s World Radiocommunication Conference in Egypt, which brought together some 165 countries and more than 700 private companies and academic institutions.

Acknowledging that interference will increase as 5G networks expand and become denser, ITU-R members agreed to tighten the limits to -39 dBW per 200 MHz for base stations and to -35 dBW per 200 MHz for mobile stations on Sept. 1, 2027. The provisional summary document from the conference states that the 2027 limits will not apply to “stations which have been brought into use prior to this date.”

The ITU-R radio-emission levels are stricter than the -20 dBW per 200 MHz advocated by the FCC but looser than the range of -40 to -50 dBW per 200 MHz that the National Oceanic and Atmospheric Administration projected would ensure that its satellites could continue to collect accurate data. Earlier this year the two agencies publicly, and often heatedly, disagreed on the appropriate emission levels. In testimony to the House Science Committee on May 16, NOAA Acting Administrator Neil Jacobs referenced an agency analysis that found the FCC’s preferred level would decrease the water vapor data collected by 77%. 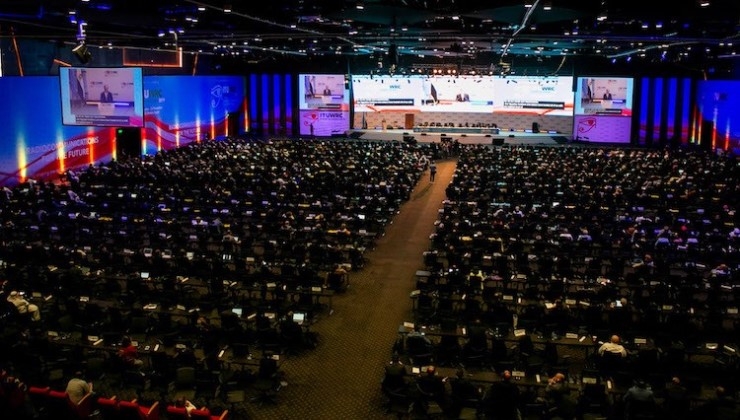 Delegates at the World Radiocommunication Conference in Egypt attend the closing plenary session on 22 November.

The ITU-R 5G emission levels are not binding. But the ITU-R rule is similar to an international treaty, and “usually the U.S. follows the treaty pretty well,” says Joel Johnson, an electrical and computer engineer at the Ohio State University. The FCC did not return a request for comment on the new ITU-R standard.

Quantifying the ramifications of more-limited water vapor measurements to meteorological models is difficult, says meteorologist Jordan Gerth of the University of Wisconsin–Madison. “Short-term weather forecasts for areas far away from cities where these 5G networks exist may not be impacted substantially,” he says. “Long-term forecasts downstream of big cities and populated areas may be impacted more.”

NOAA is trying to figure out the potential extent of interference with forecasting. In a Nov. 29 statement, the agency said that it “will perform additional analyses using the new standards agreed to at the World Radiocommunication Conference to identify any potential impacts on our observing systems.”

The weather forecasting community is exploring other options for collecting water vapor data. One potential solution to mitigate interference, known as geo-fencing, is to have wireless companies “essentially revert their transmissions momentarily to 4G” when key satellites are overhead, says Renée Leduc, a weather policy consultant at Narayan Strategy in Washington, D.C.

And although the 23.8 GHz frequency is important, it “is not the sole source of water vapor information,” Gerth says. “We have radiosondes, aircraft instrumentation, GPS, and other satellite bands that can complete the picture.”

Meanwhile, on Dec. 10 leaders of the House Science Committee asked the Government Accountability Office to launch an audit of how federal agencies resolve disputes over spectrum interference.

“The committee is deeply concerned with the disagreement between U.S. federal agencies on out-of-band emissions limits,” they wrote. “It is vital that federal agencies work through these issues in a manner that is independent of political motivation and driven by science.”

This article is adapted from a Dec. 9 post by Physics Today, which is also published by the American Institute of Physics.