Legislative efforts are under way in the House and Senate to advance broad policy legislation for NASA, with potential implications for scientific activities. In the House, lawmakers are seeking to exert particularly strong control over the agency’s plans for the Moon and Mars. 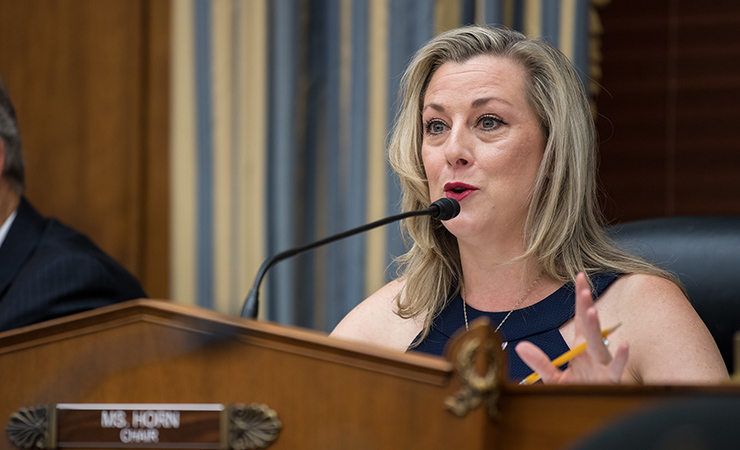 Leaders of the House Science Committee recently introduced a bipartisan NASA policy bill that, if enacted as it stands, would significantly impinge on the agency’s agenda for deep space exploration. In particular, although NASA is seeking to build a sustained presence on and around the Moon, the bill would stipulate that lunar operations be used primarily to prepare for exploring Mars.

Such a policy could have implications for scientific work. Bypassing an extensive lunar exploration campaign could, for example, curtail plans for a complementary lunar research agenda, while a stronger focus on Mars might motivate additional science missions to that destination.

Beyond the Moon and Mars, the bill also covers many other aspects of NASA policy and includes potentially significant proposals relating to two flagship science missions: the Europa Clipper and Wide Field Infrared Survey Telescope. However, extensive negotiations will likely precede the enactment of any legislation, not least since a substantially different NASA policy bill is already moving in the Senate.

Congress last updated NASA policy in 2017 through the NASA Transition Authorization Act, which was intended to steady the agency through that year’s handover in presidential administrations. Although President Trump signed the bill, he quickly refocused NASA’s crewed exploration efforts on the Moon and then last year pushed up the target date for a crewed lunar landing by four years to 2024.

In view of these shifts, Democrats on the House Science Committee have questioned whether NASA’s plans are well developed and if they are keeping the ultimate goal of Mars exploration in sight. The House bill’s primary sponsor, Space Subcommittee Chair Kendra Horn (D-OK), reiterated those concerns at a meeting on the bill on Jan. 29, noting it seeks to clarify what activities are and are not integral to executing a Mars exploration program.

Subcommittee Ranking Member Brian Babin (R-TX) explained that he and other Republicans disagree with aspects of the bill but signed onto it to keep their spot at the negotiating table. He stressed that, even in the bill's current form, it would not strictly bar NASA from pursuing its plans for developing the Moon’s resources and achieving a crewed landing by 2024.

Meanwhile, NASA Administrator Jim Bridenstine has expressed concerns that limiting lunar activities could prove “counterproductive” to Mars exploration and that provisions such as one requiring NASA to own its crewed lander would jeopardize the role of private companies in the agency’s long-term plans.

Moon to Mars program. A core element of the House bill is its proposal to officially establish a “Moon to Mars” program with the twin goals of conducting a crewed lunar landing by 2028 and a crewed mission to orbit Mars by 2033. It distinguishes between “critical enabling activities” deemed essential to achieving the Mars mission and “noncritical path activities” that would fall outside the program and be separately budgeted.

The Senate bill would more loosely require NASA to follow a “steppingstone approach to exploration” that retains the goal of Mars exploration but with a “timetable determined by the availability of funding.” Within that approach, NASA could undertake any mission that it deems “demonstrates or advances a technology or operational concept that will enable human missions to Mars.”

While the Senate bill would not specify a target date for an initial crewed lunar landing, it stipulates that NASA “establish sustainable lunar exploration by 2028.” The House bill, though, designates activities such as lunar resource utilization and establishing a continuously occupied lunar outpost or research station as outside the critical path.

Lunar science. Both the House and Senate bills support NASA’s Commercial Lunar Payload Services program, which aims to use privately operated landers to convey science and technology payloads to the lunar surface. The program is funded through the agency’s Science Mission Directorate, but the House bill would require other directorates to take responsibility for non-scientific payloads. The Senate bill would reinforce NASA’s plans to select payloads focused on studying “volatiles” such as water ice that are deposited in the Moon’s polar regions, citing their importance for “sustainable lunar exploration.”

Gateway. Both bills would support the Gateway outpost that NASA currently plans to begin building in lunar orbit ahead of a crewed landing. However, the House bill refers to it as the “Gateway to Mars” and states it would “not be required for the conduct of human landing operations” and could be built either in cislunar space or at a gravitationally stable Lagrange point beyond the Moon’s orbit. Delaying or moving the Gateway could affect plans for some of the scientific activities it might facilitate.

International Space Station. To free up funding for deep space exploration, NASA has proposed transferring its support for the ISS to commercial entities and has already moved to add a module for accommodating commercial visitors. The House bill, though, would extend the agency’s commitment to the station from 2024 through 2028 and prioritize work onboard it that contributes to the Moon to Mars program. The Senate bill would extend support for the ISS through 2030 and grant its commercial users unrestricted intellectual property rights to inventions they develop there.

Life and physical sciences research. The ISS hosts a suite of biological and physical sciences research projects and instruments that are currently managed as part of the station’s operations. The House bill would direct NASA to report on the prospect of transferring responsibility for those activities to the agency’s Science Mission Directorate. Both bills would also direct NASA to consider how it will continue those activities after the ISS is eventually decommissioned. 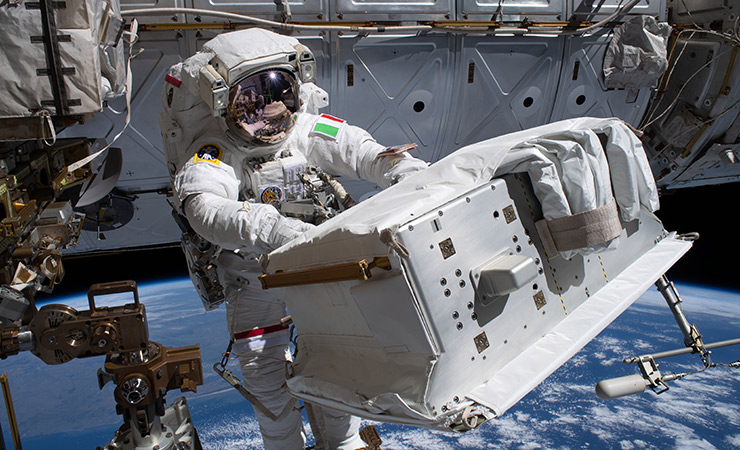 European Space Agency astronaut Luca Parmitano conducting a spacewalk in December 2019 to upgrade the Alpha Magnetic Spectrometer, a cosmic ray detector installed on the exterior of the International Space Station.

Robotic Mars missions. The House bill would require NASA to develop a plan for a mission to retrieve samples that will be cached by its Mars 2020 rover, which is scheduled to land one year from now. The Senate bill would require NASA to carry out at least one mission to identify one or more sites for a crewed Mars landing and authorize NASA to conduct a sample return mission. NASA is currently in the early stages of planning a sample return mission for launch as early as 2026.

Mars communications infrastructure. Orbiters currently operating at Mars play a vital role in transmitting scientific data from surface missions, but there are concerns about how long they will endure. The House bill would direct NASA to plan how it will maintain this infrastructure “into the 2040s,” weighing the relative advantages of a dedicated communications orbiter and a science mission doubling as a communications relay.

Europa Clipper. Congress has previously required that NASA launch the Europa Clipper mission using the Space Launch System heavy-lift rocket it is developing. Although the rocket would shave years from the mission’s flight time, NASA has pushed back on the directive in view of the rocket’s expense and potential lack of availability when the mission is ready to launch. The House bill would direct NASA to select a launch vehicle “taking into account the probability of mission success and based on cost, schedule, vehicle availability, and impact on science requirements.”

Wide Field Infrared Survey Telescope. The House bill would direct NASA to update Congress quarterly on WFIRST’s adherence to the cost and schedule baseline that the agency will establish following the impending completion of the mission’s confirmation review. The provision could signal a willingness to substitute careful program management for the $3.2 billion cost cap Congress has previously placed on the mission. In contrast, the Senate bill expresses support for the cap.

“Missions of national need.” The Senate bill observes that NASA’s mission selection procedures favor scientifically compelling projects at the expense of ones focused on matters such as asteroid detection and space debris mitigation. The bill would direct the White House Office of Science and Technology Policy to study options for how NASA or other agencies could better support such “missions of national need.” The Senate Commerce, Science, and Transportation Committee convened a hearing on these sorts of missions on Feb. 12, signaling its strong interest in the topic.

Near-Earth objects. Both bills would direct NASA to develop its Near-Earth Object Surveillance Mission and to flesh out plans for detecting and tracking NEOs and working on NEO deflection and impact mitigation with international partners. The House bill would also direct NASA to plan scientific and public outreach activities for when NEOs pass close to Earth, specifically mentioning the expected 2029 encounter with asteroid 99942 Apophis.

Orbital debris. The House bill would require NASA to develop a research and technology strategy for tracking and mitigating collision hazards in orbit, including orbital debris and rapidly growing constellations of small-scale satellites. The bill would also direct NASA to collaborate with international partners on debris removal efforts and to identify gaps in capabilities for monitoring debris as small as a millimeter in size.