Scientific societies and university associations have proposed emergency measures to address disruptions to the research enterprise from the coronavirus pandemic, hoping Congress will include them in its next broad relief package. 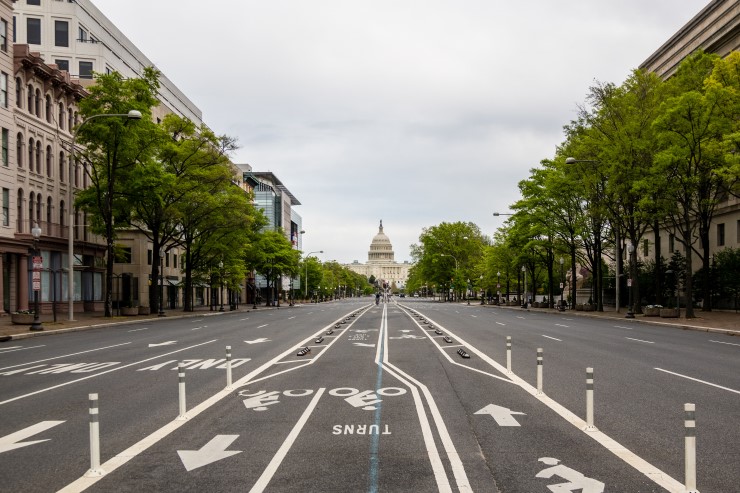 View of the U.S. Capitol building during the coronavirus pandemic.

After passing a roughly $2 trillion pandemic response package last month, Congress is already moving on to the next steps of its response. It is currently completing work on a nearly $500 billion package to shore up health infrastructure and business loan provisions included in the previous package. After that, lawmakers expect to begin work on legislation to provide additional support to the broader economy.

While last month’s package included emergency funding for federal science agencies and universities, research organizations are hoping there will be additional measures in the next broad bill and have outlined their requests in letters to congressional leaders.

Colleges and universities are beginning to receive funds from the $14 billion in relief grants for educational institutions that Congress has already provided. However, much of the money is set aside for relief to students rather than directly addressing disruptions to research.

Making the case for direct research relief, a coalition of four major U.S. university associations sent a letter to Congress on April 7 advocating that it allocate $26 billion across major federal science agencies to shore up extramural research programs. They state the funding should be used to cover additional costs that grant and contract recipients have incurred due to the pandemic, to pay personnel and cover the base operating costs of shuttered research facilities and services, and to extend funding for up to two years for graduate students, postdocs, and other personnel whose career tracks have been upended.

“Given the current shutdown of many university-based and national laboratories due to the pandemic, we are deeply concerned that the people who comprise the research workforce — graduate students, postdocs, principal investigators, and technical support staff — and the future health and strength of the U.S. research enterprise, are at risk,” the letter states.

The recommended funding supplement is double the request that the associations made for science agencies in mid-March, and which Congress did not include in its relief package. The letter states the original amount was based on a “best estimate of two months of research slowdowns, laboratory closures, and identifiable harm to our research workforce and capabilities” and that the revision reflects a new appreciation that the pandemic’s impacts will be larger than originally anticipated.

The associations also ask Congress to “urge or require” science agencies to issue uniform policies that provide flexibility in how grant and contract funds can be used to support research personnel during the pandemic. They state that not all agencies have taken advantage of such grant flexibilities provided by the White House Office of Management and Budget in a March 19 memorandum. They also request that Congress direct the White House and agencies to temporarily relax regulatory and audit compliance requirements during the pandemic and for a year afterwards. The associations further ask that the State Department and U.S. Customs and Immigration Service be given resources needed to process visa applications and renewals, given challenges international students and researchers are facing in entering the country.

Aside from proposing direct support for research, a broader set of higher education associations has also asked Congress to bolster the education sector with a separate $46 billion in emergency funding, tax changes, and student loan relief.

In early April, the House Science Committee solicited input from stakeholders in the research community concerning needs within its jurisdiction that future pandemic response packages could address. Among the scientific societies to respond, the American Physical Society proposed various supplemental funding and policy measures to support the eventual restart of labs as well as address disruptions to the domestic and international research workforce. (APS is an AIP Member Society.)

APS calls for agencies to “immediately provide guidance to program managers to relax grant submission deadlines,” stating there are many cases of deadlines not being extended for programs at the Department of Energy and National Science Foundation. The society further expresses appreciation for the White House allowing grant funds to be used to maintain pay for researchers and graduate students while labs are shut down and asks for full or partial extensions of grant costs to enable projects to finish with revised end dates.

APS also suggests that funding for the Research Experiences for Undergraduates program be substantially increased in 2021 to make up for lost opportunities this summer and that domestic scholarship programs be enhanced to address an expected near-term decrease in international student enrollment. Highlighting how the pandemic has led many international students to return to their home countries due to institutional closures in the U.S., APS asks that resources be allocated to processing the backlog of pending visa renewals and new nonimmigrant visas.

Several other societies that responded to the committee drew attention to similar funding and workforce needs, while also making other discipline-specific requests. For instance, the American Chemical Society proposed expanding small business loans, noting many companies in the chemistry enterprise have less than 500 employees, and called for a “long‐term extension” of the Chemical Facility Anti‐Terrorism Standards to provide regulatory certainty to the chemistry industry amid the pandemic.

Among the recommendations from the American Geophysical Union are a proposal to mitigate the effects of postponed fieldwork and missing field observations, pointing to the reduction in weather observations by commercial aircraft as an example. AGU also suggests that future economic stimulus legislation could address deferred maintenance backlogs within agencies such as the U.S. Geological Survey and National Park Service, noting that degraded facilities affect Earth scientists’ ability to study federal lands.

Coalitions of societies have also outlined options for investment in “shovel ready” research infrastructure. For instance, the Coalition for National Science Funding, which advocates for NSF, suggested in its proposal that Congress provide a one-time infusion to the agency’s midscale research infrastructure program to address the large unmet demand for such projects. The Energy Sciences Coalition, which advocates for the DOE Office of Science, proposed that at least $10 billion be provided to the office for coronavirus response and infrastructure stimulus activities.