The Department of Energy’s National Nuclear Security Administration is facing a historic workload as it pursues a comprehensive modernization of the U.S. nuclear weapons stockpile and associated infrastructure. In support of this effort, Congress raised funding for NNSA by 5% to $20.7 billion for fiscal year 2022, continuing a string of increases that have nearly doubled its budget over the last seven years.

The Biden administration has requested a further 4% increase for fiscal year 2023, which Republicans have argued is inadequate given the current high inflation rate and the increasing tensions with both Russia and China. Lawmakers and defense officials have expressed particular concern over China’s rapidly expanding nuclear arsenal.

Within the overall proposed increase, funding for nonproliferation activities would remain flat at about $2.35 billion and some science programs would be squeezed. For instance, the administration requests a 6% cut to the Inertial Confinement Fusion program despite its recent near achievement of fusion ignition, a goal that has long seemed distant.

Detailed congressional direction for fiscal year 2022 is included in an explanatory statement accompanying the appropriations legislation, as well as in reports prepared by House and Senate appropriators. Summary figures for the appropriation and the request are compiled in FYI’s Federal Science Budget Tracker.

NNSA’s Stockpile Research, Technology, and Engineering (RTE) account funds activities that enable the U.S. to certify the reliability of nuclear weapons without resorting to explosive testing. The account is decreasing by 1% to just under $3 billion for fiscal year 2022, and the administration now proposes a further 3% cut. (These figures reflect a budget restructuring proposed in the fiscal year 2023 request.)

Proposed cuts to science programs are attributed broadly to a “reprioritization of resources to support higher priority NNSA programmatic efforts.” Priority initiatives include ongoing construction of a plutonium imaging facility needed to certify future warheads and initial design work on a facility that would study the ability of nuclear weapons to withstand multiple radiation stressors. 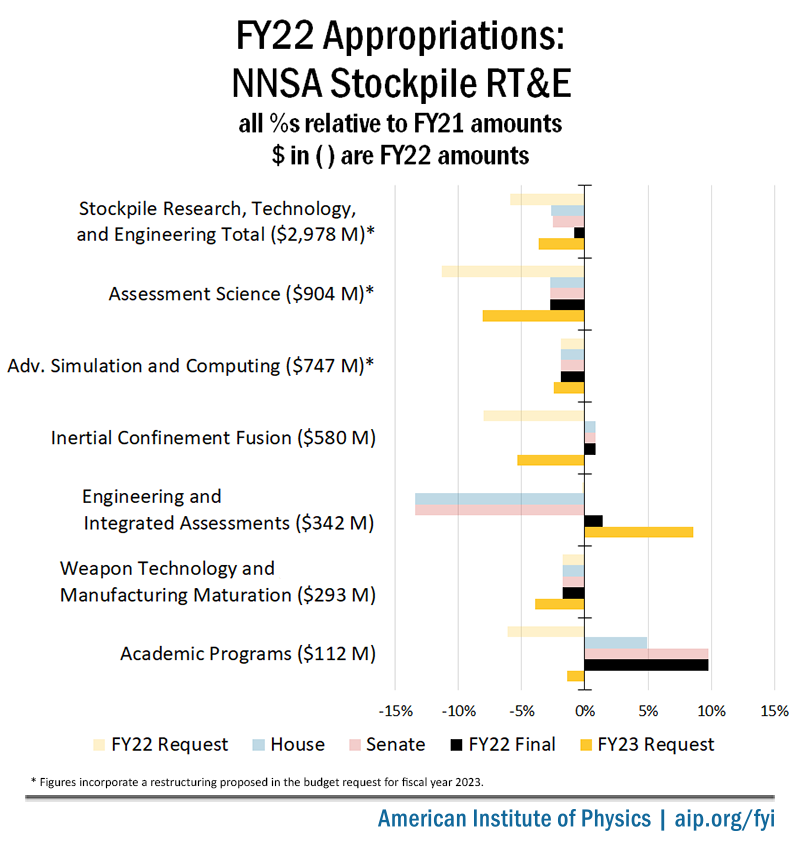 For fiscal year 2023, the administration requests a $36 million cut to the ICF program and again proposes to terminate its contribution to the Nike laser. It does not specify budgets for the other facilities.

Discussing NIF’s record-breaking experiment, NNSA notes the result exceeded the expectations of a recent internal review that concluded achieving fusion ignition is “likely beyond current experimental capabilities.” However, NNSA states the review’s priority recommendations “largely remain valid” and entail a focus on “resolving key gaps in physics understanding,” assessing the justification for “any future experimental capability investments,” and attracting early-career researchers to NIF as well as Z and OMEGA.

NNSA observes these facilities each are more than 10 years old and have “urgent needs for refurbishment.” It adds, “Over the next five years, a significant investment will be made to sustain the ICF facilities and assure their continued contributions to stockpile stewardship in the 2030s.”

Outside the NNSA budget, the DOE Office of Science requests $3 million to launch a program to research the prospects of generating energy from inertial fusion. Congress directed the office to establish such a program through the Energy Act of 2020, recommending an initial budget of $25 million.

Plutonium imaging facility. As part of its stockpile certification efforts, NNSA conducts “subcritical” plutonium implosions, which do not generate nuclear yield. To address gaps in physics understanding needed to certify future weapons, NNSA is building a facility to enable “cinematographic” imaging of such implosions, comprising an X-ray machine called Scorpius that will be housed underground in the U1a Complex at the Nevada National Security Site. These efforts are funded through the U1a Complex Enhancements Project and the separate Enhanced Capabilities for Subcritical Experiments (ECSE) program, which supports Scorpius through a project called Advanced Sources and Detectors (ASD).

Congress provided level funding of $216 million for ECSE for fiscal year 2022 and the administration now requests an increase to $277 million, the peak of its projected funding profile. Meanwhile, the U1a project budget ramped down from $161 million to $135 million and the administration requests $53 million for fiscal year 2023, though it anticipates seeking $130 million the following year.

NNSA reports that its high-end cost estimate for the ASD project has increased 37% to $1.28 billion due to “COVID delays and supply-chain challenges.” The cost estimate for the U1a project has also increased 10% to $576 million due to design changes and supply-chain disruptions. NNSA now anticipates both projects will be completed in fiscal year 2027.

Radiation effects facility. The administration requests $33 million for conceptual design of a facility called Combined Radiation Environments for Survivability Testing (CREST), which will enable study of how nuclear weapons will function under a variety of stresses such as electromagnetic pulses and neutron radiation. NNSA anticipates CREST’s total cost will be $2.1 billion.

In justifying the facility, NNSA notes that legacy analyses of warhead survivability have “generally been performed by separating and addressing individual effects, one at a time.” It adds that “data generated with combined survivability assessments can be utilized to improve understanding of integrated weapon response, electrical response, and terminal flight dynamics of U.S. warheads after a hostile or fratricide engagement.”

Stockpile Responsiveness Program. The recently created Stockpile Responsiveness Program provides nuclear weapons scientists and engineers with opportunities to exercise a greater range of skills than those afforded through stockpile stewardship, which focuses on maintenance of warheads rather than design and production. House and Senate appropriators both initially proposed to slash its budget from $70 million to $10 million for fiscal year 2022, but ultimately provided $50 million. Although Congress did not explain the cut, appropriators previously have pressed NNSA for more details about the program’s activities.

For fiscal year 2023, the administration seeks to restore the program’s budget to $69 million. Elaborating on its aims, NNSA states the program’s highest priority is to “examine alternative approaches to design, manufacturing, certification, and qualification to accelerate the timeline for the nuclear weapons lifecycle and reduce costs.” It adds that a “small, but important” part of the program is to “analyze the consequences of emerging threats [and] to project technology trends.” Additional elements of the program include non-nuclear flight tests that provide junior staff with “experience in the process of turning ideas into a working system,” as well as initiatives to study “challenge problems,” which to date have included “strategic deep underground target defeat and defended target defeat.”

Academic programs. Congress increased NNSA’s Academic Programs budget by $10 million to $112 million for fiscal year 2022, with the additional funds split evenly between programs that support partnerships with Tribal and minority-serving educational institutions. For fiscal year 2023, the administration requests level funding of $40 million for the minority-serving institution partnership program and $5 million for the Tribal institution partnership program, which would undo the increase just provided. It also proposes to pare back the budget for the Stewardship Science Academic Alliance from $31 million to $24 million, also undoing a recent increase provided by Congress that NNSA intends to allocate over a two-year period. 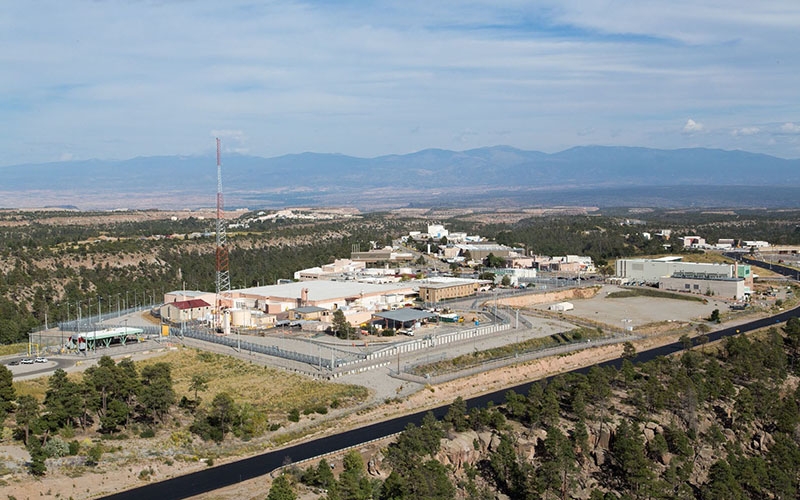 NNSA has embarked on a decade-long effort to reconstitute capabilities for producing the plutonium cores for nuclear weapons, known as “pits,” primarily to hedge against the potential that pits in the current stockpile may eventually become unreliable due to aging. Congress increased overall funding for this effort by nearly 20% to $1.9 billion for fiscal year 2022, and the administration now seeks a further 26% increase to $2.4 billion, split between Los Alamos National Lab in New Mexico and the Savannah River Site in South Carolina. (These figures reflect a budget restructuring proposed in the fiscal year 2023 request.)

Although Congress has directed NNSA to produce 80 pits per year by 2030, the agency recently disclosed it will be unable to meet that target. While Los Alamos is on track to produce its share of the goal, NNSA now estimates the Savanah River Site may miss its target by several years.

NNSA Administrator Jill Hruby sought to temper concerns about the delay at an April 27 hearing on the budget request, remarking, “Our pits are not today at any kind of an aging cliff. We can reuse pits. We just don't like that plan because we may have to take them out before the end of the life of the weapon system.” She also noted the ECSE program is important to helping NNSA understand pit longevity. “If we believe that we can get an excellent estimate of pit lifetime, it allows us all kinds of options going forward and we don't have to use a hedge strategy of making sure we can make pits while we study aging,” she explained.

While Congress so far has strongly supported the plutonium modernization effort, lawmakers have expressed wariness about the strain it places on other parts of NNSA’s portfolio. For instance, House appropriators registered concern that pit production has contributed to “significant downward pressure on other critical activities within Defense Programs, including science and infrastructure,” and argued that the current funding strategy is “not sustainable.”

Nonproliferation R&D. Congress increased funding for the Defense Nuclear Nonproliferation R&D program by 14% to $729 million for fiscal year 2022. About half the increase is allocated to the recently created Nonproliferation Stewardship Program, which aims to foster the foundational technical capabilities and workforce needed to address emerging proliferation threats. Most of the remainder is split between programs to detect nuclear detonations and proliferation. Congress also provided flat funding of $20 million for a program that is exploring alternatives to powering naval vessels with highly enriched uranium (HEU), which successive administrations have proposed to terminate. The U.S. Navy and DOE have argued that a low-enriched uranium (LEU) fuel would be impractical and costly.

For fiscal year 2013, the administration proposes a 1% overall cut to nonproliferation R&D, though a renewed proposal to zero out of the LEU fuel program makes room for some increases elsewhere in the request. Priority activities include developing satellite-based payloads for detecting nuclear detonations, establishing a testbed for detecting “low yield and evasively conducted underground nuclear explosions,” and working to better discriminate underground nuclear explosions from natural earthquakes. NNSA also plans to construct a Uranium Sciences and Technology Center and develop a computational model that can “predict the output of an entire uranium enrichment system based on the specific design of a single machine.”

Arms control. Congress increased funding for NNSA’s Nonproliferation and Arms Control program by 25% to $185 million for fiscal year 2022, and the administration now seeks a further 12% increase. Planned activities include development of an “arms control user facility” and an initiative to accelerate the development of new monitoring and verification methods for arms control treaties.

Biosecurity. The administration requests $20 million for NNSA and the Office of Science to launch a Bioassurance Program that would “broaden DOE’s role in national biodefense.” One thrust of the program is “anticipating destabilizing biological threats, both naturally occurring and anthropogenic, and avoiding technical surprise through predictive modeling and data science.” It would also develop threat mitigation measures and safeguards analogous to those NNSA maintains for nuclear weapons.

Mo-99. Congress has wound down a program that paid companies to develop HEU-free domestic sources of the medical radioisotope molybdenum-99, which is a key precursor to an isotope used in imaging procedures. NNSA anticipates that previously appropriated funds will be sufficient for continuing activities and that at least two companies will be able to produce Mo-99 in the U.S. by the end of 2023. The agency also expects that the last major global producer of Mo-99 will convert to an LEU-based process in 2022.