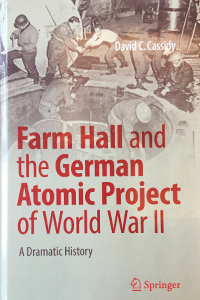 It's July 1945. Germany is in defeat and the Manhattan Project’s atomic bombs are on their way to Japan. Under the direction of physicist Samuel Goudsmit, the Allies are holding some of the top German nuclear scientists — among them Werner Heisenberg, Otto Hahn, and Walter Gerlach — captive in Farm Hall, an English country manor near Cambridge, England. As secret microphones record their conversations, the scientists are unaware of why they are being held or for how long. Thinking themselves far ahead of the Allies, how will they react to the news of the atomic bombing of Hiroshima and Nagasaki? How will these famous scientists explain to themselves and to the world their failure to achieve even a chain reaction? How will they come to terms with the horror of the Third Reich, their work for such a regime, and their behavior during that period? This one-act play is based upon the transcripts of their conversations as well as the author's historical work on the subject. An audience discussion with the playwright, David Cassidy, will follow the staged reading.

This event is brought to you by the American Institute of Physics (AIP), as part of the Lyne Starling Trimble Science Heritage Public Lecture Series.

Dr. David Cassidy, Professor Emeritus, Hofstra University, author of Farm Hall and the German Atomic Project of World War II (Springer, 2017), will be available for book signing from 6:00 to 6:45 pm and after the performance. A signed copy of the book will be provided as a thank you for a donation of $30 or more to the Physics Heritage and Promise Campaign of the American Institute of Physics.