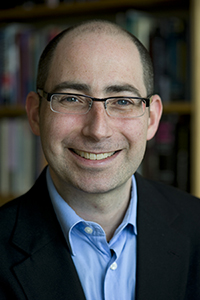 A popular image persists of Albert Einstein as a loner, someone who avoided the hustle and bustle of everyday life in favor of quiet contemplation. Yet Einstein was deeply engaged with politics throughout his life; indeed, he was so active politically that the U.S. government kept him under surveillance for decades, compiling a 2000-page secret file on his political activities. His most enduring scientific legacy, the general theory of relativity -- physicists' reigning explanation for gravity and the basis for nearly all our thinking about the cosmos -- has likewise been cast as an austere temple standing aloof from the all-too-human dramas of political history. But was it so? This lecture examines ways in which research on general relativity was embedded in, and at times engulfed by, the tumult of world politics over the course of the twentieth century.

David Kaiser is Germeshausen Professor of the History of Science and Department Head of MIT's Program in Science, Technology, and Society, and also a member of MIT's Department of Physics. His books include Drawing Theories Apart: The Dispersion of Feynman Diagrams in Postwar Physics (2005), which received the Pfizer Prize from the History of Science Society for best book in the field; and How the Hippies Saved Physics: Science, Counterculture, and the Quantum Revival (2011), which was named "Book of the Year" by Physics World magazine and also received the Davis Prize from the History of Science Society for best book aimed at a general audience. A Fellow of the American Physical Society, Kaiser has received MIT's highest awards for excellence in teaching. His work has been featured in Science, Nature, the New York Times, Scientific American, the London Review of Books, and the Huffington Post, as well as on NOVA television programs, NPR, and the BBC. He is currently writing two books about gravity: a physics textbook with his colleague Alan Guth on gravitation and cosmology, and a history of research on general relativity over the twentieth century.