Lyne Starling Trimble Public Lecture: The Greatest Myth in the History of Astronomy 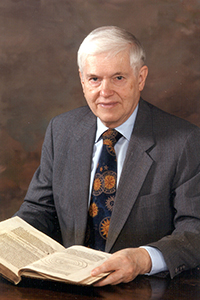 The Greatest Myth in the History of Astronomy

As astronomy grew more sophisticated in the Middle Ages, and as observations grew more accurate, astronomers added more and more epicycles to patch up the tottering ancient Ptolemaic theory.  Fortunately Copernicus arrived in the nick of time to prevent total collapse of planetary astronomy.  Professor Gingerich, an astrophysicist turned historian, will review the detective work required to demolish this popular long-standing mythology.

Owen Gingerich is Professor emeritus of Astronomy and History of Science at the Harvard-Smithsonian Center for Astrophysics. He is known for his 30-year search for original copies of Copernicus' earth-shaking treatise, an adventure described in his The Book Nobody Read. He has written hundreds of research papers, popular articles, and reviews, and his books include God's Universe and God's Planet.