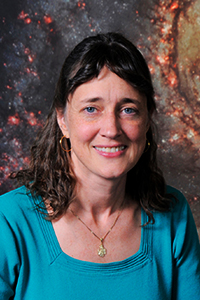 The Hubble Space Telescope: 30 Years of Discovery and Awe

The Hubble Space Telescope is at the peak of its scientific return, even thirty years after its launch into Earth’s orbit from the space shuttle.  Five astronaut servicing missions and phenomenal teams of experts on the ground have kept this facility at the frontier of cosmic discoveries.  In honor of this milestone anniversary, I will present the highlights of Hubble’s incredible historical achievements, which include images of star-studded beautiful nebulae, detections of black holes, and measurements of the universe’s expansion.  Hubble is now investigating phenomena never originally planned for its mission, including dark energy, dark matter, and the atmospheric composition of exoplanets.  I will also show the latest Hubble discoveries and the incredible exploratory power of Hubble being used in complement with other probes, telescopes, and future missions.

Dr. Jennifer Wiseman is an astrophysicist at the NASA Goddard Space Flight Center, where she serves as the Senior Project Scientist for the Hubble Space Telescope mission.  She previously headed Goddard’s Laboratory for Exoplanets and Stellar Astrophysics, and studies the formation of stars in dense interstellar clouds.  Dr. Wiseman is also interested in science policy and public science outreach and engagement.  She served as a Congressional Science Fellow of the American Physical Society, an elected Councilor of the American Astronomical Society, and a public dialogue leader for the American Association for the Advancement of Science.  She enjoys giving talks on the excitement of astronomy and scientific discovery, and has appeared in many science and news venues including the New York Times, the Washington Post, the BBC, NOVA, and National Public Radio.