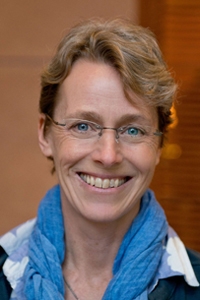 In four decades, the Hanford plant near Richland and the Maiak plant near Ozersk each issued at least 200 million curies of radioactive isotopes into the surrounding environment contaminating rivers, fields, forests, and food supplies. Because of the decades of secrecy, downwind and downriver neighbors of the plutonium plants had difficulty proving what they suspected, that the rash of illnesses, cancers, and birth defects in their communities were caused by the plants’ radioactive emissions. Both nuclear power plants spawned limited-access, child-centered, well-subsidized communities for working class plant operators. These ‘plutopias’ were successful because in their zoned-off isolation they appeared to deliver the promises of the American dream and Soviet communism; in reality, they concealed disasters that remain highly unstable and threatening today.

Kate Brown lives in Washington, DC and is Professor of History at UMBC.  Brown is the author of Plutopia: Nuclear Families in Atomic Cities and the Great Soviet and American Plutonium Disasters (Oxford 2013), which won seven prizes including the American Historical Association’s John H. Dunning and the Albert J. Beveridge prizes, the George Perkins Marsh Prize from the American Society for Environmental History and the Ellis W. Hawley Prize from the Organization of American Historians.  She is a 2009 Guggenheim Fellow, and has been awarded grants from the National Endowment for the Humanities, the American Council of Learned Societies, the Social Science Research Council, the National Council for East European and Eurasian Research, the International Research and Exchange Board, the Eurasia Foundation, Harvard University’s Davis Center, and the Kennan Institute in Washington, DC. Brown’s most recent book Dispatches from Dystopia: History of Places Not Yet Forgotten was published in 2015 with the University of Chicago Press. She is currently writing a history of the communities circling the Chernobyl Zone.