Lyne Starling Trimble Public Lecture: The Science of Optics; The History of Art 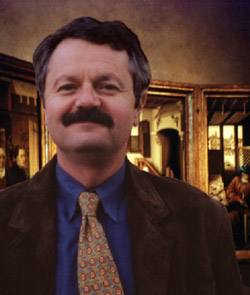 The Science of Optics; The History of Art

Given by Charles M. Falco

The space for this event full; online RSVP has closed.

In January Falco presented brief highlights of his research at the opening ceremonies of the International Year of Light in Paris, France. In his lecture on March 26th, we will have the opportunity to hear more about his work and how it sheds light on the development of masterpieces that grace the walls of our finest museums. Talent, resourcefulness, or fraud—whatever the combination, its forever part of art history.

Abstract: Recently, renowned artist David Hockney observed that certain drawings and paintings from as early as the Renaissance seemed almost "photographic" in detail.  Following an extensive visual investigation of western art of the past 1000 years, he made the revolutionary claim that artists even of the prominence of van Eyck and Bellini must have used optical aids.  However, many art historians insisted there was no supporting evidence for such a remarkable assertion.  In this talk I show a wealth of optical evidence for his claim that Hockney and I subsequently discovered during an unusual, and remarkably productive, collaboration between an artist and a scientist.  I also discuss the imaging properties of the "mirror lens" (concave mirror), and some of the implications this work has for the history of science as well as the history of art (and the modern fields of machine vision and computerized image analysis).  These discoveries convincingly demonstrate optical instruments were in use — by artists, not scientists — nearly 200 years earlier than commonly thought possible, and account for the remarkable transformation in the reality of portraits that occurred early in the 15th century. (for more information see http://fp.optics.arizona.edu/ssd/art-optics/index.html)

Acknowledgments:  This work was done in collaboration with David Hockney.  We gratefully acknowledge David Graves (London), Ultan Guilfoyle (Guggenheim), Martin Kemp (Oxford U.), Masud Mansuripur (U. Arizona), José Sasián (U. Arizona), Richard Schmidt (Los Angeles), and Lawrence Weschler (The New Yorker) for a variety of valuable contributions to our efforts.

Professor Charles Falco has joint appointments in Optical Sciences and Physics at the University of Arizona where he holds the UA Chair of Condensed Matter Physics.  He is a Fellow of four professional societies (the American Physical Society, the Institute of Electrical and Electronics Engineers (IEEE), the Optical Society of America, and the Society of Photo-optical Instrumentation Engineers (SPIE)), has published more than 250 scientific manuscripts, co-edited two books, has seven U.S. patents, and given over 400 invited talks at conferences, research institutions, and cultural organizations in 32 countries.  However, in addition to his scientific research, he was co-curator of the Solomon R. Guggenheim museum's "The Art of the Motorcycle" which, with over 2 million visitors in New York, Chicago, Bilbao, and the Guggenheim Las Vegas, was by far the most successful exhibition of industrial design ever assembled.  More recently, he and the world-renowned artist David Hockney found artists of such repute as van Eyck, Bellini and Caravaggio used optical projections in creating portions of their work.  Three international conferences have been organized around these discoveries, and recognition for them includes the 2008 Ziegfield Lecture Award from the National Art Education Association.

All employees of ACP as well as the general public are welcome.

The space for this event full.