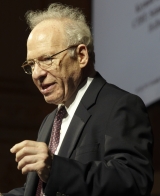 The interview focuses on Archambeau's geophysical training at the California Institute of Technology and his career as a seismologist, covering the period before 1970. Major emphasis lies on his involvement in issues related to the seismic detection of underground nuclear explosions and his advocacy for a nuclear test ban treaty. He discusses the Department of Defense's "Project Vela Uniform," which aimed at improving seismic detection capabilities, and he describes Vela's impact on his career on seismology in general.

Interview focuses on Frosch's involvement in issues related to seismic detection of underground nuclear weapons test during the 1960s. He also describes his time as director of the Advanced Research Projects Agency's Nuclear Test Detection Office from 1963 to 1965. In this position Frosch helped to manage the Department of Defense's "Project Vela Uniform," which aimed at the improvement of seismic detection capabilites. He played a major role in the realization of the Large Aperture Seismic Array (LASA).

In 1965 Evernden, a Berkeley-trained seismologist, became involved in the scientific-technical-political debate about the seismic detection of underground nuclear weapons tests. From 1965 to 1969 Evernden worked inside the Department of Defense as a sesimologist expert, first for the secret Air Force Technical Applications Center, later for the Advanced Research Projects Agency. He soon became convinced that only a few seismologists were actively working towards a solution of the detection problem, and that a number of individuals tried to prevent such as solution to the test ban treaty issue. Since then he has been an outspoken supporter of a Comprehensive Test Ban Treaty and critic of the Department of Defense's work on seismic detection. 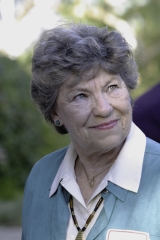 In this interview, David Zierler, Oral Historian for AIP, interviews Mary Elizabeth (MaryBeth) Beerbohm, longtime secretary to Pief Panofsky at SLAC. Beerbohm recounts her childhood in northern Minnesota and she explains how her training in shorthand during high school helped her get a job at SLAC. She describes the origins of “Project M,” and she discusses Panofsky’s daily schedule, his work style, and his management techniques. Beerbohm describes how Panofsky made SLAC feel like a family atmosphere, and as a “good Democrat,” Beerbohm humorously wonders what Panosfky would have thought of Trump. She relates Panofsky’s ideas about nuclear weapons and the Cold War and that his commitment to the Lab remained strong throughout his retirement. At the end of the interview, Beerbohm reflects on her long career at SLAC, and she credits Panofsky for making it both an exciting and meaningful place to work. 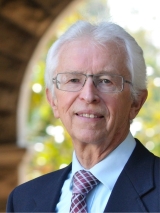 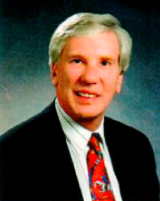