Mildred Allen was born in Massachusetts in 1894, the elder of two daughters of an MIT professor of civil engineering who had met her mother while working in New Mexico. She graduated from Vassar College in 1916 with training in mathematics and physics. Her Ph.D. in physics (1922) was granted by Clark University where she studied with A. G. Webster, but her thesis research was one at MIT. She taught at Mt. Holyoke, Wellesley and Oberlin Colleges during the 1920s and early 30s, as well as studying further at the University of Chicago and Yale. She did research at the Bartol Foundation, 1927-30, and at Harvard University, 1931-33. She then taught at Mt. Holyoke from 1933 until her retirement in 1959. Since then she has done additional research, most recently (paper published 1971) on the behavior of torsion pendulums especially during solar eclipses. 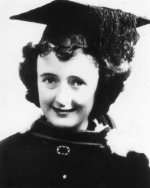