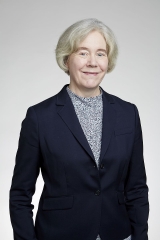 Interview with Ellen D. Williams, Director of the Earth System Science Interdisciplinary Center and Distinguished University Professor at the University of Maryland. Williams recounts her childhood in Michigan, and the benefits that she enjoyed growing up during the height of the U.S. car manufacturing era. She discusses her undergraduate education at Michigan State where she developed an interest in physical chemistry and become involved in women’s rights issues. Williams explains her decision to attend Caltech for graduate school, where she conducted thesis research on the statistical mechanics of surfaces using electron diffraction. She describes the opportunities leading to her appointment in physics and astronomy at Maryland, and she explains the transition from chemistry to a physics department, which was smoothed by the fact that her research focused on phase transitions and critical phenomena. Williams describes achieving tenure and her work within the Institute for Physical Science and Technology. She explains her research in scanning tunneling microscopes and nanotechnologies, and her increasing fluency in working with government funding agencies. Williams explains her decision to join BP as chief scientist where she was involved in fostering BP’s commitment to sustainability, and she describes Ernest Moniz’s offer for her to direct ARPA-E at DOE during the second term of the Obama administration. She conveys her enjoyment working in such a focused manner on clean energy in this role and her contributions to the Paris Climate Accord. Williams describes returning to Maryland and explains the most efficacious way of teaching students about both the science and policy implications of climate change. At the end of the interview, Williams discusses her work as director of the Earth Systems Science Interdisciplinary Center and the ongoing governmental collaborations this position allows, and she offers optimism that we have both the technological and political tools to mitigate climate change effectively.