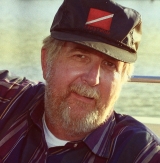 In this interview, David Zierler, Oral Historian for AIP, interviews Ralph Nelson, a radiation physicist at SLAC who retired just shy of forty years of service. He explains Panofsky’s original decision for Nelson to split his time doing physics and helping to create the radiation protection group, for which he did shielding calculations to ensure safety both to SLAC employees and to the surrounding community. He describes his research in accelerator health physics, and he recounts his education at Berkeley and his research as a nuclear emulsion scanner at Lawrence Berkeley Laboratory. Nelson describes the scene at SLAC when he arrived in 1964, and he describes the arrangement by which he would pursue a Ph.D. in muon physics as an inter-departmental student in nuclear engineering, radiology, and physics, while retaining his employment. He explains the complex challenges associated with identifying the most dangerous areas in the lab in order to develop and deploy shielding. Nelson describes his advisory work for the site selection committee for the SSC, and he describes how he needed to tailor his safety objectives relative to different research endeavors over the years. At the end of the interview, Nelson reflects on Panofsky’s overarching vision for SLAC, and how his concern over radiation exposure was paramount in all of his considerations.