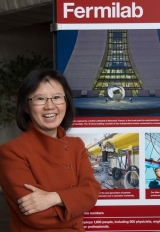 Interview with Young-Kee Kim, Louis Block Distinguished Professor of Physics, Chair of the Department of Physics, and Senior Advisor to the Provost for Global Scientific Initiatives at the University of Chicago. She explains her advisory role to the Provost and she surveys the many challenges associated with remote work during the pandemic. Kim recounts her childhood in South Korea, her early interests in math, and her plans in college to pursue a career in theoretical physics. She describes the opportunities that allowed her to come to the United States to pursue thesis research at the University of Rochester to work with Steve Olsen on the AMY experiment and to test QCD via properties of quarks and gluons. Kim describes her postdoctoral work at Berkeley Lab on the CDF experiment at Fermilab, and she explains her decision to join the faculty at UC Berkeley as she was becoming more involved in ATLAS at CERN. She describes the shutdown of the Tevatron and her appointment as Deputy Director of Fermilab, and she explains her decision to move to the University of Chicago. Kim describes the broader view she gained of the DOE in her leadership role at Fermilab and she surveys the reverberating discoveries that occurred as a result of finding the Higgs at the LHC. She explains why electromagnetism is her favorite course to teach and she reflects on the physics community’s recent push to emphasize the importance of diversity and inclusivity. At the end of the interview, Kim conveys the value of taking a global approach to the biggest questions in science and she explains why she remains focused on the Higgs boson, which she believes could offer a pathway to the discovery of new physics.