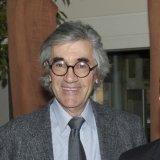 In this interview, David Zierler, Oral Historian for AIP, interviews Gino Segrè, emeritus professor of physics and astronomy at the University of Pennsylvania. Segrè recounts his childhood in Italy and his family’s abrupt exit for the United State before the outbreak of World War II. He discusses his life in New York, and his family’s decision move back and forth from Italy. Segrè discusses his undergraduate experience at Harvard and his graduate research at MIT. He discusses his work on field theory at Berkeley, and his decision to join the faculty at Penn where he set about helping to build up the elementary particle physics program. Toward the end of the interview, Segrè discusses his developing interests as a science writer, the present course of theoretical particle physics and the importance for physicists to reinvent themselves over the course of their careers.