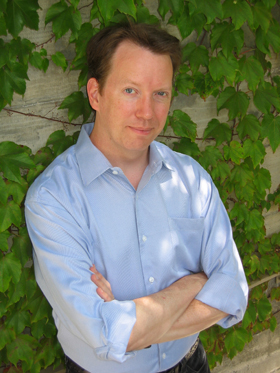 WASHINGTON D.C., July 24, 2014 – The American Institute of Physics (AIP) today announced that Sean Carroll, a physicist at the California Institute of Technology, is the winner of the 2014 Andrew Gemant Award, an annual prize recognizing significant contributions to the cultural, artistic or humanistic dimension of physics.

In recognizing Carroll, the AIP prize committee cited him “for extraordinary public outreach on particle physics and cosmology, as an educator, author, public lecturer, and consultant for TV and radio programs, and for his pioneering work communicating with a variety of international audiences using social networking.”

“Few people can make complicated topics like the nature of space and time as accessible as Sean Carroll does,” said Catherine O'Riordan, AIP vice president of Physics Resources. “He doesn't just inspire the public’s scientific imagination -- he provides the tools for his readers and viewers to answer some of life’s biggest, most fundamental questions themselves.”

Carroll (on Twitter: @seanmcarroll) followed his own curiosity to a career in theoretical physics and cosmology, focusing especially on the origin and constituents of the universe. He received his Ph.D. in 1993 from Harvard University, and has worked at MIT, the Institute for Theoretical Physics at UC Santa Barbara and the University of Chicago.  He has made significant contributions to models of interactions between dark matter, dark energy, and ordinary matter; alternative theories of gravity; violations of fundamental symmetries; and the theory of time.

Throughout his career, Carroll has engaged the public by providing entertaining commentary and analysis on the rapid pace of science through his books, TV appearances and active social media engagement. He has appeared on television shows such as “The Colbert Report,” PBS's “NOVA” and “Through the Wormhole” with Morgan Freeman, has written popular science books on the arrow of time and the Higgs boson, and regularly blogs at his site Preposterous Universe.

“Science isn't a separate kind of human endeavor, utterly different from other things that we do,” said Carroll. “It's part of what makes us human, a natural outcome of our intrinsic curiosity and urge to better understand the world.”

Carroll will receive the Gemant award on Monday, January 5, 2015 at the Reuben H. Fleet Science Center in in San Diego's Balboa Park (www.rhfleet.org), where he will also deliver a public lecture.

The annual award consists of $5,000 cash to the winner and a grant of $3,000 to further the public communication of physics at an academic institution the winner chooses. Carroll has named as recipient of the grant The Story Collider, a nonprofit based in New York City, which is devoted to publicizing stories about science.

The proliferation of information, both good and bad, on the internet in the last couple decades has made fierce the competition for the public's attention to any subject matter, and promoting science can be especially difficult, Carroll said. Many people struggle to learn science in school and become defensive about not understanding it for the rest of their lives, he added, which is one of the things that informs his approach to public engagement.

"We need to focus on why science is fun and amazing, and especially on the special methodology of how science works, rather than thinking of it as a dull collection of facts,” said Carroll. “Most people can get through the day without thinking much about science, but when they are given the opportunity, they are eager to learn and understand.”

Sean Carroll is a physicist at the California Institute of Technology.  Raised in Yardley, Pennsylvania, he received his Ph.D. in 1993 from Harvard University, and has worked at MIT, the Institute for Theoretical Physics at UC Santa Barbara, and the University of Chicago.  His research focuses on theoretical physics and cosmology, especially the origin and constituents of the universe. He has contributed to models of interactions between dark matter, dark energy, and ordinary matter; alternative theories of gravity; violations of fundamental symmetries; and the arrow of time.  Carroll is the author of "The Particle at the End of the Universe," "From Eternity to Here: The Quest for the Ultimate Theory of Time," and the textbook "Spacetime and Geometry: An Introduction to General Relativity." He has been awarded fellowships by the Sloan Foundation, Packard Foundation, and the American Physical Society. He frequently consults for film and television, and has been featured on television shows such as “The Colbert Report”, PBS's “Nova” and “Through the Wormhole” with Morgan Freeman.

The American Institute of Physics is an organization of physical science societies, representing scientists, engineers and educators. Through its Physics Resources Center, AIP delivers valuable services and expertise in education and student programs, science communications, government relations, career services for science and engineering professionals, statistical research in physics employment and education, industrial outreach, and the history of physics and allied fields. AIP publishes Physics Today, the most influential and closely followed magazine of the physics community, and is also home to Society of Physics Students and the Niels Bohr Library and Archives. AIP owns AIP Publishing LLC, a scholarly publisher in the physical and related sciences. http://www.aip.org