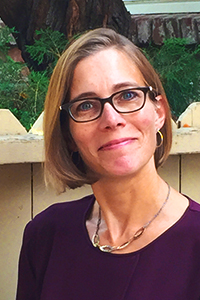 WASHINGTON, May 5, 2020 -- The American Institute of Physics, celebrating the 30th anniversary of the launch of the NASA/ESA Hubble Space Telescope, is delighted to host a virtual presentation by Stanford University’s Elizabeth Kessler in an upcoming Lyne Starling Trimble Science Heritage Public Lecture.

The lecture series is presented by AIP and features science historians and writers who study the role of science and technology in modern society and culture. "Hubble Space Telescope Images and the Astronomical Sublime" will be hosted virtually, Thursday, May 7 at 3:30 p.m. Eastern (U.S.). Interested viewers can register for the lecture here.

Kessler’s research focus is on 20th and 21st century American visual culture. The aesthetics of Hubble images are reminiscent of paintings and photographs of this era, and their ubiquity inspired Kessler’s curiosity about how astronomers made choices regarding the images’ color, contrast and composition.

“The Hubble images reminded me of 19th century landscape paintings, and I wondered whether astronomers who crafted the Hubble images through digital image processing might have that tradition in mind,” she said.

Launched April 24, 1990, the Hubble Space Telescope was designed to give scientists the opportunity to observe the universe and its mysteries with new clarity. Its long lifespan has led to the production of images that are admired for not only their scientific value, but also their visual beauty.

“In many ways, the Hubble images have helped to define how we picture the universe,” Kessler said, referring to its vividly colored nebulae and glittering galaxies. “They have influenced the appearance of images produced by astronomers using high-power telescopes and those produced by amateur astronomers. Science fiction films send us flying through scenes based on Hubble images.”

Since its deployment, Hubble has measured the expansion rate of the universe, taken pictures of light bent by dark matter and found evidence of black holes at the centers of galaxies. Its data has been used to write over 17,000 peer-reviewed scientific papers, and its memorable photos show images of the universe as it was billions of years ago.

Physics Today, a publication by AIP, highlighted the anniversary in its April issue with a look back at the history of the telescope and an analysis of Hubble’s discoveries over the past 30 years. A centerfold in the print edition pinpoints the locations of Hubble’s observations on a map of the sky, and print and online articles chronicle the telescope’s great discoveries.

Kessler noted Hubble’s anniversary is an opportunity to reflect on both its scientific and technological accomplishments, and also on how profoundly it has affected our visions of the cosmos.

“Its images have contributed to and shaped American scientific and visual culture for a generation,” said Kessler.

Funding for the Trimble lectures is endowed by Virginia Trimble, an accomplished astronomer and advocate of the history of physics to students, colleagues and the general public, and named for her late father, Lyne Starling Trimble, who was an innovative chemist and held patents for a number of color-reproduction systems.

“Hubble Space Telescope Images and the Astronomical Sublime,” by Elizabeth A. Kessler, will be hosted virtually Thursday, May 7, 2020. Register for the lecture here. More information about the Lyne Starling Trimble Science Heritage Public Lecture Series can be found at https://www.aip.org/history-programs/physics-history/trimble-lectures.

The American Institute of Physics (AIP) is a 501(c)(3) membership corporation of scientific societies. AIP pursues its mission—to advance, promote, and serve the physical sciences for the benefit of humanity—with a unifying voice of strength from diversity. In its role as a federation, AIP advances the success of its Member Societies by providing the means to pool, coordinate, and leverage their diverse expertise and contributions in pursuit of a shared goal of advancing the physical sciences in the research enterprise, in the economy, in education, and in society. In its role as an institute, AIP operates as a center of excellence using policy analysis, social science, and historical research to promote future progress in the physical sciences. See https://www.aip.org/.