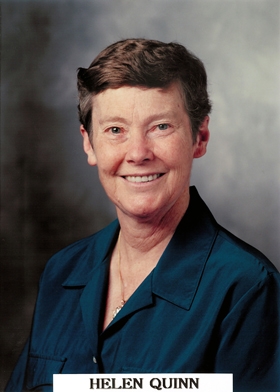 WASHINGTON, D.C., November 17, 2015 -- The American Institute of Physics (AIP) announced today that Helen R. Quinn, a Professor Emerita of SLAC National Accelerator Laboratory and a pioneer in science education, is the winner of AIP's 2016 Karl Taylor Compton Medal for Leadership in Physics.

Named after prominent physicist Karl Taylor Compton, the medal is given by AIP every four years to highly distinguished physicists like Quinn who have made outstanding contributions through exceptional statesmanship in science.

In naming Quinn, the selection committee cited her “for her leadership in promoting K-12 education and outreach, including the development of standards and approaches to science education that have had an enormous influence at the local, state, national and international levels, and for her broad and deep contributions to the advancement of theoretical particle physics.”

"Through her outstanding contributions in the search for a unified theory for interactions, Dr. Quinn has inspired and influenced many scientists in the field of particle physics," added AIP CEO Robert G.W. Brown. "And she is touching the lives of millions of children in the United States now and in the future through her tireless work on science education standards."

"Quinn helped to develop the California State Science Standards and has played a major role on the national level by helping to develop and working towards the widespread adoption of the Next Generation Science Standards in many different states and in the District of Columbia," Brown said.

In 2016, Quinn will receive the Compton Medal, a certificate of recognition and a check for $10,000.

Helen R. Quinn was born in Melbourne, Australia and received her B.S., M.S., and Ph.D. degrees in physics from Stanford University in Palo Alto, Calif. She worked as a postdoctoral researcher at the German Synchrotron Laboratory in Hamburg, Germany, then spent several years at Harvard University before returning to California in 1977 to work at SLAC National Accelerator Laboratory at Stanford.

Over a long and distinguished career, Quinn made many major contributions to the field of theoretical particle physics and is regarded as a leader in the physics community. She served as President of the American Physical Society in 2004.

Together with Stephen Weinberg and Howard Georgi she explained how the very different coupling strengths of weak, electromagnetic and strong interactions can be seen to unify to a single common strength at a very high energy scale, thus allowing a unified view of all these interactions. Together with Roberto Peccei she developed a proposed solution to the "strong CP problem" of the Standard Model, which led to the postulation of a particle called the axion that's now considered a leading candidate for the particle of dark matter. Quinn was also one of the leaders of theoretical developments related to the analysis of CP violation in B meson decays. Her work played an important role in the development of the BABAR collaboration at SLAC, which eventually confirmed the Kobayashi-Maskawa theory as the origin of CP and T violation in quark decays. The Nobel Prize in physics was awarded to the architects of that theory in 2008.

Quinn’s distinguished contributions to theoretical particle physics have been recognized with the Dirac Medal from the International Centre for Theoretical Physics in Trieste, Italy, the Klein Medal from the University of Stockholm and the Swedish National Academy of Sciences, and the J. J. Sakurai Prize for Theoretical Particle Physics from the American Physical Society. She is a member of the National Academy of Sciences and the American Philosophical Society.

Quinn’s engagement in science education began in the late 1980s when she was a staff scientist at SLAC. She led the laboratory’s education outreach programs, including an undergraduate summer research internship program that brought students from across the country to SLAC, particularly those from groups underrepresented in the physical sciences. She also developed summer workshop programs for high school physics and chemistry teachers, worked with teams from national laboratories in a collaborative project to support and improve science education in the Oakland School District, and lead the development of the SLAC visitor center and the online Virtual Visitor Center.

Quinn was a founding director of the Contemporary Physics Education Project (CPEP), a small non-profit created to develop and distribute large posters and related materials outlining major areas of physics for high school and college classroom walls. She also served as a volunteer member of the team that worked to support the development of the California State Science Standards, which the state adopted in 1997.

In 2005 Quinn joined the National Research Council (NRC) Board on Science Education and was its chair from 2009-2014. She planned and led the work of the NRC study committee that produced the report “A Framework for K-12 Science Education.” This document provided the basis of the Next Generation Science Standards (NGSS), which have so far been adopted by more than a dozen states and the District of Columbia. In addition to these standards, the report has had a broad influence on science education thinking, both nationally and internationally.

Quinn also served as co-chair of the California Framework and Curriculum Committee for Science, a critical advisory committee to the California Department of Education in preparing a document to guide implementation of the NGSS, which have been formally adopted as the science standards for California.

ABOUT THE COMPTON MEDAL

The Karl Taylor Compton Medal for Leadership in Physics was established by the American Institute of Physics in 1957 to recognize distinguished physicists who have made outstanding contributions to physics through outstanding statesmanship in science. The award is named for Karl Taylor Compton in honor of his service to the physics community. Intended primarily for U.S. physicists, the award is given every four years and consists of a medal, a certificate and a cash award of $10,000. The award is supported by a restricted/endowed fund.

The American Institute of Physics is an organization of scientific societies in the physical sciences, representing scientists, engineers, and educators. AIP offers information, services, and expertise in physics education and student programs, science communication, government relations, career services for science and engineering professionals, statistical research in physics employment and education, industrial outreach, and the history of physics and allied fields. AIP publishes the flagship magazine, Physics Today, and is home to the Society of Physics Students and the Niels Bohr Library and Archives. AIP owns AIP Publishing LLC, a scholarly publisher in the physical and related sciences. See: http://www.aip.org