Nominations now closed. Nominations for the 2022 Compton Medal will open on June 1, 2021.

Nominations are to be submitted in pdf format via email; include ALL information/attachments in one email:

Self-nominations are permitted, and we encourage nominations of women, members of underrepresented minority groups, and scientists from outside the United States.

The Karl Taylor Compton Medal recognizes distinguished physicists for outstanding statemanship in science. The award established in 1957 by the American Institute of Physics (AIP) in honor of Karl Taylor Compton, first chairman and one of the principal founders of AIP, for his tireless work as a combination scientist-statesman and statesman-scientist. Intended primarily for U.S. physicists, the award is now given every two years, or when it appears appropriate. It consists of a medal, a certificate, and a cash award of $10,000. The award is supported by a restricted/endowed fund. 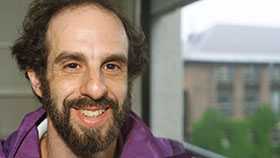 Paul Ginsparg is the 2020 recipient of the Karl T. Compton Medal for Leadership in Physics “for his paradigm-changing contributions to physics information sharing by inventing, developing and managing the arXiv system for electronic distribution of pre-publication (or preprint) papers. This system provides equitable world-wide access to the forefront of physics research activity, both pre- and post-publication in refereed journal, and has since been emulated by a number of other scientific fields."