Best of Both Worlds

WASHINGTON, D.C., May 9, 2016 – More, faster, better, cheaper. These are the demands of our device-happy and data-centered world. Meeting these demands requires technologies for processing and storing information. Now, a significant obstacle to the development of next-generation device technologies appears to have been overcome, according to researchers from the University of Tokyo (Japan), Tokyo Institute of Technology (Japan) and Ho Chi Minh University of Pedagogy (Vietnam).

“Bridging semiconductor and magnetism is desirable because it would provide new opportunities of utilizing spin degrees of freedom in semiconductor devices,” explained research leader Masaaki Tanaka, Ph.D., of the Department of Electrical Engineering & Information Systems, and Center for Spintronics Research Network, University of Tokyo. “Our approach is, in fact, against the traditional views of material design for ferromagnetic semiconductors. In our work, we have made a breakthrough by growing an iron-doped semiconductor which shows ferromagnetism up to room temperature for the first time in semiconductors that have good compatibility with modern electronics. Our results open a way to realize semiconductor spintronic devices operating at room temperature.”

The researchers discuss their findings this week in Applied Physics Letters, from AIP Publishing. The researchers’ maverick move challenged the prevailing theory that predicted a type of semiconductor known as “wide band gap” would be strongly ferromagnetic. Most research focuses on the wide band gap approach. “We instead chose narrow-gap semiconductors, such as indium arsenide, or gallium antimonide, as the host semiconductors,” Tanaka said. This choice enabled them to obtain ferromagnetism and conserve it at room temperature by adjusting doping concentrations.

Investigators have long envisioned bridging semiconductors and magnetism to create new opportunities of utilizing spin degrees of freedom and harnessing electron spin in semiconductors. But until now, ferromagnetic semiconductors have only worked under experimental conditions at extremely low, cold temperatures, typically lower than 200 K (-73oC), which is much colder than the freezing point of water, 273.15 K. Here, K (Kelvin) is a temperature scale which, like the Celsius (oC) scale, has 100 degrees between boiling (373.15 K = 100oC) and freezing (273.15 K = 0oC) of water. 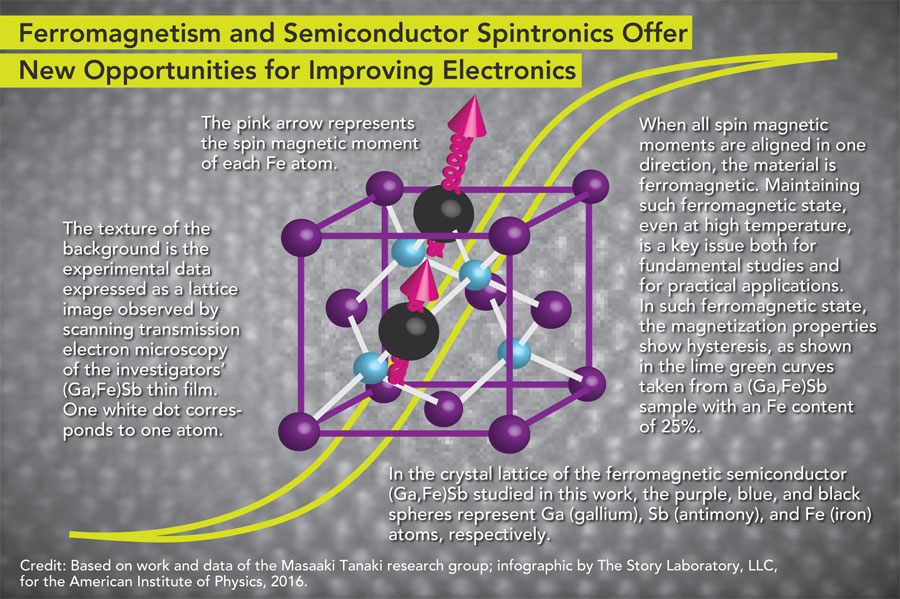 Potential applications of ferromagnetic-semiconductors include designing new and improved devices, such as spin transistors.

“Spin transistors are expected to be used as the basic element of low-power-consumption, non-volatile and reconfigurable logic circuits,” Tanaka explained.

In 2012, the team postulated that using iron as magnetic doping agents in semiconductors would produce performance advantages not seen in the more frequently studied manganese class of dopants.

Skeptics doubted this approach, but the team continued and successfully created a ferromagnetic semiconductor known as “n-type.”

“This was thought impossible by almost all leading theorists,” Tanaka noted. “They predicted that such n-type ferromagnetic semiconductors cannot retain ferromagnetism at temperatures higher than 0.1 K. We demonstrated, however, many new functionalities, such as the quantum size effect and the ability to tune ferromagnetism by wave function manipulation.”