A New Spin on Spintronics

WASHINGTON D.C., February 17, 2015 – A team of researchers from the University of Michigan and Western Michigan University is exploring new materials that could yield higher computational speeds and lower power consumption, even in harsh environments.

Most modern electronic circuitry relies on controlling electronic charge within a circuit, but this control can easily be disrupted in the presence of radiation, interrupting information processing. Electronics that use spin-based logic, or spintronics, may offer an alternative that is robust even in radiation-filled environments.

Making a radiation-resistant spintronic device requires a material relevant for spintronic applications that can maintain its spin-dependence after it has been irradiated. In a paper published in the journal Applied Physics Letters, from AIP Publishing, the Michigan research team presents their results using bulk Si-doped n-GaAs exposed to proton radiation. 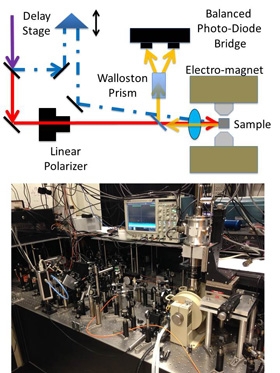 How Does Spintronics Work?

Modern electronic devices use charges to transmit and store information, primarily based upon how many electrons are in one place or another. When a lot of them are at a given terminal, you can call that 'on.' If you have very few of them at the same terminal, you can call that 'off,' just like a light switch. This allows for binary logic depending on whether the terminal is 'on' or 'off.' Spintronics, at its simplest, uses the 'on/off' idea, but instead of counting the electrons, their spin is measured.

"You can think of the spin of an electron as a tiny bar magnet with an arrow painted on it. If the arrow points up, we call that 'spin-up.' If it points down, we call that 'spin-down.' By using light, electric, or magnetic fields, we can manipulate, and measure, the spin direction," said researcher Brennan Pursley, who is the first author of the new study.

While spintronics holds promise for faster and more efficient computation, researchers also want to know whether it would be useful in harsh environments. Currently, radioactivity is a major problem for electronic circuitry because it can scramble information and in the long term degrade electronic properties. For the short term effects, spintronics should be superior: radioactivity can change the quantity of charge in a circuit, but should not affect spin-polarized carriers.

Studying spintronic materials required that the research team combine two well established fields: the study of spin dynamics and the study of radiation damage. Both tool sets are quite robust and have been around for decades but combining the two required sifting through the wealth of radiation damage research. "That was the most difficult aspect," explains Pursley. "It was an entirely new field for us with a variety of established techniques and terminology to learn. The key was to tackle it like any new project: ask a lot of questions, find a few good books or papers, and follow the citations."

Technically, what the Michigan team did was to measure the spin properties of n-GaAs as a function of radiation fluence using time-resolved Kerr rotation and photoluminescence spectroscopy. Results show that the spin lifetime and g-factor of bulk n-GaAs is largely unaffected by proton irradiation making it a candidate for further study for radiation-resistant spintronic devices. The team plans to study other spintronic materials and prototype devices after irradiation since the hybrid field of irradiated spintronics is wide open with plenty of questions to tackle.

Long term, knowledge of radiation effects on spintronic devices will aid in their engineering. A practical implementation would be processing on a communications satellite where without the protection of Earth's atmosphere, electronics can be damaged by harsh solar radiation. The theoretically achievable computation speeds and low power consumption could be combined with compact designs and relatively light shielding. This could make communications systems faster, longer-lived and cheaper to implement.