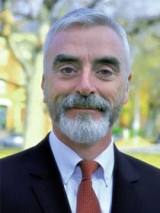 Michael H. Moloney is the ninth CEO of the American Institute of Physics (AIP)—a federation that advances the success of our 10 Member Societies and an institute that operates as a center of excellence supporting the physical sciences enterprise. For nearly a century, AIP has worked to advance, promote, and serve the physical sciences. Since joining AIP in early 2018, Moloney has been leading a strategic transformation effort for the Institute in preparation for its centennial anniversary in 2031. At the core of the transformation is AIP’s commitment to supporting its Member Societies to broaden their impact and achieve results beyond their individual missions and mandates, and to advancing the physical sciences writ large through independent research in social science, policy, and history.

Prior to joining AIP, Moloney was the Director for Space and Aeronautics at the U.S. National Academies of Sciences, Engineering, and Medicine. For more than 15 years at the Academies he was study director or senior staff on about 100 reports on space science, engineering and technology; aeronautics; materials science and engineering; and physics and astronomy. Previously, Moloney was a foreign service officer for the Irish government for seven years. An experimental physicist by training, Moloney holds a doctorate from Trinity College Dublin, in Ireland. His undergraduate degree in experimental physics is from University College Dublin—where, on graduation, he was awarded the Nevin Medal for Physics. Moloney is a member of the International Academy of Astronautics, an Associate Fellow of the American Institute of Aeronautics and Astronautics, a Fellow of the American Physical Society, and a Fellow of the Institute of Physics. He is a member of the Board of Directors of the Center for the Advancement of Science in Space (CASIS), the organization that manages the International Space Station (ISS) U.S. National Laboratory. He also sits on the Science, Technology Assessment and Analytics (STAA) Inaugural Polaris Council at the U.S. Government Accountability Office. Moloney is a recipient of a distinguished service award from the National Academies of Sciences, Engineering and Medicine.