We classify the first post-degree job of new physics PhDs into three main categories: potentially permanent positions, postdoctoral fellowships (postdocs), and other temporary positions. For most of the last two decades, the majority of new physics PhDs accepted a postdoc upon completing their degrees. A postdoc provides a temporary period of mentored research where new degree recipients can continue in their research and publish papers in the area of their dissertations or pursue other areas of research that might be of interest to them. 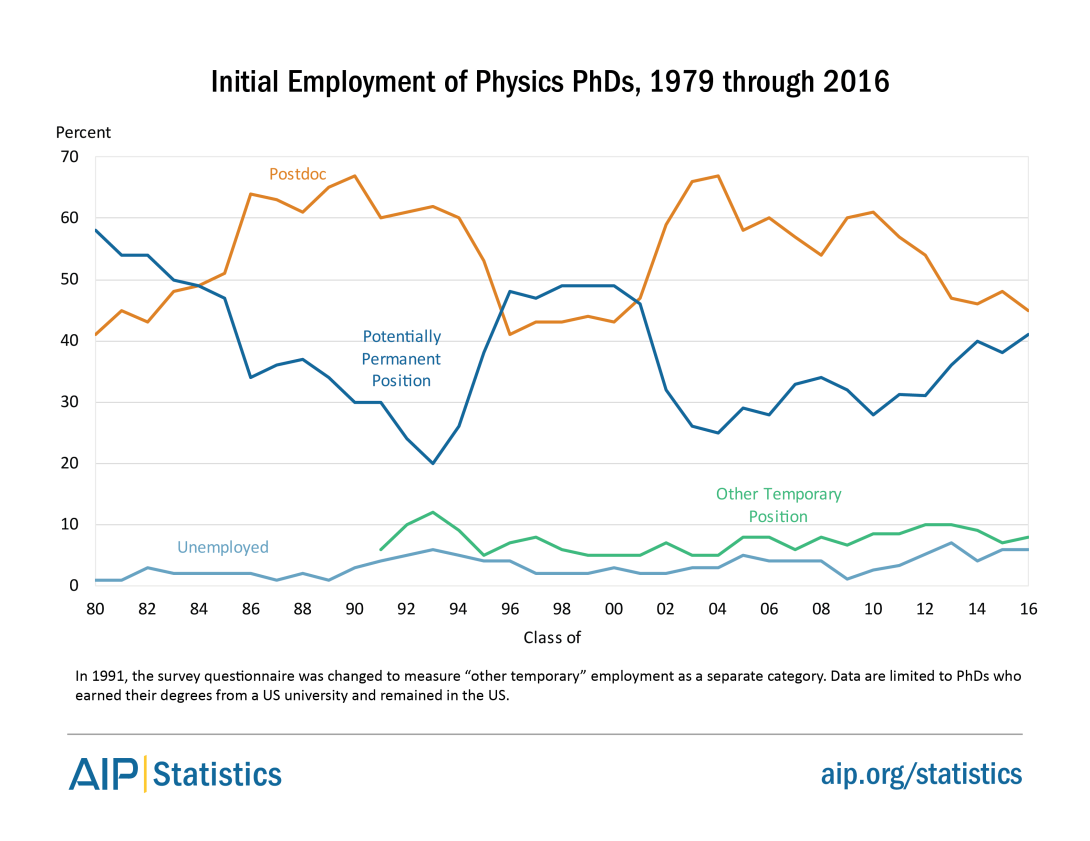 We categorize the third, and least common, initial post-degree employment outcome as “Other Temporary Positions.” In recent years, 5 to 10 percent of the new physics PhDs have accepted these positions. The difference between potentially permanent positions and other temporary positions is that the temporary positions, which are mostly comprised of visiting professors, lecturers, and research scientists at colleges and universities, have a set ending date; the potentially permanent positions do not. Some PhDs indicated that they were unemployed and seeking employment. This category has averaged about 5 percent of the respondents in recent years.

The data used for tables and figures in this focus on include physics PhDs who received their PhD from a US institution and were still residing in the US in the winter following the academic year in which they received their degree. For the combined classes of 2015 and 2016, non-US citizens comprised 47% of the physics PhDs conferred. Survey response data indicates that 9% of US citizens and 19% non-US citizens left the US after receiving their doctorates. The most common type of initial employment for both US and non-US citizens who left the US was a postdoctoral fellowship. 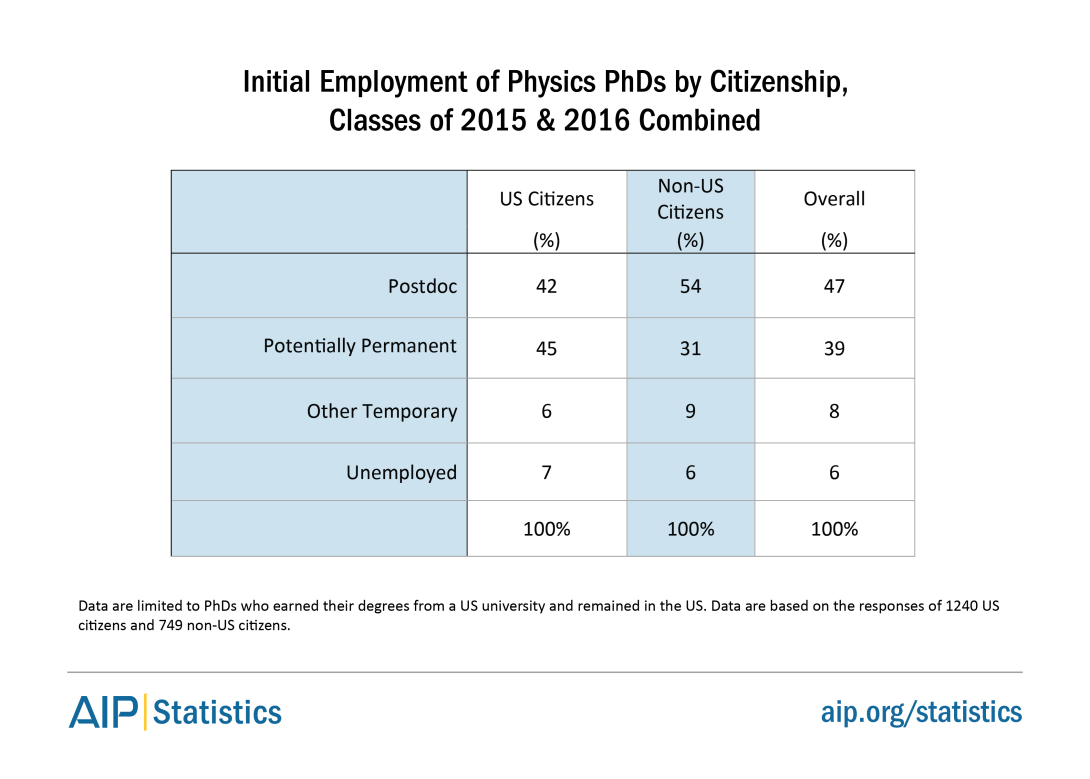 Initial post-degree outcome data for physics PhDs differ significantly by whether the degree recipients were US citizens or not. Table 1 disaggregates initial outcomes by US citizenship for the combined classes of 2015 and 2016. Non-US citizens were more likely to accept a postdoctoral fellowship than their US citizen counterparts, 54% versus 42%.

There is a variety of reasons why new PhD recipients choose to accept temporary postdoctoral appointments. These decisions may be influenced by professional goals and personal circumstances. We asked new PhDs who accepted postdocs to indicate how much influence specific reasons had on their taking a postdoc. We have posed this question to new PhDs for a number of years, and the most consistently cited reason is that it is a “necessary step to get a future position.” This is not surprising, as having completed a postdoc is generally considered a prerequisite to getting a faculty position, especially at large research universities. The visa status of non-US citizens was an additional potential influence on their decisions to accept postdocs. Of the non-US citizens remaining in the US who accepted a postdoc, 44% indicated that visa restrictions limited their options. 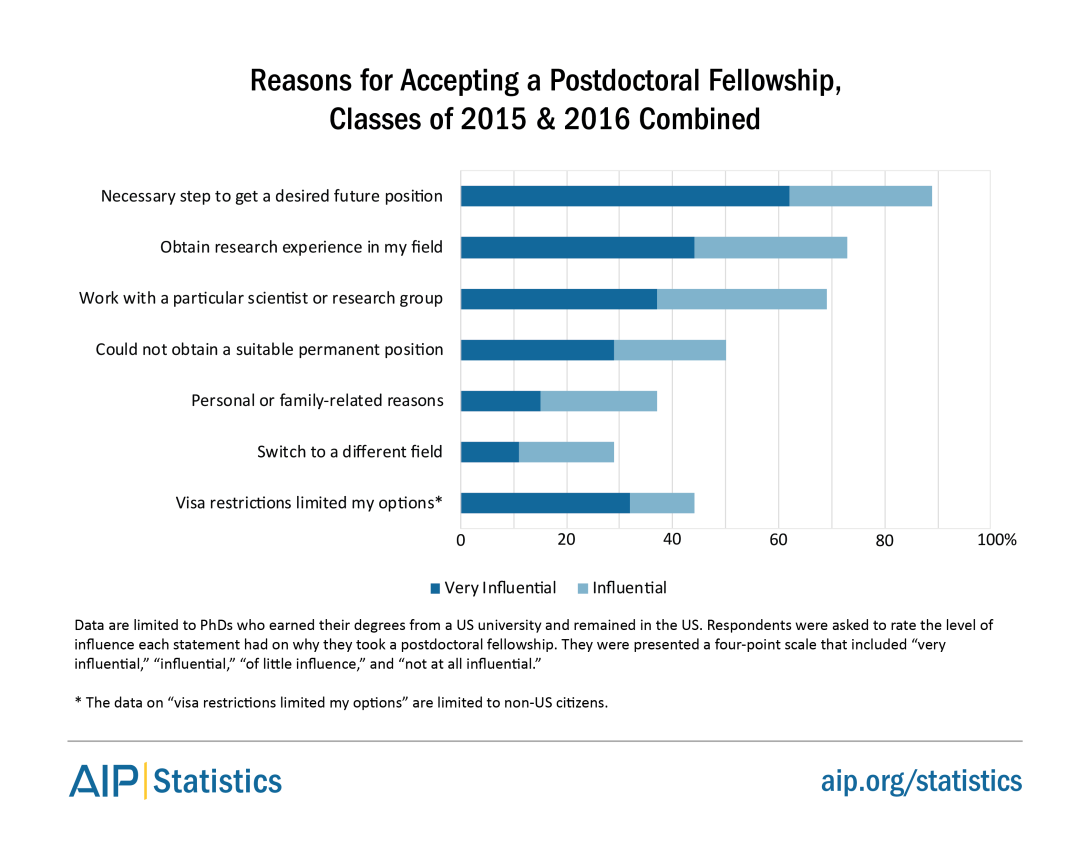 Each fall the Statistical Research Center conducts a Survey of Enrollments and Degrees, which asks all degree-granting physics and astronomy departments in the US to provide information concerning the number of students they have enrolled and counts of recent degree recipients. At the same time, we ask for the names and contact information for recent degree recipients. This degree recipient information is used to conduct our follow-up survey in the winter following the academic year in which respondents received their degrees. The post-degree outcome data in this focus on come from that survey.

The follow-up surveys for the classes of 2015 and 2016 were administered in a web-based format. Those who did not respond were contacted up to five times with invitations to participate in the survey. The physics PhD classes of 2015 and 2016 consisted of 1,860 and 1,819 graduates, respectively. We received post-degree information on 44 percent of these degree recipients. Sixty-five percent of these responses came from PhD recipients themselves, while the other 35 percent came from advisors. PhDs who left the US after receiving their degrees were not included in the analysis.