This report presents the initial outcomes of exiting physics master’s degree recipients from the classes of 2016, 2017, and 2018 combined. The majority of US citizens entered or remained in the workforce after receiving their degrees, whereas the majority of non-US citizens continued with graduate study, either in physics or another field. This report also compares the frequency of use for a variety of skills and knowledge areas for exiting physics masters employed in the private sector and academia.

After receiving their degrees, exiting master’s degree holders have a variety of employment and education options available to them. Many students enter or remain in the workforce, whereas others continue their graduate education in physics or other subjects. Some new exiting masters, mostly non-US citizens, leave the US after receiving their degrees.

The initial post-degree outcomes of new physics masters are greatly influenced by the citizenship of the degree recipient (Figure 1). The majority of masters with US citizenship either entered the workforce or remained in positions they held prior to receiving their degrees. The most common post-degree outcome for masters with non-US citizenship was the continuation of their graduate studies. Almost a quarter of non-US citizens left the country upon receiving their master’s degrees in physics, compared to only 3% of US citizens. These differences in initial outcomes by citizenship have been the norm for exiting physics masters for many years.

Many of the employed new physics masters did not intend to end their education at the master’s level, with about 12% indicating that that they intended to return to graduate school in the future. For masters choosing to immediately continue their graduate studies, the majority were enrolled in a physics or astronomy program at another US institution. The most commonly cited “Other Field” of graduate study pursued was engineering. 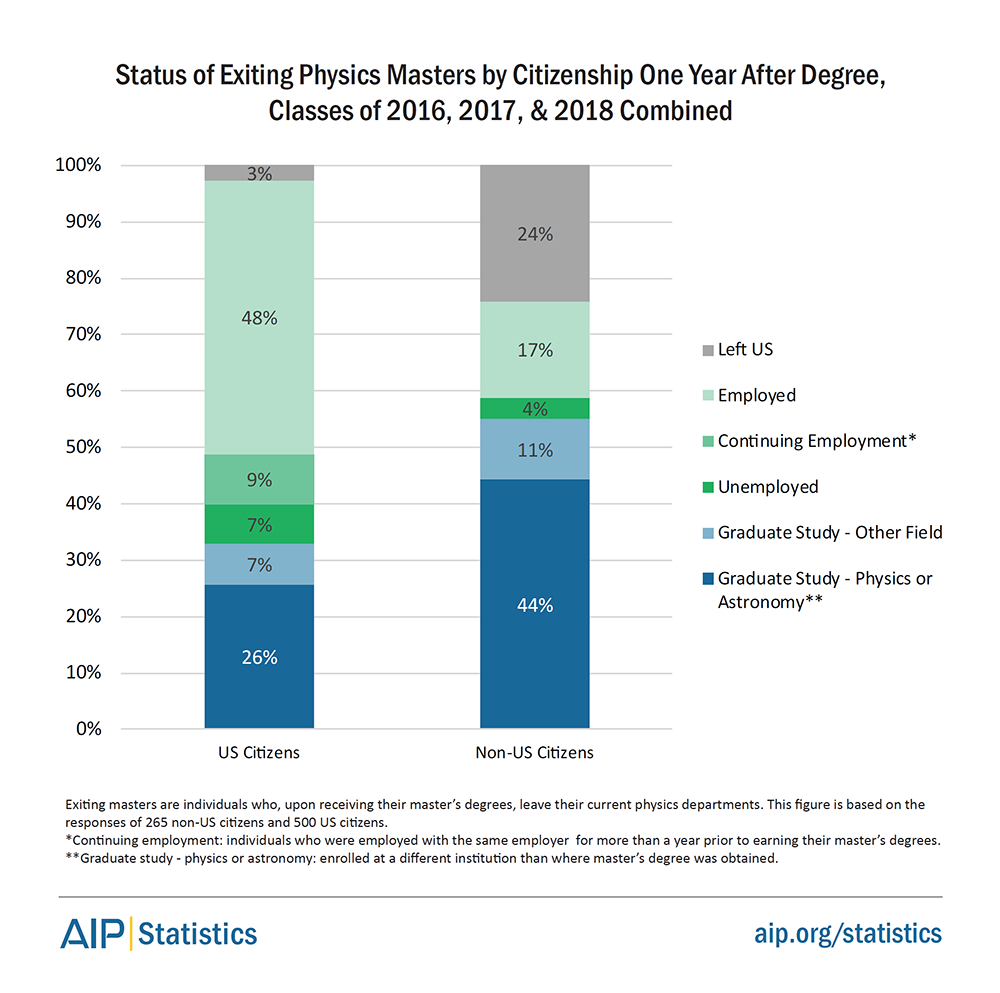 The average age for physics masters from the classes of 2016, 2017, and 2018 was 28.4 years old, with a median of 26.6. Those who were continuing in positions they held prior to receiving their degrees were, on average, about four years older than those who entered new positions. The classes of 2016, 2017, and 2018 combined were comprised of 24% women and 34% non-US citizens (Table 1). Fifteen percent of respondents indicated that they started their secondary education at two-year colleges.

The private sector employs the largest proportion of physics masters, with more than half of those employed indicating that this sector is where their jobs were located. The next largest employment sector was two- and four-year colleges and universities (Figure 2). Almost all of those employed at high schools were teachers in STEM subjects. About one in six employed masters (16%) were continuing positions that they had held for more than a year prior to receiving their degrees.

About 15% of the employed physics masters indicated their positions were part time (less than 35 hours a week). Exiting masters employed at colleges and universities had the highest proportion working part time (41%). About 8% of those employed in the private sector indicated they were employed part time. 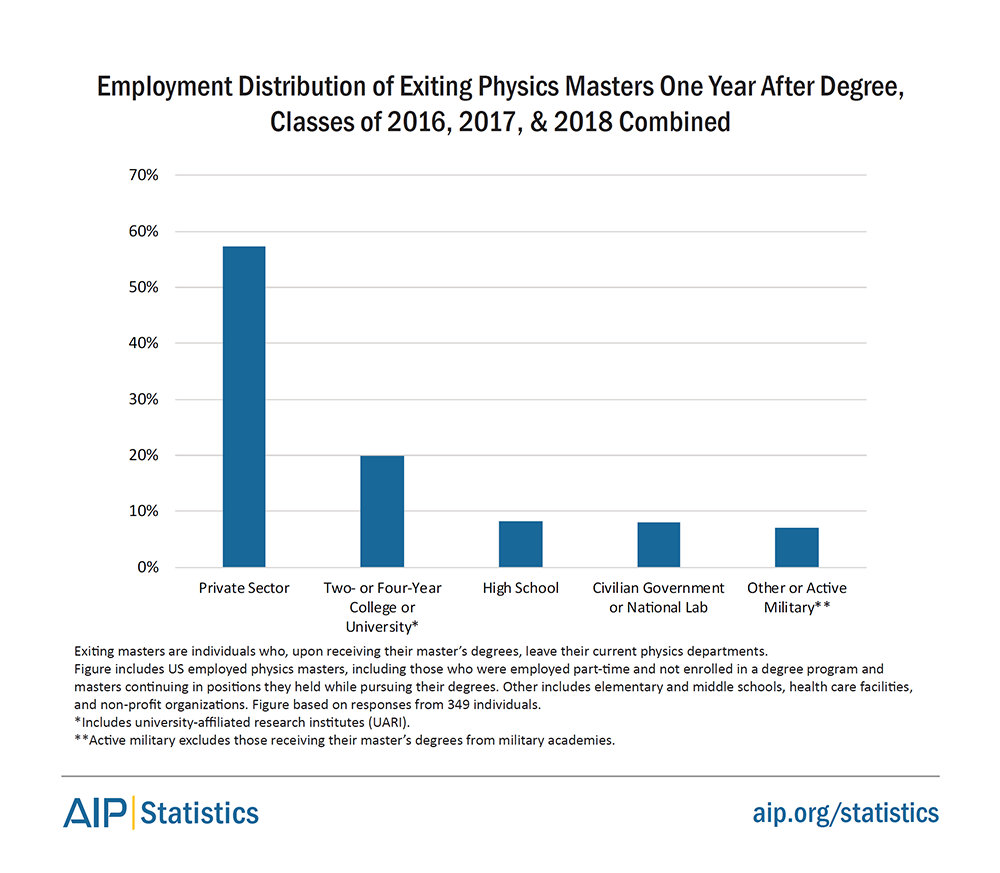 The private sector employed the largest proportion of new exiting physics masters, with almost 60% of those employed. Positions in the private sector covered a range of different jobs, from large corporations to self-started companies. The vast majority of these jobs were in a STEM field, with engineering being the most common. Job titles often included words such as “engineer” or references to various analyst positions.

Just under a tenth of employed physics masters were employed at high schools. In many states a master’s degree is mandatory for high school teachers to maintain their certification. The most commonly taught subject among this group was physics, although there were also a number of respondents who indicated that they were teaching mathematics. Very few taught non-STEM subjects.

Exiting physics masters in the active military come from two sources. The primary source is master’s recipients that attended one of two military academies with graduate physics programs: the Naval Postgraduate School (California) and the Air Force Institute of Technology (Ohio). The other source is active military personnel who attended a nonmilitary university to obtain a physics master’s degree. Physics masters who are military personnel have specialized degrees and enter or continue in a variety of highly technical positions within the armed services. 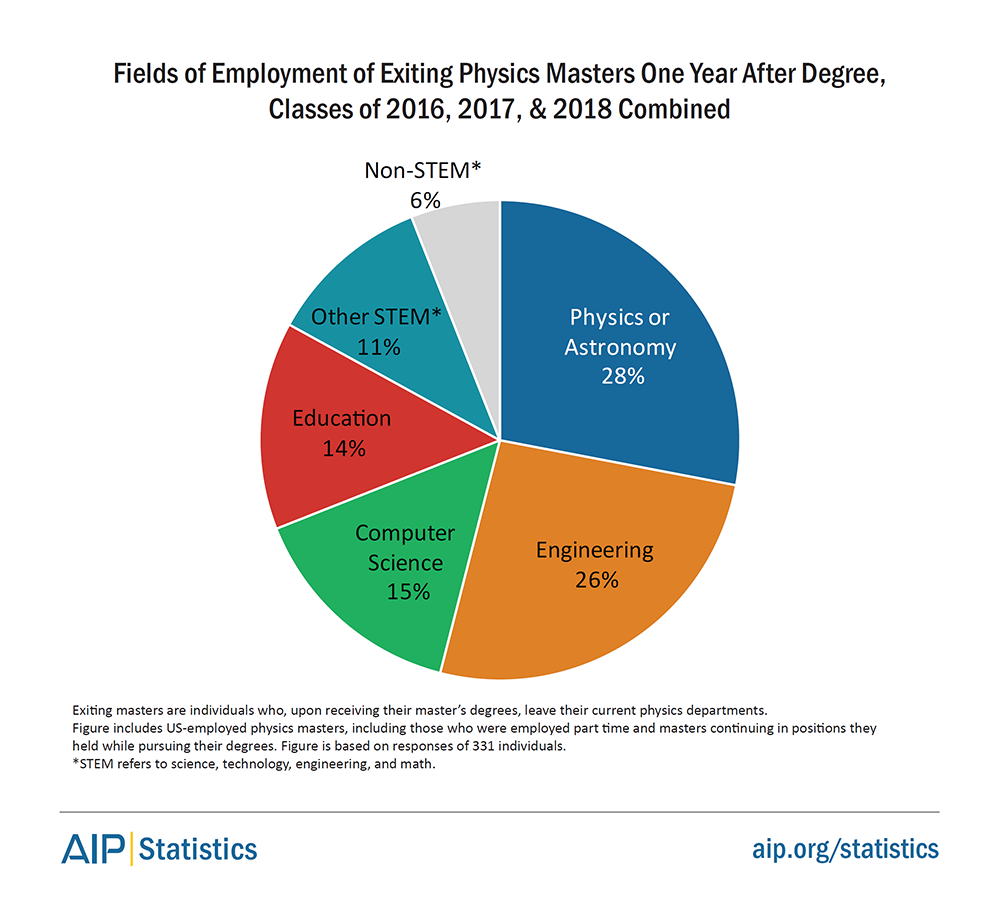 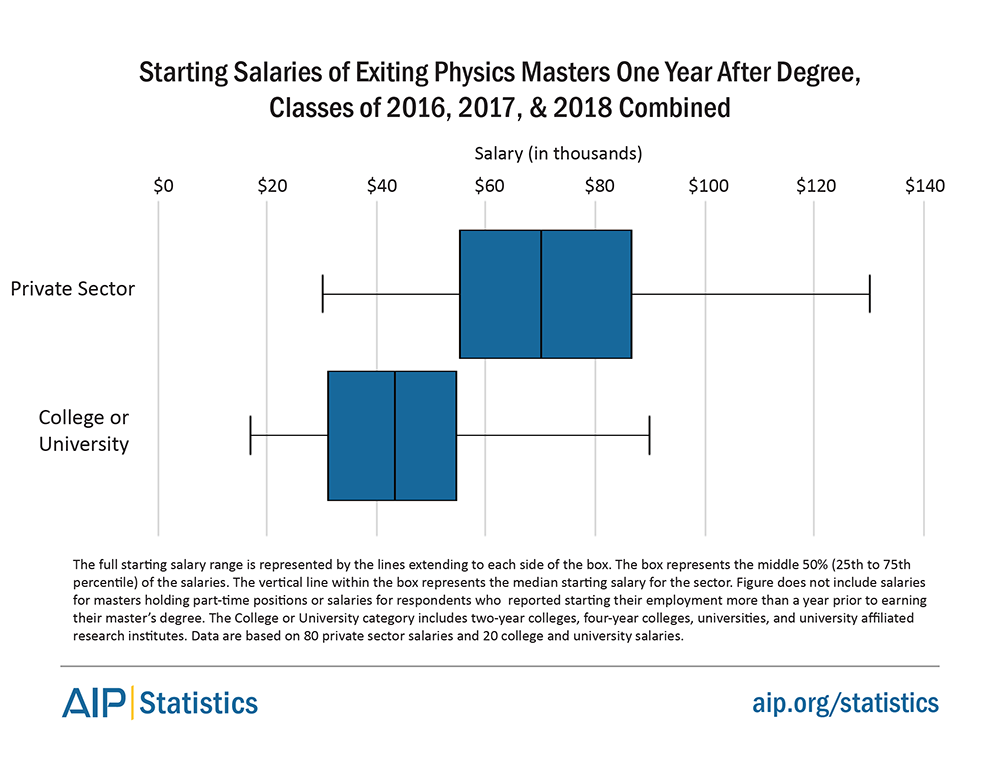 Physics masters employed in academia were more likely to report that they were using their physics and advanced math knowledge than those employed in the private sector. Those in the private sector were more likely to report greater use of a variety of skills than those in academia, including working on teams, working with clients, and performing advanced research. Generally, those in the private sector used technical skills more regularly than those in academia. They also often reported higher rates of using “soft” skills, which often involve interaction with other individuals. Regardless of sector of employment, physics masters reported that they regularly solved technical problems and needed to use their programming skills (Figures 5 & 6). 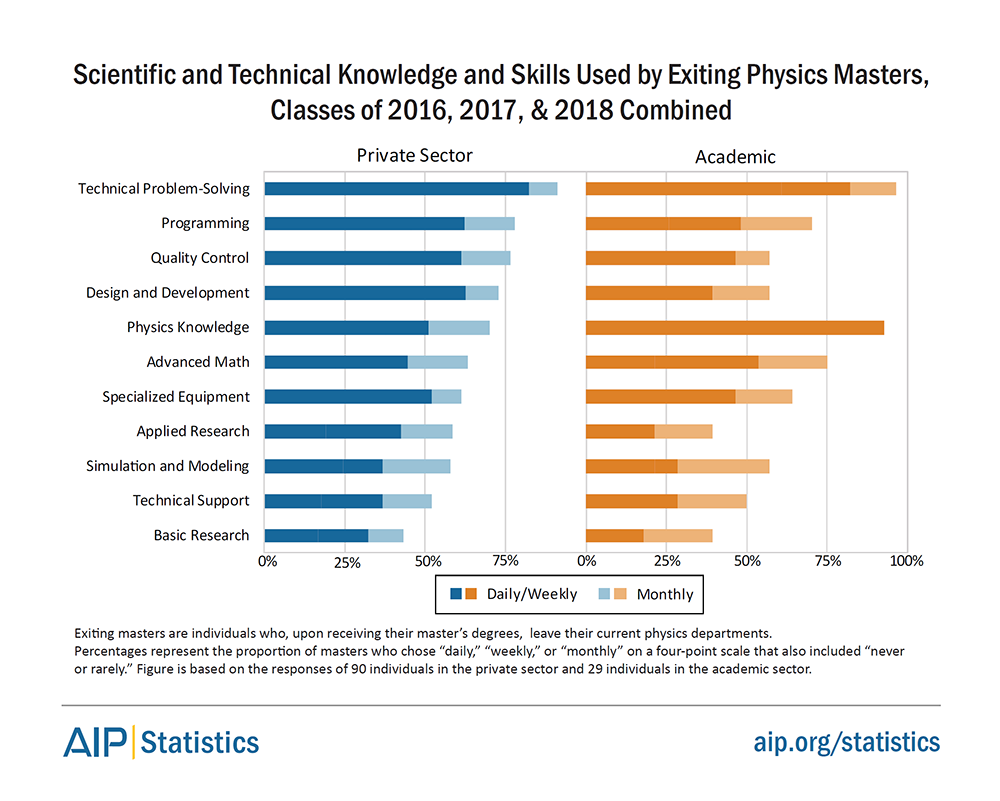 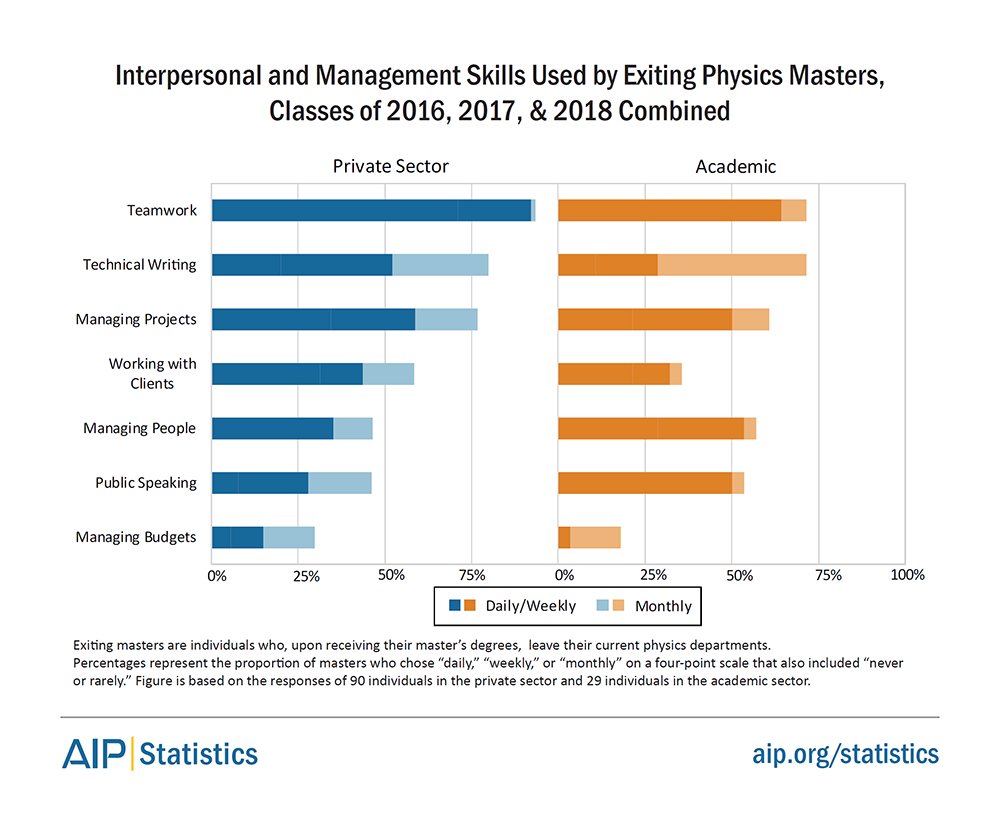 Masters were asked what they found the most rewarding in the positions they held. Individuals employed in the private sector often cited the ability to expand their knowledge and the challenging work as rewarding aspects of their employment. There were also numerous mentions of appreciating that their work was hands-on and that they were solving meaningful real-world problems. The most commonly reported positive aspects of academic employment included being able to teach subjects that they were passionate about and finding the work fulfilling.

Evaluation of Education and Future Plans

When asked, “What would you do differently concerning your physics education?” the most common responses from physics masters indicated that they were generally happy with their degrees and would change very little. There were some noteworthy exceptions. There were several mentions of wishing they had focused more on computer science or programming classes. Additionally, there were a variety of respondents who would have liked to get more involved in research through jobs or internships during their time in graduate school. A number of respondents also indicated that they should have immediately entered into a PhD program rather than a master’s program.

Looking toward the future, a third of exiting physics masters indicated that in ten years’ time they hoped to work in the private sector.   A similar proportion hoped to be employed at a four-year college or university. More than half of those who were employed in an academic setting hoped to continue to work within that sector, while those employed in the private sector more often indicated that they hoped to continue their careers in a different sector.

Each fall, the Statistical Research Center conducts the Survey of Enrollments and Degrees. This survey asks physics and astronomy departments to provide information on the number of students enrolled and the number of recent degrees conferred the previous academic year. This survey also asks for the names and contact information of recent degree recipients. This degree recipient information is used to conduct our master’s follow-up survey in the winter following the academic year in which they received their degrees.

Recent master’s degree recipients can be very difficult to reach because they tend to move after receiving their degrees and frequently do not keep in contact with their master’s-granting departments. For assistance in determining degree recipient outcomes and to help obtain updated contact information, we contact the advisors of nonresponding degree recipients.

There are two military academies that have unique graduate physics programs: the Naval Postgraduate School (California) and the Air Force Institute of Technology (Ohio). These two departments have very specialized master’s programs and were responsible for conferring about 4% of all exiting physics master’s degrees in the classes of 2016, 2017, and 2018. The degree recipients from those programs typically stay in one of the branches of the armed services and by the nature of their positions are hard to reach with our follow-up survey. The post-degree outcome data for these individuals are not included in the tables and figures of this report.

We thank the many physics degree recipients and faculty advisors who made this publication possible.

By Jack Pold and Patrick Mulvey