“The total cost of all basic research from Archimedes to the present,” my former teacher, the late physicist and international science leader Victor Weisskopf wrote in 1969, “is less than the value of ten days of the world’s present industrial production.”

Weisskopf’s words are highly relevant as Congress begins writing appropriations bills providing federal support for basic research in the new fiscal year starting on October 1. The House of Representatives has passed a bill that includes money for the Department of Energy’s Office of Science, the major supporter of basic research funding for the physical sciences community. The budget for this office would increase 0.6 percent under this legislation. (See FYI #53.) Another key bill that includes money for the National Science Foundation, NASA, the National Institute of Standards and Technology, and the National Oceanic and Atmospheric Administration is moving in the House. All of these agencies fund research performed by the researchers represented by our Member Societies. 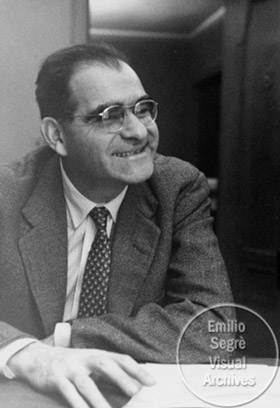 Few people understood American competitiveness as well as Weisskopf did. His career included contributions to quantum mechanics and the Manhattan Project, a stint as director-general of the European Organization for Nuclear Research (CERN), and chairmanship of one of the world’s largest physics departments at MIT. Commenting on the launch of Sputnik during the Cold War, Weisskopf wrote: “Fundamental research creates the intellectual climate in which our modern civilization flourishes. It pumps the lifeblood of ideas and inventiveness not only into the technological laboratories and factories, but into every cultural activity of our time. The case for generous support for pure and fundamental science is as simple as that.”

Support for basic research has been quite strong on Capitol Hill, although it has not always translated into the level of funding that many feel is necessary for the United States to remain competitive with other nations. Federal R&D funding as a share of the total federal budget significantly declined between 1985 and 2015 (source: American Association for the Advancement of Science). Groups like the Council on Competitiveness, the Business Roundtable, the National Association of Manufacturers, the US Chamber of Commerce, and the National Academy of Sciences have called for restoring competitiveness in numerous reports—including a just-issued report from the Massachusetts Institute of Technology. That report, “The Future Postponed – Why Declining Investment in Basic Research Threatens a U.S. Innovation Deficit,” offers examples of how greater funding would enable advances in treatments for Alzheimer’s disease, space exploration, quantum information technologies, energy, photonics, and many other important areas. 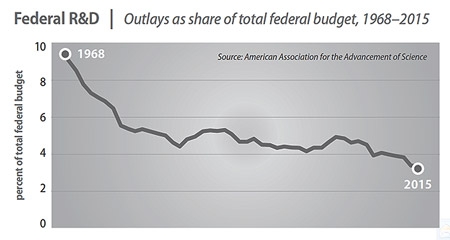 The pattern—basic research leading eventually to technological transformation—is an enduring one, as Weisskopf pointed out in highlighting the return on investment from all basic research since Archimedes. Radio, television, and radar first required James Clerk Maxwell’s studies of electromagnetism. James Watson and Francis Crick could not have predicted the full extent to which solving the structure of DNA would benefit medicine—and life.

After I left the training provided by Victor Weisskopf and other dedicated teachers at MIT, I was fortunate to spend more than 30 years of my career working as a physicist at two Department of Energy national laboratories. At Princeton’s Plasma Physics Laboratory, the main mission was the development of fusion energy—a technology that won’t be applied for many decades to come. However, as the field worked toward energy break-even demonstrations in the mid-1990s, practitioners produced fundamental advances in plasma processing for electronic materials and developed materials for severe environments. At Jefferson Lab, the primary mission was fundamental nuclear physics and the short-term payoffs were in fields as diverse as radiation protection, medical diagnosis, and powerful lasers.

The knowledge gained by conducting basic research in all scientific fields offers similar payoffs in every aspect of our daily lives. Decisions made in Congress in coming months will determine the pace of these discoveries in coming years.

An oral history interview with Victor Weisskopf, conducted by Charles Weiner and Gloria Lubkin in 1966, is available through  the AIP’s Niels Bohr Library and Archives.