One of the Factors that contributes to the persistence of African American students in physics and astronomy is Physics Identity, but what are some effective ways to help African American students build their physics identity and how does the development of physics identity interact with racial or other social identities? In this webinar, we will explore these topics and more, going deeper into this concept and bringing it to life with personal experiences shared by the speakers.

In this webinar you will: 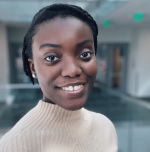 Dr. Felicia Onuma received her PhD in Higher Education from the University of Maryland, College Park. Her research examines the precollege and college experiences of Black (immigrant) students in science, technology, engineering, and mathematics fields and Nigerian immigrant-origin students attending private elite colleges and universities. She has published her work in peer-reviewed journals including the Journal of Women and Minorities in Science and Engineering and the Journal of Diversity in Higher Education and has a forthcoming publication in the Journal of Minority Achievement, Creativity, and Leadership.

As part of her research endeavors, she has also presented her work at several national conferences including the Association for the Study of Higher Education (ASHE) conference and the American Society for Engineering Education (ASEE) conference. As a graduate student, Dr. Onuma worked with Dr. Sharon Fries-Britt to conduct student interviews and analyze interview data for the TEAM-UP research study. Dr. Felicia Onuma is currently an Academic Consultant at BeMo Academic Consulting.

Charles earned his B.S. with honors in physics at the University of Minnesota, Twin Cities. Under the guidance of Prof. Jack Harris, he then earned his Ph.D. in physics at Yale University, where he performed experiments with superfluid-helium-filled optical cavities and constructed and characterized a new experiment for studying magnetically levitated drops of superfluid helium in vacuum. Charles is currently a National Academies of Science, Engineering and Medicine Ford Foundation Postdoctoral Fellow in the Ultracold Atomic Physics Group in the Department of Physics at the University of California, Berkeley, directed by Prof. Dan Stamper-Kurn, where he performs experiments with ultracold atoms in various optical lattice geometries.

Outside of the laboratory, Charles is co-founder and co-lead organizer of #BlackinPhysics week, a week dedicated to celebrating the historical contributions of Black physicists and to painting a more complete picture of what physicists look like. Further, he recently wrote a piece for Physics Today about Black underrepresentation in physics, which has been widely read and continues to spark important conversations regarding changes in the physics community that are necessary to improve the climate.

Dr. Simone Hyater-Adams is a physicist, artist, educator, and researcher with a passion for creating more opportunities for Black STEM students.  After receiving her B.S. in Physics from Hampton University, she pursued graduate studies at the ATLAS Institute at the University of Colorado Boulder (CU Boulder) where she was a National Science Foundation Graduate Research Fellow. Following her time at Boulder, Simone worked as an Education and Diversity Programs Manager at American Physical Society for their National Mentoring Community. Recently, she started a position as the Director of Programs at STEM From Dance, a New York-based non-profit that provides STEAM outreach to girls of color. In addition to this, Simone is a performance artist who has pursued many art forms such as dance, spoken word, and music.

The TEAM-UP Project webinar series features talks that more deeply explore the five factors that contribute to African American undergraduate student persistence in physics and astronomy as noted in the TEAM-UP report, The Time is Now: Systemic Changes to Increase African Americans with Bachelor’s Degrees in Physics and Astronomy. Those factors are: Belonging, Physics Identity, Academic Support, Personal Support, and Leadership & Structures.