The AIP National Task Force to Elevate African American Representation in Undergraduate Physics & Astronomy (TEAM-UP) spent two years investigating the reasons for the persistent underrepresentation of African Americans in physics and astronomy and produced a report with its findings. 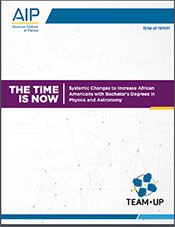 The Time Is Now: Systemic Changes to Increase African Americans with Bachelor’s Degrees in Physics and Astronomy

In this groundbreaking report, TEAM-UP uncovers long-term systemic issues within the physics and astronomy communities that contribute to the underrepresentation of African Americans in these fields and makes important, actionable recommendations for community wide efforts to reverse this trend.

AIP has received a grant from the Heising-Simons Foundation to organize two TEAM-UP Report Implementation workshops (2020 – 2021) for a core set of departments to share their learnings from the TEAM-UP report, The Time is Now, develop strategic plans for implementing the report recommendations, and develop a set of best practices or guidance for physics and astronomy departments as they pursue the goal of increasing African American students earning bachelors degrees in their programs.

The TEAM-UP Workshop Organizing Committee is developing a timeline and agenda.

There are no upcoming events at this time.

Partial funding for TEAM UP provided by the Research Corporation for Science Advancement.

Click the button below to take our brief survey to show how you are using the TEAM-UP Report and implementing its suggestions.

TEAM-UP in the News