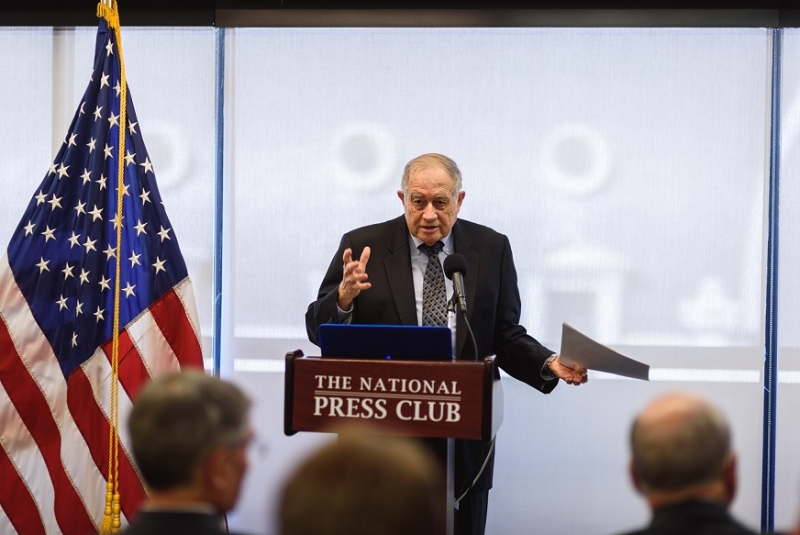 A new report published by Rice University’s Baker Institute for Public Policy and led by senior fellow in science and technology policy Neil Lane argues that building a strong advisory capacity for science and technology should be among the first issues the next president-elect tackles following his or her election. Lane served under President Bill Clinton as science advisor, director of the White House Office of Science and Technology Policy (OSTP), and before that as director of the National Science Foundation.

At an event at the National Press Club today announcing the release of the report, Lane outlined five recommendations for the next president and another five for the next president’s science advisor. The ten recommendations draw on published materials, including books, journals, peer-reviewed articles, interviews, reports from think tanks and federal agencies, and the reviews of over 60 S&T policy experts.

The report, entitled “The Vital Role of the White House Office of Science and Technology in the New Administration,” makes the following five recommendations for the next president:

And it makes the following five recommendations for the next president’s science advisor:

Lane: S&T is connected to everything the president does

For Lane, the most important takeaway for the next president is to keep a “laser focus” on S&T, starting early on in the next administration, and to quickly develop a plan to integrate S&T advice into decision-making across the government. He emphasized that “S&T is connected to everything [the president] does,” and observed that upon election the new president-elect will immediately have to develop the federal budget request to Congress as well as address a number of pressing regulatory issues.

Lane argued the immediacy of need increases the urgency of putting together an S&T team as soon as possible. He called for the presidential transition team to move quickly to to select a widely respected science advisor who will have the president’s ear and be granted access to decision-makers in the White House and elsewhere across the government.

In a press release accompanying the report, Lane is quoted as saying,

Considering the many policy challenges that relate to science and technology and the accelerating pace of scientific discovery and technology innovation across the globe, it is critically important that the president move quickly to appoint the science adviser and organize a capable OSTP that can begin to engage the many executive departments and agencies that support R&D and rely on advances in science and technology to carry out their missions.

In outlining the report, Lane highlighted the importance of providing OSTP and the NSTC – an interagency body chaired by the president that establishes national goals for S&T investments and prepares R&D strategies across the federal agencies - ample resources and political access. Lane also zeroed in on the importance of developing and implementing an administration-wide S&T strategic plan, ideally within 100 days of inauguration.

One novel suggestion in the report is for the director of OSTP to appoint a chief economic advisor to interface with the president’s Council of Economic Advisers. The report also recommends the appointment of a new OSTP associate director focusing on the academic research enterprise. The high-ranking official would be responsible for overseeing government-academic partnerships and assess and manage the impact of administrative and regulatory burden on federally funded research. (The National Academies released a report in September 2015 titled “Optimizing the Nation’s Investment in Academic Research” that recommended the appointment of such an official at OSTP.)

Concurrent with the report release, the Baker Institute announced a list of 21 national science and innovation leaders who are endorsing the report. Three of those endorsees were present at today’s event and spoke in support of Lane’s report and recommendations: Rush Holt, CEO of the American Association for the Advancement of Science for former member of Congress; Norm Augustine, retired chairman and CEO of Lockheed Martin; and Deborah Wince-Smith, President and CEO of the Council on Competitiveness.

During Holt’s remarks, the former congressman explained that S&T is embedded in nearly every issue with which the president deals, including “in issues of justice, social welfare, diplomacy, and agriculture.” Therefore, the “science adviser should be present when decisions in any of those areas are under consideration.” The president’s science adviser is more than a mere representative to a “science constituency,” argued Holt.
Augustine spoke to the role the next president’s OSTP ought to play in shoring up the nation’s lagging R&D leadership internationally:

The U.S. research effort is at a critical moment in the nation’s history. Funds are being reduced. Other nations are investing more, even while there are more opportunities in S&T than ever before — in quantum mechanics, robotics, informatics, and other fields. OSTP is really the only organization that has a broad enough charter to provide advice on S&T that cuts across the responsibilities of all the departments and agencies.

Wince-Smith wrapped up the event with remarks that framed OSTP as an indispensible thought leader, connector, and convener in advancing national interests related to innovation and competitiveness:

Opportunity is going to come from all the innovations and investments in R&D that are underway: the next generation of the digital revolution, exascale computation and beyond, data analytics, biotechnology convergence, gene editing, the nano-revolution. … There is no place in the government with the exception of OSTP that can look at all those things in a cross-cutting way and look at what are our priorities in S&T and how can we advance them on a large scale.