The House voted mostly along party lines to approve a bill sponsored by House Science Committee Chairman Lamar Smith that aims to bring National Science Foundation research in line with the “national interest,” but the bill faces strong opposition from the White House and many House Democrats, including committee ranking member Eddie Bernice Johnson.

On Feb. 10, members of the House vigorously debated and voted on controversial legislation sponsored by House Science Committee chairman Lamar Smith (R-TX) that would require the National Science Foundation (NSF) to justify in writing that every grant or cooperative agreement it funds is “worthy of Federal funding” and “in the national interest,” according to seven specific definitions included in the bill. Following debate, the House voted 236 to 178 to approve the “Scientific Research in the National Interest Act,” mostly along party lines.

Since Smith introduced the measure last July, the scientific community has delivered a range of responses, ranging from strong opposition (see statements of opposition from seven scientific societies here) to non-response. The bill has proved divisive in the House, provoking a vigorous debate in committee last fall and on the floor earlier this month.

Smith has forged ahead despite resistance. Leading opponents include House Science Committee ranking member Eddie Bernice Johnson (D-TX), physicist and Rep. Bill Foster (D-IL), and the President’s science advisor and physicist John Holdren, and other senior administration officials, who issued a statement indicating they would advise the President to veto the legislation.

FYI covered the bill last summer after Smith introduced it, last fall after committee consideration and approval, and in early February as floor consideration approached. The House also passed similar (but not exactly the same) language last May as part of the “America COMPETES Reauthorization Act of 2015,” a bill which the scientific community vehemently opposed. Smith revised the America COMPETES “national interest” language to address some of the concerns of the scientific community before he introduced it as a standalone bill. 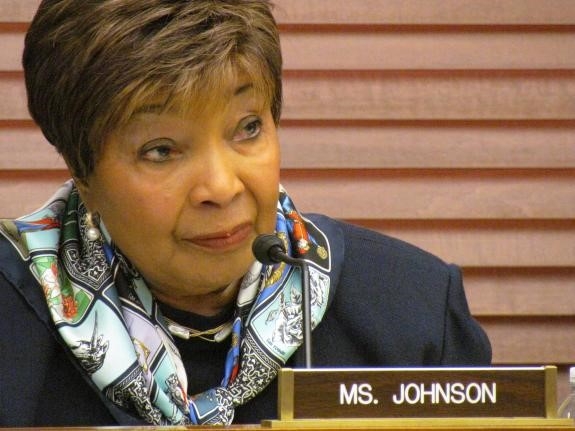 Johnson opened her speech on the House floor on Feb. 10 by defending NSF and its grant making process, saying NSF is already in the national interest and has been for 60 years. She argued Smith’s legislation would undermine science, especially high-risk, high reward science and called the bill unnecessary, saying it would only add bureaucracy and paperwork burden on the scientific community.

Among Johnson’s primary concerns is that the bill would chip away at the scientific merit review process by introducing a political review process with members of Congress as the reviewers. In the report filed to accompany the bill, Johnson stated:

Most Members of Congress lack the relevant expertise to fairly evaluate the merits or value of any particular grants…If we do not trust the Nation’s scientific experts to make that judgement on whether a scientific grant is worth of funding or not, then who are we to trust?

Johnson accused Smith and other leaders in the majority of engaging in a “relentless and pernicious campaign against research grants with silly or odd sounding titles,” including “an unprecedented rifling through 70 NSF grant reviews.” During these reviews the committee found no evidence of wrongdoing, said Johnson. Rather “each of the research grants…passed NSF’s merit review process with flying colors.”

Johnson pointed to a study that NSF funded in the 1970s - maligned in the Senate at the time - titled “The Sex Life of the Screwworm.” This research, Johnson said, shed light on a pernicious cattle pest, saved the cattle industry around $20 billion, and significantly reduced the cost of U.S. beef.

Moments before he secured its passage, Smith asserted his bill is important for transparency and accountability of science. He highlighted NSF grants awarded in recent years that he claims few Americans would consider to be in the national interest. Among those include,

$700,000 for a climate change-themed musical, $487,000 to study the Icelandic textile industry during the Viking era, and $220,000 to study animal photos in National Geographic magazine. …
When the NSF funds such projects as these, there is less money to support worthwhile scientific research that keeps our country on the forefront of innovation.

The National Science Foundation Act of 1950 that created NSF does not explicitly require science to serve the national interest, but it established NSF’s mission “to promote the progress of science; to advance the national health, prosperity, and welfare; and to secure the national defense.” In Smith’s view, his legislation would reaffirm and restore this mission, as well as add credibility to NSF and its grant making process.

The House rejected by a vote of 181 to 235, however, an amendment to the bill offered by Johnson which would have changed the determination of national interest to explicitly align with NSF’s founding mission. Smith was among those who voted against Johnson’s amendment.

Smith argued NSF is already adopting policies, under new grant guidelines the research agency issued in December 2014, that fulfill the requirements of his bill. Further, he pointed to testimony before his committee in 2015 by NSF Director France Córdova in which she indicated that Smith’s legislation would be compatible with the new NSF guidelines.

During floor discussion, Johnson begged to differ: “In [Córdova’s] policy, there is no separate list defining national interest with criteria that in fact promote more applied research, not basic research.”

Smith defended against those who have said the bill would tell scientists how to think under NSF’s existing merit review system. He emphasized that scientists would still govern the NSF grant making process and that the bill includes a provision to ensure it is not interpreted as altering NSF’s intellectual merit or broader impacts criteria it currently uses to evaluate grant applications.

In a comment posted on the White House website, Holdren questioned whether the authors of the bill understood the distinction between basic and applied research. He expressed great concern that the legislation would have “a chilling effect on the total amount of basic research that scientists propose and that NSF chooses to fund…and likely reduce the amount of high-risk, high return research proposed and funded in both basic and applied domains.”

In the days before the House vote, the White House issued a statement of administration policy opposing the bill and indicated that the President would be advised to veto it. Last spring, the White House also threatened to veto the America COMPETES bill that contained similar (but not exact) language.

Under the shadow of a likely veto, the “Scientific Research in the National Interest Act” faces long chances at becoming law while President Obama remains in office, but nothing would stop Smith from reintroducing the legislation in future Congresses.