In a new executive order, President Obama has directed federal agencies and the White House to focus on national preparedness for space weather, calling it an “all-of-nation endeavor.” 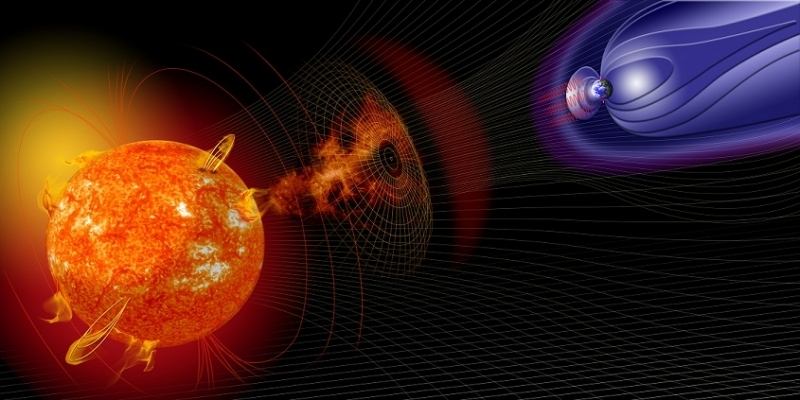 This rendering of Sun-Earth interactions captures the multiple dynamics that determine space weather impacts on Earth, including the Sun’s and Earth’s magnetic fields, the positioning of the Earth with respect to the Sun, and the various types of solar activity. (Image credit – NASA)

In an executive order issued on Oct. 13, President Obama made it official government policy to coordinate and prepare the nation for incoming space weather. The order, which calls space weather preparedness an “all-of-nation endeavor,” aims to minimize the extent of economic loss and human hardship from space weather, particularly high-impact events which can be caused by solar flares or coronal mass ejections emitted from the Sun.

The White House Office of Science and Technology Policy’s Principal Assistant Director for Environment and Energy Tamara Dickinson announced the finalization of the executive order in a blog post, remarking:

Space weather … can significantly affect critical infrastructure essential to the economy, social well-being, and national security, such as electrical power, water supply, health care, and transportation. … These emissions can interact with Earth, potentially degrading, disrupting, or damaging the technology that forms the Nation’s backbone of critical infrastructure.

Building on these documents, the order directs and clarifies the roles and responsibilities of the White House and eight key departments and agencies in ensuring space weather preparedness. It also establishes an interagency subcommittee under the National Science and Technology Council (NSTC) to coordinate national space weather policy across the federal government, and it highlights the need for the government to work with non-federal partners.

The executive order emphasizes the importance of research on, and the observation, prediction, and modeling of solar activity, and it clarifies each agency’s differentiated roles in these areas. This draws on the first tenet of preparedness in the administration’s space weather policy: “the ability to predict and detect space weather.”

The order charges the Department of Defense with the timely provision of operational space weather observations, analyses, and forecasts, primarily for mission-focused national defense support. To this end, the U.S. Air Force currently operates the Space Weather Operations Center at Offutt Air Force Base in Nebraska, and Joint Space Operations Center at Schriever Air Force Base in Colorado. DOD also operates a network of space-based and ground-based space weather observing platforms, including the Defense Meteorological Satellite Program.

The National Oceanic and Atmospheric Administration is charged with providing forecasts along with watches, warnings, alerts, and real-time space weather monitoring for both public and private sectors. NOAA’s Space Weather Prediction Center, based in Boulder, Colo., is the nation’s official source of space weather alerts and warnings and is where most of this activity is based. In addition, a fleet of satellites that NOAA operates includes the Geostationary Operational Environmental Satellite (GOES) series that, among its other functions, tracks the Sun’s activity and disturbances in the Earth’s magnetic field. NOAA’s Deep Space Climate Observatory (DSCOVR), launched in February 2015, is stationed at the gravitational equilibrium point between the Earth and Sun, where it provides early warning of incoming solar activity.

NASA, the National Science Foundation, and the Interior Department jointly bear national space weather research responsibilities. The Interior Department supports R&D into the Earth’s magnetic field, while NSF is responsible for fundamental research “linked to societal needs for space weather information through investments and partnerships, as appropriate.” NASA shall:

(i) implement and support a national research program to understand the Sun and its interactions with Earth and the solar system to advance space weather modeling and prediction capabilities applicable to space weather forecasting; (ii) develop and operate space-weather-related research missions, instrument capabilities, and models; and (iii) support the transition of space weather models and technology from research to operations and from operations to research.

The NSTC will create a new Space Weather Operations, Research, and Mitigation Subcommittee to oversee and coordinate all of these activities and others related to space weather across the government. The executive order does not explain, however, how the new NSTC subcommittee will relate to the National Space Weather Program, an interagency federal research program established in 1995 that seeks to better predict and provide information about space weather.

In a statement, Sen. Gary Peters (D-MI) thanked the president for acting to help the U.S. prepare for space weather. A bill he has introduced, the “Space Weather Research and Forecasting Act,” would authorize in statute some of the actions that Obama included in the executive order, such as the establishment of the NSTC subcommittee focused on space weather.

The Senate Commerce Committee approved the legislation in a voice vote on April 17, and at a committee recent business meeting Peters urged Congress to take the next step and pass the bill. He hopes the space weather bill might be packaged with the Senate’s larger NASA authorization bill, known as the “NASA Transition Authorization Act.” That bill is a contender for Senate consideration in the November and December lame duck session.