In its research and development planning, the Defense Department is currently following a strategy referred to as the Third Offset, which focuses heavily on technological innovation and implementation. Congress, though, has pushed back on DOD’s Third Offset priorities, allocating higher than requested funding for early-stage research while looking to keep a tighter rein on special innovation initiatives personally backed by Secretary of Defense Ashton Carter.

During this year’s appropriations cycle, the Defense Department has heavily promoted its Third Offset Strategy as a framework for fostering military innovation. First announced in November 2014, the strategy is inspired by Cold War-era initiatives undertaken to prevent the Soviet military from being able to successfully engage the U.S. in conventional warfare. The current objective is to develop new capabilities to respond to the rising ability of nations such as Russia and China to counter advanced U.S. technologies. These new capabilities are likely to include advanced weaponry, but also computationally enabled developments such as autonomous navigation and decentralized force coordination.

Congress has broadly supported the Third Offset concept. However, legislation advanced before the summer recess also exhibited lawmakers’ concerns about the strategy’s overall bearing on the shape of DOD’s Research, Development, Test, and Evaluation (RDT&E) programs.

Today, the Third Offset Strategy is not a document that you can go find in a drawer somewhere in the Pentagon. Instead the term really described the broad nature of capabilities that the Department expects to realize over the coming years by pursuing developments in advanced technologies, by conducting experimentation with prototype systems, to increase emphasis on war gaming, to help us understand new concepts and by emphasizing the need to innovate across the entire DoD enterprise.

DOD has indicated that the Third Offset concept will inform a wide range of activities, including acquisitions and personnel management. However, the focus of the strategy is clearly on RDT&E, and especially on late-stage development and testing. As Welby remarked at the April 12 hearing:

We want to get our [testing] ranges busy again. We want to get new systems out on those ranges. Whether we procure them all or not, we want to learn from those systems and inform what we need in the future.

Accordingly, DOD’s appropriations request—which Secretary of Defense Ashton Carter has called “a major inflection point” for the department—seeks major increases in its big-ticket budgets for advanced component development and prototypes, system development and demonstration, and operational systems development (funded out of the 6.4, 6.5, and 6.7 accounts, respectively).

By comparison, basic research, which might not realize benefits for decades, is not central to the Third Offset Strategy, and DOD has not emphasized it in hearings or its budgetary requests. This situation contrasts with DOD’s active promotion of basic research beginning in 2007. Between fiscal years 2008 and 2014, basic research budgets increased from $1.6 billion to $2.1 billion. Last year, Congress appropriated $2.3 billion to basic research. However, in its own requests last year and this year, DOD has aimed to maintain a basic research funding level of about $2.1 billion.

* All figures are in millions of nominal U.S. dollars and the percentages are calculated based on the unrounded figures. Overseas Contingency Operations spending is excluded.

As part of its Third Offset emphasis on innovation, DOD has also undertaken a series of special initiatives. In early 2015, the department began work on a Long-Range Research and Development Plan to identify projects that could contribute to new military advantages in the 2025–2030 timeframe. A classified report on that effort was completed this year. In April 2015, DOD also announced a new office in Silicon Valley called the Defense Innovation Unit Experimental (DIUx), and a new partnership with In-Q-Tel, a non-profit that invests in technology development for the intelligence community. 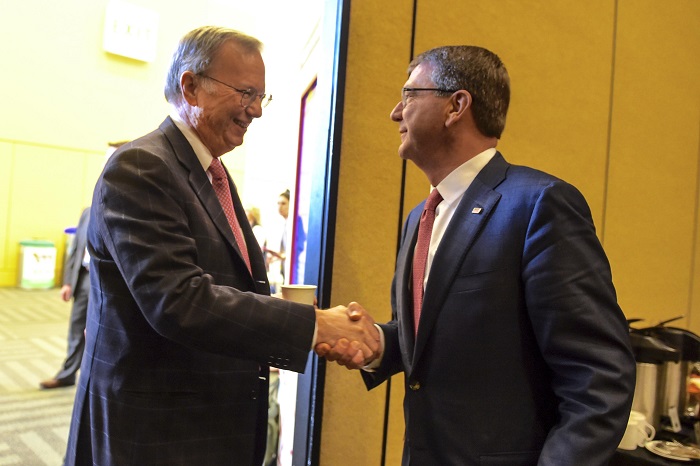 This year, Secretary Carter has taken a personal stake in these initiatives. In February, he began promoting the Pentagon’s swiftly expanding Strategic Capabilities Office (SCO), which develops novel uses for existing and near-term technologies. Established in 2012, the SCO is directed by William Roper, who, like Carter, began his career in fundamental physics research. In March, Carter created a Defense Innovation Advisory Board, chaired by Eric Schmidt, executive chairman of Google parent company Alphabet, Inc. The board will advise on best practices for interacting with innovation-oriented businesses. In May, Carter reorganized DIUx, placing it directly under him in the chain of command, and announced plans to open new branches in other entrepreneurial hubs, beginning with Boston.

Last year, the Senate Armed Services Committee welcomed the announcement of the Third Offset Strategy, and specifically authorized $400 million in unrequested funds to support a Technology Offset Initiative. The amount was reduced to $100 million in the final omnibus spending bill.

This year, the committee became frustrated with DOD’s inability to match the Third Offset concept to funds explicitly dedicated to it. Its May 18 report on the Senate version of the National Defense Authorization Act (NDAA) remarked that the committee viewed DOD use of the $100 million as a “test case to determine the Department’s commitment to and understanding of the technology offset initiative.” The report rebuked the department for spending only $6 million of the funds on what the committee considered to be “true offset technologies.” Committee members were further dismayed by the department’s failure to use any of the funds to advance directed energy weapons, contravening the Senate’s expressed wishes. The committee has discontinued the funding in this year’s authorization.

Meanwhile, the House Armed Services Committee has moved to exercise some control over Carter’s special initiatives. Its report on the House version of the NDAA suggests the SCO may be growing too quickly, and recommends funding $40 million less than the requested $844.9 million. The committee also questions whether DIUx, for which DOD has requested $45 million, can spur commercial technologies that will “provide an enduring warfighting advantage over near-peer adversaries.” It has threatened to withhold some funding for the unit until DOD more fully articulates its vision for its Silicon Valley experiment.