On July 18, the Space Subcommittee of the House Science Committee convened a hearing to discuss the NASA Planetary Science Division’s two scheduled flagship missions, the Mars 2020 Rover and the Europa Clipper. In addition, the subcommittee heard about one of the division’s upcoming Discovery-class missions, Psyche, which will launch in 2022 to explore a metal asteroid located between Mars and Jupiter.

The hearing also provided the committee with the opportunity to probe the persistent question of how NASA manages its mission portfolio. Subcommittee Chair Brian Babin (R-TX) suggested that NASA could find itself overburdened by the Europa lander mission, a third flagship mission championed by House Appropriations Subcommittee Chair John Culberson (R-TX) and supported in recently enacted legislation.

The Space Subcommittee heard updates about two of NASA’s flagship missions, the Mars 2020 Rover (left) and the Europa Clipper (right), and the new Discovery-class mission to explore the asteroid Psyche (middle).

In his opening statement, Subcommittee Ranking Member Ami Bera (D-CA) said that maintaining mission balance is a sound way for NASA “to maximize the scientific return-on-investment for planetary exploration.”

Asked by Bera if focusing on flagship missions would pull resources away from smaller missions, Elkins-Tanton replied that smaller and larger missions complement each other, saying,

The smaller missions form a framework and they set the stage for the kinds of bigger expeditions that we want to do. … Every time we do something in space it surprises us, and so we must try these smaller missions to find out where the biggest surprises are, and then put our money on making the big discoveries.

Green agreed that smaller missions are the “pioneers” at “the heart of the exploration process,” which inform the direction of NASA’s flagship missions.

Elkins-Tanton also testified that, to keep costs down, smaller missions use “trusted, high-heritage components” while flagship missions provide more opportunity for developing new, innovative technologies. She stressed that both are important, saying, “We need our trusted technology today and we need new technology for the future.”

While the decadal survey process plays an important part in determining which missions NASA should prioritize, it is up to Congress to provide budgetary and legislative backing for those priorities. Notably, the House appropriations bill for NASA for fiscal year 2018 would provide $495 million for both an orbiter and lander for the Europa mission, and specifies that the lander should launch by 2024.

Both Babin and Smith expressed their support of the lander concept in their opening statements. However, Babin stressed that the agency must avoid allowing large missions to unbalance its portfolio, saying,

I strongly support NASA and its efforts with the Mars Rover 2020 and Europa Clipper. I also believe there is great value in exploring the possibility of a Europa lander. However, it is critical that as Congress and NASA moves forward, we do our due diligence to assure not only flagship mission success, but also the success of the entire Planetary Science portfolio.

Explaining how mission portfolios are constructed, McKinnon said that the decadal survey produces a prioritized list of potential missions, favoring programs with the most “science return per dollar.” In the latest survey, science programs were judged within three key themes: “building new worlds,” “planetary habitats,” and “workings of solar systems.” Other prioritization criteria used were programmatic balance, technological readiness, and availability of trajectory opportunities.

McKinnon said his committee receives frequent reports on the implementation of the priorities by NASA, and has reported to the National Academies’ Space Studies Board that the Planetary Science Division is in a good state and that its portfolio is in line with the decadal survey priorities.

Babin asked Green what NASA is doing to avoid the risk of cost overruns and schedule delays given that the Planetary Science Division may be pursuing three flagship missions simultaneously if NASA approves the Europa lander to go ahead. Green responded that NASA used to justify pursuing scientific goals via strategic missions “almost at any cost.” He said, though, that more recently the Planetary Science Division “has begun the process, in particular with Mars 2020, to have a cost-constrained environment.” Green and McKinnon observed that NASA had followed the most recent decadal survey recommendations to descope the Mars 2020 and Europa Clipper missions. McKinnon also noted that the Europa Clipper mission to orbit Jupiter and flyby Europa came about as a result of a de-scoping the original mission to orbit both, and that he feels this turned out to be a better mission arrangement.

Rep. Dana Rohrabacher (R-CA) questioned whether the prioritizations set by the decadal survey had been achieved, arguing, “When you have so many projects at one time, it indicates that there hasn’t been a real fighting-it-out of what priorities we need.” Green assured subcommittee members that “the planetary decadal was quite clear that the top things that we should be doing we are doing,” and he stressed that carrying on studies outside the decadal survey’s recommendations are important since “those are indeed laying the groundwork for [NASA’s] future work,” such as potential missions to Neptune and Uranus. 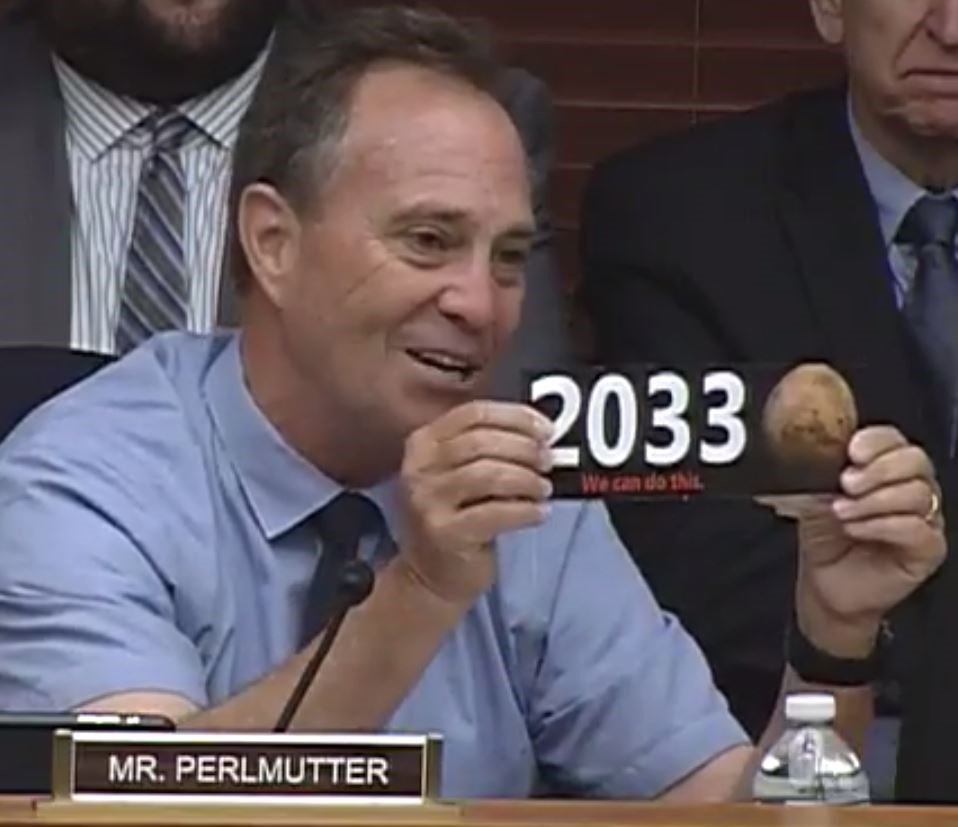 Rep. Ed Perlmutter (D-CO) asked how the Mars Rover 2020 mission will assist in getting humans to Mars by 2033, a target goal directed by Congress in the NASA Transition Authorization Act signed into law earlier this year. Farley replied that the Mars 2020 Rover mission will have multiple instruments that provide data necessary for successful human exploration, including the Mars Oxygen In-Situ Resources Utilization Experiment (MOXIE) demonstration to produce oxygen from the Martian atmosphere, a weather station to characterize environmental and dust conditions, and an observation package to record what happens during entry, descent, and landing. He also said a future mission could bring core samples collected by the rover back to Earth.

Critics have often suggested that the goal of landing humans on Mars in the 2030s is unrealistic under current policies. Recent remarks by William Gerstenmaier, associate administrator for NASA’s Human Exploration and Operations Directorate, give some support to this notion.  At a conference earlier this month, he said “I can't put a date on humans on Mars [because] at the budget levels we described, this roughly 2 percent increase, we don’t have the surface systems available for Mars," citing ongoing challenges in developing systems for entry, descent, and landing.