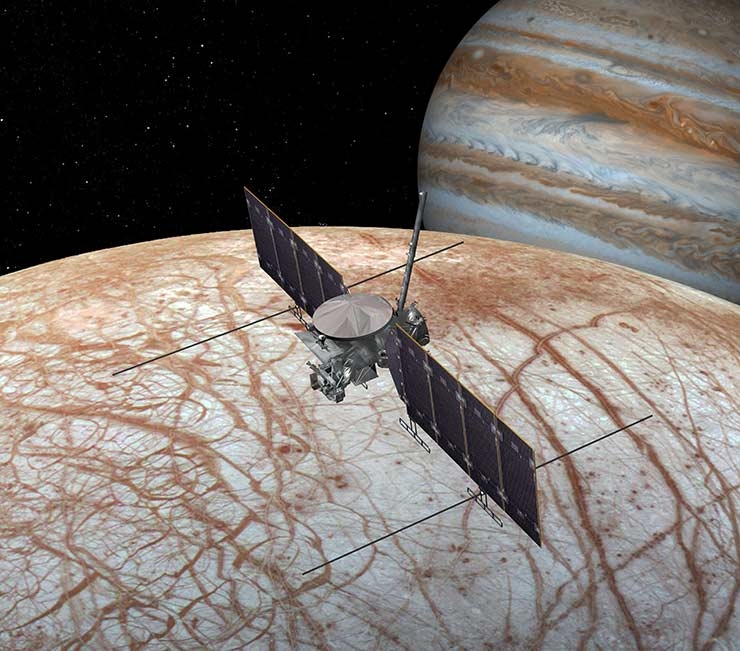 An artist’s conception of NASA’s Europa mission, now officially named Europa Clipper. The mission is one of a number of NASA science missions specifically supported in the “NASA Transition Authorization Act.”

On March 7, the House passed the bipartisan “NASA Transition Authorization Act” on a voice vote. Late last year, Congress nearly passed a very similar bill introduced before the November election to help ensure continuity during the impending changeover in presidential administration. The legislation is motivated in part by memories of the Obama administration’s cancellation of the Constellation rocket program in 2010 and its reorientation of NASA’s human exploration efforts from a near-term moon mission to a Mars mission to occur in the 2030s.

To ensure a smooth passage, negotiators from each congressional chamber finalized the language in this year’s version of the bill prior to its introduction in the Senate in February. The Senate approved the bill by unanimous consent the same day it was introduced, and it now heads to President Trump for his signature.

The bill’s success stems from agreement in both parties that new disruptions in NASA’s policy would be detrimental to the agency’s work and to national interests — an issue recently revisited at a House Science Committee hearing. Nevertheless, there remain simmering disagreements over certain questions that the legislation does not resolve, such as the weight NASA should give to its Earth science activities.

Key elements of current space policy were enshrined in the NASA Authorization Act of 2010, the most recent comprehensive legislative policy guidance for the agency. The new authorization bill affirms congressional support for current goals, and provides updated guidance on a variety of NASA activities and missions, including some of its scientific work.

The main focus of the bill is NASA’s work to revive and extend its human spaceflight program. It endorses the goal of sending astronauts to Mars in the 2030s and the ongoing development of the Space Launch System rocket and the Orion crew vehicle. It also authorizes the extension of International Space Station operations until at least 2024 and support for the development of a commercial capability to transport astronauts to low-Earth orbit.

The bill also affirms congressional support for several major NASA science missions currently in development: the James Webb Space Telescope, the Mars 2020 rover, the Wide-Field Infrared Survey Telescope, and the Europa Clipper, which has just moved into its design phase. In addition, the bill provides backing for astrobiology research, near-Earth objects surveys, and the airborne SOFIA observatory. It calls for new studies of radioisotope power systems and NASA’s “architecture” for robotic Mars exploration, as well as for a strategy for the ongoing search for exoplanets. And, following the recommendation of a recent National Academies study, it places NASA’s senior reviews of science mission extensions on a triennial rather than a biennial schedule.

By and large, the language in this year’s bill is identical to that in last year’s version, the science provisions of which are summarized in additional detail in FYI 2016 #158. Analysis of the changes that were made in this year’s version can be found on pages 12 to 15 of SpacePolicyOnline’s fact sheet for NASA’s fiscal year 2017 budget request.

Members of both parties greeted the bill’s passage, welcoming the stability in mission planning that it will provide for NASA. Sen. Ted Cruz (R-TX), the bill’s primary Senate sponsor, lauded its importance both for NASA and his home state, saying in a statement,

With the passage of this bipartisan legislation, the future of the U.S. space program is now more secure and stable, and we have provided much-needed certainty to the missions of the International Space Station and Johnson Space Center. We are also making a serious commitment to the manned exploration of space, laying the groundwork for the mission to Mars, and enabling commercial space ventures to flourish.

Speaking on the House floor in support of the bill, Science Committee Chairman Lamar Smith (R-TX) drew attention to its addition of a new fundamental objective for NASA, “the search for life’s origin, evolution, distribution, and future in the universe,” and noted the contributions of the Europa mission and the exoplanet strategy to that objective. Smith is a strong supporter of astrobiology research. 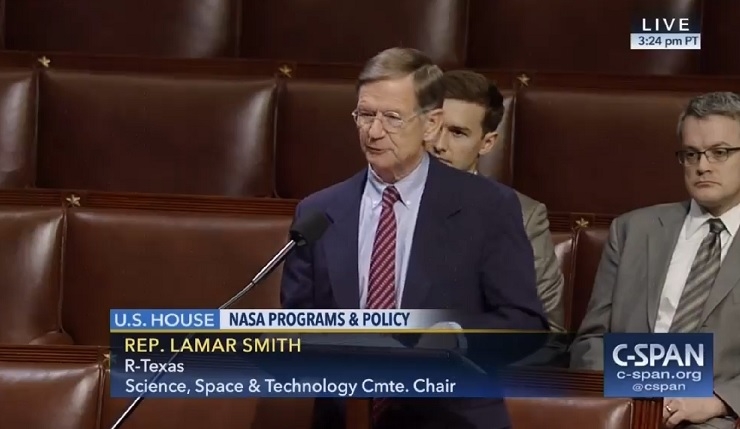 However, partisan tensions over NASA’s scientific work manifested in some lawmakers’ interpretation of certain provisions in the bill. Apparently referencing section 517, a short provision pertaining to NASA’s development of sensors and performance of measurements for other agencies, Smith observed,

Part of achieving success in space exploration is making sure that NASA is not burdened with funding other agency missions. For example, there are 17 agencies with the responsibility for studying climate change, but only one agency, NASA, is responsible for space exploration. This bill directs the NASA administrator to seek reimbursement whenever responsibilities are transferred to NASA from another agency or when NASA funds another agency’s activities.

It is unclear exactly what implications this provision could have for the distribution of responsibilities and transfer of funds among federal research agencies, but the question is certainly a sensitive one. The Science Committee majority has been seeking for some time to “rebalance” NASA’s mission portfolio to emphasize exploration and to deemphasize Earth science. And in November, an adviser to President Trump on space policy sparked widespread concern by suggesting NASA’s Earth science activities be altogether transferred to other agencies. This past week, it emerged that the Trump administration may seek to cut the budget of the National Oceanic and Atmospheric Administration — a leader in the government’s weather, climate, and oceans research effort — by 17 percent, which would impinge on its ability to make any new payments to NASA.

In her own floor speech, the Science Committee’s ranking member, Rep. Eddie Bernice Johnson (D-TX), said she is pleased with the bill, but was disappointed in its lack of clarity concerning NASA’s science portfolio. She remarked,

It is not a perfect bill. It does not directly address all of NASA’s science programs, namely Earth Science and Heliophysics. Those provide the space-based measurements to help scientists understand the Earth’s systems and changing climate, to predict space weather events, which can have a devastating impact on our terrestrial infrastructure.

Johnson said she believes that the “balanced space science portfolio” called for in section 501 of the bill entails maintaining an “adequately funded science program, which includes Astrophysics, Planetary Science, Earth Science, and Heliophysics.” She also said that she was disappointed with its authorization of $5.5 billion for NASA’s Science Mission Directorate in fiscal year 2017, noting it is below the level proposed by the House appropriations subcommittee responsible for NASA. The funding authorization, which pertains only to spending through Sept. 30 this year, does not bind congressional appropriators, who are still working on fiscal year 2017 spending bills.

The Trump administration plans to release its fiscal year 2018 budget proposal on March 16. Speaking at the 2017 Robert H. Goddard Memorial Symposium on March 8, Acting NASA Administrator Robert Lightfoot hinted that NASA will not bear the brunt of anticipated spending cuts, saying, “I think you will see that, at the end of the day, NASA has done okay.” He also said it is “pretty exciting” that NASA is receiving its first new authorization in seven years and welcomed the “constancy of purpose” that the bill provides.