After EPA Administrator Scott Pruitt issued a directive on Oct. 31 restricting recipients of agency grants from simultaneously serving on its advisory committees, some scientific leaders condemned the move, criticizing its rationale and anticipated effects on the advice the agency receives. 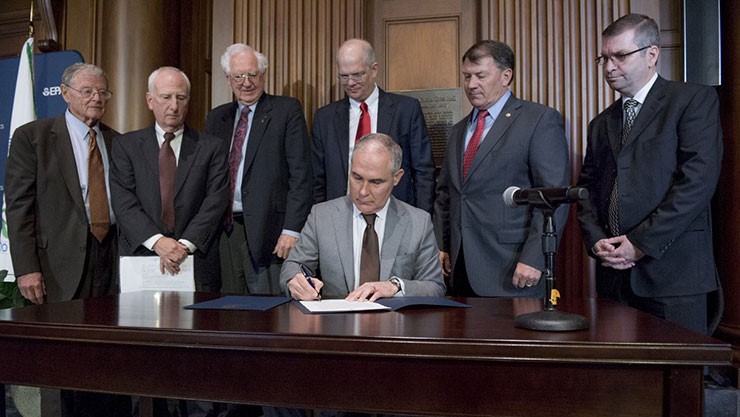 At a press event on Oct. 31, EPA Administrator Scott Pruitt signed a directive prohibiting researchers who receive agency grant funding from serving on any of its advisory panels at the same time. He also announced new chairs for three of the panels: the Science Advisory Board (SAB), which advises the administrator; the Board of Scientific Counselors (BOSC), which advises the EPA Office of Research and Development; and the Clean Air Science Advisory Committee (CASAC), which advises EPA on the technical basis for its air quality standards.

Pruitt framed the shakeup as a means of increasing confidence in the panels’ independence and broadening representation on them. However, his actions have been condemned by scientific organizations, advocacy groups, and congressional Democrats.

Members shall be independent from EPA, which shall include a requirement that no member of an EPA federal advisory committee be currently in receipt of EPA grants, either as principal investigator or co-investigator, or in a position that otherwise would reap substantial direct benefit from an EPA grant. This principle shall not apply to state, tribal or local government agency recipients of EPA grants.

Before signing the directive, Pruitt discussed the role of SAB, BOSC, and CASAC specifically, explaining that the panels provide EPA with “the bedrock of science to ensure that we are making informed [rulemaking] decisions.” He further remarked,

To the American people across the country, we want to ensure that there’s integrity in the process, in that the scientists that are advising us are doing so with not any type of appearance of conflict. And when you receive that much [grant] money — $77 million [in total], just over the last three years — there’s a question that arises about independence.

Beginning in May, EPA began informing members of BOSC whose terms were expiring that, in a break with tradition, their membership would not be automatically renewed, though they were allowed to reapply. On Nov. 3, EPA announced updated membership lists for SAB, CASAC, and BOSC, with a number of the new additions hailing from industry. At the signing event, Pruitt said the directive would apply immediately to all members, old and new, and that any who are currently receiving grant funding would have to choose between the grant or committee service.

Three members of Congress spoke at the signing: Sen. Jim Inhofe (R-OK), Sen. Mike Rounds (R-SD), and Rep. Lamar Smith (R-TX), who chairs the House Science Committee. At the event, Smith remarked, “For eight years, the EPA has had science boards filled with members who have had conflicts of interest.” Referring to his committee’s “EPA Science Advisory Board Reform Act,” he said, “Administrator Pruitt’s actions today enable us to put the principles of this bill into practice. Americans can thank Administrator Pruitt for advancing honest government, sound scientific opinions, and a more responsive EPA.”

As part of his shakeup, Pruitt replaced the SAB, BOSC, and CASAC chairs, who were all academic researchers, with new ones from outside that community.

The new SAB chair, Michael Honeycutt, holds a Ph.D. in toxicology from the University of Louisiana at Monroe, and has worked for the Toxicology Division of the Texas Commission on Environmental Quality since 1996 and has directed it since 2009. In 2014, he was quoted in the commission’s newsletter saying that he enjoys his position there because he does not “have to hype data in hopes of getting a grant or donations to fund my position.” He has often opposed stricter environmental quality standards and criticized the quality of the studies underlying them.

Tony Cox, who will lead CASAC, holds a Ph.D. in risk analysis from MIT, and since 1986 has been president of Cox Associates, a consulting company specializing in analytics and risk assessment. At the signing event, he remarked, “It’s a challenge to make science and scientific advice trustworthy, clear, open, and as valuable as possible at a time when politicization of science and skepticism about the independence and the credibility of scientists concerns so many of us.” He said that CASAC should concentrate on identifying and assessing the results of policy options without advocating or opposing them.

Paul Gilman, who will chair BOSC, holds a Ph.D. in ecology and evolutionary biology. He served as the head of the EPA Office of Research and Development in the George W. Bush administration, and is currently chief sustainability officer for Covanta, a waste storage and energy recovery company.

Pruitt’s directive has drawn widespread criticism that it is a means of compromising the integrity of the panels in order to more easily implement Pruitt’s industry-backed regulatory agenda.

Rush Holt, the CEO of the American Association for the Advancement of Science, released a statement denouncing the directive, saying experts should not be excluded from board membership if they meet existing policies relating to financial conflicts. He wrote, “Science and the use of science in evidence-based policymaking cannot thrive when policymakers use politics as a pretext to attack scientific objectivity.”

Chris McEntee, executive director of the American Geophysical Union, also responded, saying, “AGU takes strong issue with the assertion that the independence, transparency, and objectivity of the scientists who receive federal grants is compromised. … Pruitt’s decision robs the agency — and by extension Americans — of a critically important resource.”

Meanwhile, a group of 10 Senate Democrats led by Sheldon Whitehouse (D-RI) are arranging for the Government Accountability Office to probe the rationale underlying the directive. They observe that GAO previously reviewed EPA’s policies for advisory board membership in 2001 and did not recommend any such sweeping exclusions. They also note a 2004 court decision, Cargill v. United States, that found that grant funding does not constitute a conflict. They also call it a “striking” double standard that Pruitt did not suggest any such remedies for industry-funded scientists’ conflicts.

In addition, Rep. Bill Foster (D-IL), a member of the House Science Committee and former Fermilab physicist, led 60 other Democrats and one Republican in writing to Pruitt, arguing, “Receiving an EPA grant, which is given with no expectation of particular results, does not constitute a conflict of interest — and no such limitation has been proposed on advisory board members who receive industry funding for their work.”

Rep. Eddie Bernice Johnson (D-TX), the ranking member of the Science Committee, along with the ranking members of its subcommittees, also wrote to Pruitt, remarking, “The action appears to be a misguided and potentially unlawful attempt to favor industry and silence, if not remove, qualified scientific experts with no financial stake in EPA actions.”

The entire minority membership of the Science Committee also wrote to Smith on Nov. 7, demanding that Pruitt be called to testify before the committee about several of his actions and policies, including the directive. Smith replied the next day, saying the majority has already been planning to invite Pruitt to discuss “environmental policies, regulations, and sound science,” and that he would keep them up to date on the matter.