The nominees for National Institute of Standards and Technology director and National Oceanic and Atmospheric Administration deputy director received bipartisan praise and encountered no opposition during their Sept. 27 confirmation hearing. The Senate Commerce, Science, and Transportation Committee plans an Oct. 4 vote to advance them to the full Senate for consideration.

On Sept. 27, the Senate Commerce, Science and Transportation Committee held a hearing to consider President Trump’s nominees for four positions, including director of the National Institute of Standards and Technology and deputy administrator of the National Oceanic and Atmospheric Administration. 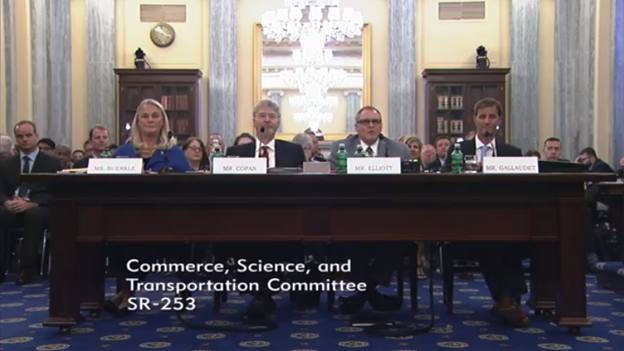 At the outset of the hearing, Committee Chair John Thune (R-SD) said he supports each of the nominees and looks forward to confirming them “as quickly as possible.” The committee has since scheduled an Oct. 4 meeting to vote on the nominations.

Thune said Copan is “exceptionally well qualified” for the role, citing his “broad background in science and technology, a history of working effectively with U.S. federal labs, and significant cross-sector and industry leadership experience.” And after describing Gallaudet’s long and distinguished career in the Navy, Thune remarked, “Clearly the Navy’s loss is NOAA’s gain.”

Ranking Member Bill Nelson (D-FL) used his opening statement to highlight each agency’s role in protecting life and property in the context of the devastation caused by the recent series of hurricanes. He noted NOAA’s role in forecasting hurricanes and studying climate change and NIST’s role in conducting post-hurricane investigations to improve building codes as part of the National Windstorm Impact Reduction Program.

“We need leaders at NOAA who understand the importance of studying climate change, and I hope you, Admiral Gallaudet, will show the same diligence at NOAA in studying and preparing for climate change that you displayed in your role of oceanographer of the Navy,” Nelson said in his written statement. Among his many duties, Gallaudet served as the director of the Navy’s Task Force on Climate Change, authoring the Navy’s 2010 Arctic Roadmap and overseeing development of the Navy’s 2014-2030 Arctic Roadmap.

Addressing Copan, Nelson remarked, “Thank you for bringing the expertise that you have to the job of NIST. It’s a critical federal agency, and it not only contributes to the technology that we have, but it is an essential agency in our national security apparatus.”

As is customary for witnesses that hail from senators’ home states, Sen. Cory Gardner (R-CO) introduced Copan, who currently is president and CEO of the IP Engineering Group Corporation in Colorado. “In light of his experience across a wide range of laboratory and industry research projects and his vision for promoting the great work that NIST undertakes, I believe that Dr. Copan would be an excellent director of the agency,” Gardner said.

Sen. Roger Wicker (R-MS) introduced Gallaudet, who worked at Stennis Space Center in Mississippi during his time as commander of Naval Meteorology and Oceanography Command. Wicker predicted that Gallaudet’s nomination would draw bipartisan support and highlighted Gallaudet’s leadership in employing unmanned systems while in the Navy, saying there is “no doubt Admiral Gallaudet will incorporate this technology at NOAA.”

Copan and Gallaudet detail their priorities

In his opening statement, Copan described his background working at the interface of the public and private sectors as well as his roots as a scientist. He also highlighted his appreciation for NIST’s wide-ranging responsibilities.

Thune asked Copan to describe NIST’s most important recent contributions to enhancing U.S. industrial competitiveness and to explain how he would prioritize the agency’s resources across its research, standards, and services programs. Copan cited NIST’s recent development of the cybersecurity framework as an exemplary contribution. Cybersecurity aside, he identified a number of other areas he expects NIST will focus on in the coming years:

In order to maintain a position of global leadership economically, we look at the future of biological sciences and what’s necessary for biomedical advances to be supported. We also look at the future of spectrum utilization in this nation, and NIST plays a very critical role. Because NIST touches on so many aspects of the U.S. economy, those are certainly amongst the top.

But I would also underscore the role of NIST in supporting advanced manufacturing leadership. Our administration and indeed our nation is looking to strengthen its position globally with respect to manufacturing and job creation here, and NIST has an important role to play there.

I also believe that NIST has a pivotal position for our nation in looking at technology transfer and commercialization from the federal sector into all aspects of our economy, and with my background in both intellectual property and tech transfer, I believe that will be a special focus for NIST to enhance what goes on across the federal sector.

Gallaudet described his top three priorities for NOAA in his opening statement:

Of the many exciting opportunities that face NOAA today, three interest me most.

First, implementing the Weather Research and Forecasting Innovation Act of 2017. This will enable NOAA’s combined atmospheric sensing and modeling capabilities to be the best in the world, and continue to protect lives and property while enhancing the national economy.

Second, advancing fisheries management under the Magnuson-Stevens Act and any potential reauthorization. This, along with supporting the growth of aquaculture in the U.S. will help to eliminate our $13 billion seafood trade deficit.

Thune asked Gallaudet to commit to fully implementing the Weather Research and Forecasting Innovation Act, which Thune played a lead role in developing. “That will be my top priority if confirmed,” Gallaudet replied.

Sen. James Inhofe (R-OK) noted his pride in the work of NOAA’s National Severe Storms Laboratory in Oklahoma and asked Gallaudet how he would ensure that NOAA continues to focus on its severe weather forecasting mission. In response, Gallaudet noted that the Weather Research and Forecasting Innovation Act explicitly calls for improving severe storm warnings and said that he looks forward to implementing the provision.

Sen. Catherine Cortez Masto (D-NV) alluded to recent reports of staffing issues at the National Weather Service and asked Gallaudet to pledge to be transparent with the committee when making workforce decisions.

Copan and Gallaudet were asked few other questions during the hearing, although senators may submit additional questions for the record. Their answers to the committee’s pre-hearing questions are posted here. The documents contain details on each nominee’s background and views on their respective agencies. In an interview with FYI prior to the hearing, Copan offered further details on his initial vision for the agency.