As the National Science Foundation seeks partners capable of operating the Arecibo and Green Bank radio telescopes with significantly reduced funding from NSF, several Appropriations Committee members are pledging to fight to ensure the facilities remain open, a few of whom argue the agency should maintain its current level of support. 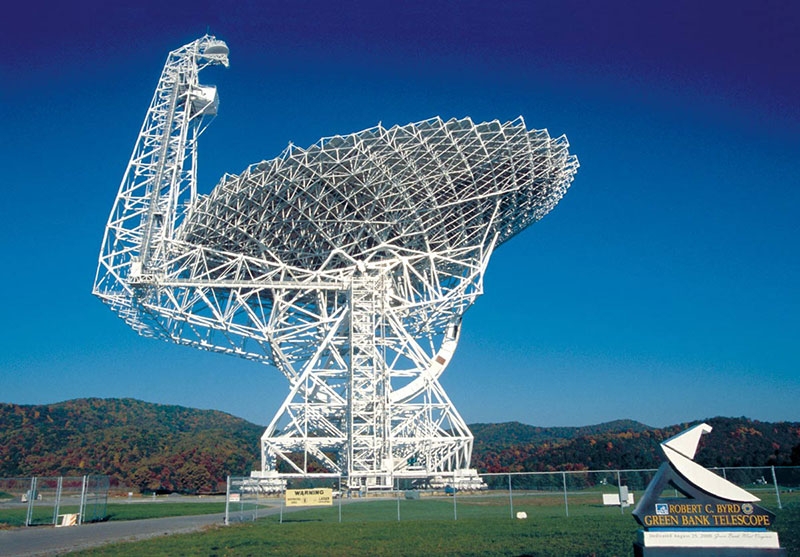 Within the last month, the National Science Foundation has reached key milestones as it moves to divest from the Arecibo Observatory in Puerto Rico and the Green Bank Observatory in West Virginia. Because of constrained budgets, NSF is seeking to ramp down funding for these and other facilities to free up resources for higher priority activities.

In response to NSF’s recent actions, several members of Congress who sit on committees that shape the agency’s budget have said they will fight to ensure Arecibo and Green Bank remain open. NSF is seeking to establish partnerships that permit both to continue operating under significantly reduced funding from NSF. Nevertheless, two appropriators are arguing NSF should maintain its current level of involvement in the facilities.

Arecibo and Green Bank at different stages of divestment process

On Nov. 16, NSF announced that it has formally decided to seek a collaboration with interested parties capable of continuing science-focused operations at Arecibo under substantially reduced funding from the agency. Prior to making the decision, NSF assessed the implications of several potential futures, ranging from continued operations to complete deconstruction of the facility.

NSF is following the same route for Green Bank, although it is not as far along in the process. NSF released its draft environmental impact statement (EIS) for a range of alternatives on Nov. 8 and held a meeting in West Virginia to solicit public feedback on Nov. 30.

Jim Ulvestad, the acting director of NSF’s Mathematical and Physical Sciences Directorate, told FYI that a primary factor influencing the agency's decision for Arecibo is that “one or more viable collaborators” responded to a call for proposals issued in January 2017. The solicitation sought organizations capable of operating the facility as NSF reduces its annual contribution from about $8 million to $2 million over a five-year period. 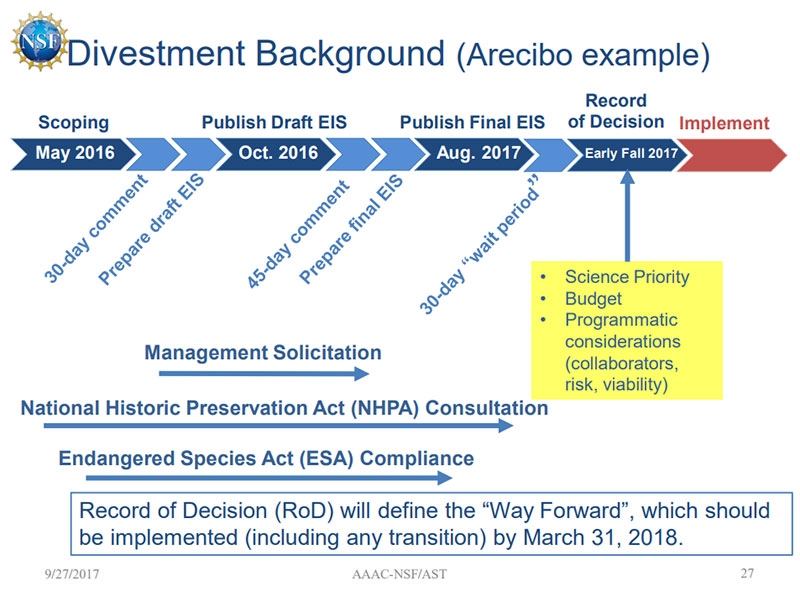 This slide depicting the divestment process for Arecibo is from a presentation delivered at the September 2017 meeting of NSF’s Astronomy and Astrophysics Advisory Committee.

Ulvestad said the response to the solicitation indicates the likelihood is “quite high” that NSF will be able to negotiate a new operating agreement before the current one ends on March 31, 2018. However, he also noted that NSF’s decision to pursue this path is contingent on the agency receiving funds from Congress to repair Arecibo to its state prior to being damaged by Hurricane Maria.

NSF estimates that it will cost $4 million to $8 million to fix the facility. The White House has asked for $7.7 million to repair NSF-owned facilities and equipment damaged by Hurricanes Irma and Maria in its latest disaster recovery funding request submitted to Congress on Nov. 17.

Ulvestad said NSF’s decision to formally pursue partners demonstrates the agency has always been serious about finding a way to keep the facility open:

I’m real enthusiastic about [the process so far] because we’ve had five years of people complaining that all we’re really trying to do is close Arecibo, and that’s never been our intention. … We’ve been trying to find a viable future for both the unique science it does and for the important role that it plays in Puerto Rico, both as a scientific drawing card and as an educational vehicle.

Several members of the House and Senate Commerce, Justice, and Science (CJS) Appropriations Subcommittees, which develop the legislation that funds NSF, have pushed back on the agency’s plans for the facilities. As subcommittee members, they are in a position to shape or halt NSF’s divestment process if they can convince the chairmen to include directives within appropriations legislation.

One such member is Rep. José Serrano (D-NY), the ranking member of the House CJS subcommittee. Serrano, who was born in Puerto Rico and has been an advocate for the territory during his time in Congress, blasted NSF’s decision for Arecibo in a Nov. 16 statement:

This announcement couldn’t come at a worse time for Puerto Rico. It adds insult to the injuries sustained during Hurricane Maria. Scientific research and development are needed now more than ever on the Island to help retain professionals, train students, and motivate investors to look towards Puerto Rico. Reduction in federal support and oversight will likely raise prices and research costs and obstruct scientific advancements at the institution.

The NSF must maintain federal support and ownership of the observatory, and continue leading the breadth of scientific activities that takes place there as a demonstration of the nation’s integral commitment to the Island and to scientific research. As the lead Democrat on the Commerce, Justice, and Science Appropriations Subcommittee and someone who over the years has fought to protect federal funding for the observatory and its activities, I will do everything in my power to prevent this misguided decision from moving forward.

Similarly, Sen. Joe Manchin (D-WV), a member of the Senate CJS subcommittee, sent a letter to NSF on Nov. 13 criticizing the draft EIS for Green Bank and requesting a meeting with NSF Director France Córdova.

“I believe that the Observatory’s contributions to national and international science and the West Virginia commitment to this work justifies the Foundation’s strong, continued full-time support and presence at the Observatory,” wrote Manchin. “Unfortunately, the DEIS does not provide sufficient detail about the business case to demonstrate that [NSF’s preferred] alternative has long-term viability.”

Other appropriators have stopped short of arguing that NSF should maintain its current level of support for Arecibo and Green Bank, although they have made clear they will seek to ensure the facilities remain open.

Sen. Shelley Moore Capito (R-WV), another CJS subcommittee member, issued a statement on Nov. 9 noting that as a member of the panel she has supported “continued operations” of Green Bank.

Likewise, in a Nov. 28 op-ed published in the Charleston Gazette-Mail, Rep. Evan Jenkins (R-WV) noted his history of supporting Green Bank in his role as vice chair of the CJS subcommittee and vowed to “never stop fighting to keep the Green Bank Observatory open and fully operational.” Staffers for Jenkins, Capito, and Manchin all spoke at the Nov. 30 public meeting.

Rep. John Culberson (R-TX), chair of the House CJS subcommittee, has not recently made a statement on Arecibo or Green Bank, although he expressed his support for the facilities at a hearing he convened in June on NSF’s budget request for fiscal year 2018:

We've had previous budgets recommend cutting or reducing [or] even eliminating Arecibo, and we've always stood behind it because it's a national strategic asset. It's a unique radio observatory that has unique capabilities that we simply cannot permit to fall by the wayside. I know you're looking at options about what to do [with Arecibo] in the future. But Arecibo and Green Bank in West Virginia — we strongly support the preservation of those vital facilities, and frankly, the expansion of the great work you're doing in astrophysics.

NSF's decision to divest from several astronomical facilities stems from the 2010 decadal survey for astronomy and astrophysics.

In particular, NSF’s Astronomical Sciences Division reviewed its current facilities portfolio in response to a recommendation from the 2010 survey. The review concluded that NSF should divest from several older facilities in order to free up resources for newer ones deemed more important to meeting the science goals laid out by the decadal survey.

The mid-term assessment of the 2010 decadal urged NSF to proceed with the divestment, although it also warned that “divestment alone will not resolve the budget stresses imposed by rising facilities costs.”

Nevertheless, at least in the near term, the House CJS subcommittee is moving to block NSF from reducing funding for its portfolio of astronomical facilities.

The report accompanying the House CJS appropriations bill for fiscal year 2018, released in July 2017, conveys that the committee “expects NSF to sustain support for the programs and scientific facilities funded by the Astronomical Sciences Division at no less than the fiscal year 2017 levels to maintain full scientific and educational operations.” The report also says that NSF “shall not implement any final divestment of infrastructure tied to the findings of its 2012 Astronomical Sciences Portfolio Review without first reporting such actions to the Committee.”

The report for the Senate CJS bill does not contain this language. Negotiations between the House and Senate will determine whether it is included in their final appropriations agreement.