Earlier this week, President Trump signed into law two bills that leverage existing programs at NASA and NSF to promote the advancement of women in STEM fields. Trump’s remarks at the signing constituted his first extemporaneous comments on science policy. 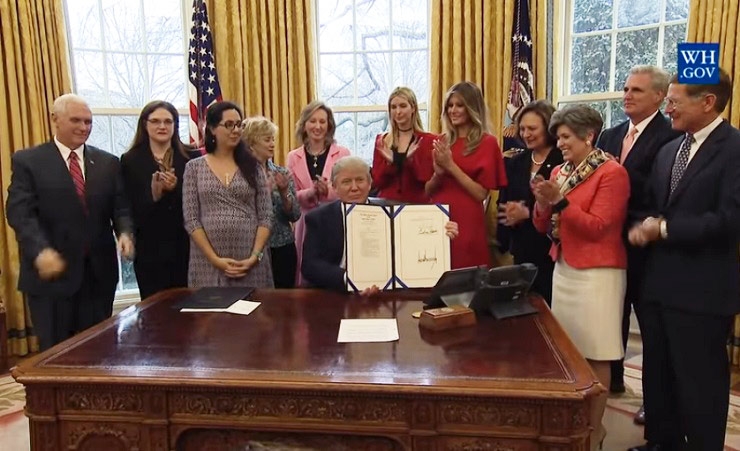 On Feb. 27, at a brief Oval Office press event, President Trump signed into law two bipartisan bills promoting the advancement of women in STEM fields. While the bills are relatively minor in their scope, they represent Trump’s first encounter with science policy legislation.

Rep. Elizabeth Esty (D-CT) had previously introduced one of the two bills, the Promoting Women in Entrepreneurship Act, in 2014, and again in 2016 when it was passed by the House. The legislation adds a new provision to existing law pertaining to the National Science Foundation’s promotion of women in STEM, mandating that the foundation should also “encourage its entrepreneurial programs to recruit and support women to extend their focus beyond the laboratory and into the commercial world.”

Rep. Barbara Comstock (R-VA) first introduced the Inspiring the Next Space Pioneers, Innovators, Researchers, and Explorers (INSPIRE) Women Act last year, when it, too, was passed by the House. The bill directs NASA to “encourage women and girls to study science, technology, engineering, and mathematics, pursue careers in aerospace, and further advance the Nation’s space science and exploration efforts” through support of three existing initiatives: the NASA GIRLS and NASA BOYS mentoring programs; the Aspire to Inspire outreach program; and the Summer Institute in Science, Technology, Engineering, and Research (SISTER) for middle school students. The bill also directs the agency to plan to facilitate and support engagement by women astronauts and STEM professionals with girls studying at the K–12 level.

The bills’ rapid progress this year came as broad, bipartisan support coalesced around them, with Esty’s bill garnering 44 cosponsors and Comstock’s 68 cosponsors. Unlike last year, the bills were also accompanied by companion bills jointly introduced by Sens. Amy Klobuchar (D-MN) and Dean Heller (R-NV). Both chambers advanced the House bills swiftly, with no amendments or opposition.

In a statement, Esty applauded the bills’ enactment, observing,

Americans overwhelmingly agree that we need more middle-class jobs, better support for aspiring small-business owners, and fewer barriers to participation in the 21st-century economy. The passage of our two bipartisan bills is an excellent step forward that will grow our economy and help women from all walks of life break into fields where they have been underrepresented.

Comstock, who attended the bill signing, said in her own statement,

Our next generation of young women will now have greater opportunities to pursue careers in the STEM fields that are central to our 21st century economy. The INSPIRE Women Act is bipartisan legislation that authorizes NASA to encourage young women to study the STEM fields and to pursue careers that will further advance America’s space missions, and the Promoting Women in Entrepreneurship Act also promotes women and jobs in STEM fields.

Discussing the bills before signing them, Trump pointed to statistics indicating that only about 25 percent of women with STEM degrees have jobs in STEM fields. (The figure for men is 40 percent.)  Trump said the situation is “not fair and it’s not even smart for the people that aren’t taking advantage of it. It’s unacceptable that we have so many American women who have these degrees but yet are not being employed in these fields. So I think that’s going to change. That’s going to change very rapidly.”

He explained that the INSPIRE Women Act “ensures that the existing NASA programs recruit women to STEM-related jobs and aerospace careers,” adding, “Great news. Really the way to go. Very heavy into the whole NASA situation. So women will be a big, big part of it.”

Concerning the Promoting Women in Entrepreneurship Act, Trump said it enables NSF “to support women inventors — which there are many — researchers and scientists in bringing their discoveries to the business world, championing science and entrepreneurship, and creating new ways to improve people’s lives. So important.”

Trump also remarked that “protecting” holders of STEM degrees is related to his campaign against job offshoring, which he cited as “a tremendous problem that displaces many of our best American workers and brains — the brain power.”

Concluding his remarks, Trump suggested he would support further legislation promoting women in STEM and in the workforce more broadly, saying,

We need policies that help support women in the workforce, and that's really very much going to be addressed by my administration over the years, and to get more and more of these bills coming out, and address the barriers faced by females and those in STEM fields. We want American women who graduate from college with STEM degrees to be able to get STEM jobs that can support their families and help these American women to live out the American Dream, which they are so qualified to live out.

Trump’s remarks were his first extemporaneous comments on science policy. During the run up to the election last year, Trump’s campaign did answer a series of questions concerning science policy. However, some have taken Trump’s views on climate science and his casual relationship with factual information as an indication that his presidency threatens federally supported science. Reports that his first budget will slash non-defense discretionary spending have raised further concerns that research activities could be subject to steep cuts.

Yet, while Trump has openly vilified certain social institutions, most notably the press, his general outlook on science appears to be favorable.