At a Senate Commerce Committee hearing with four inspector general witnesses, Sen. Bill Nelson (D-FL) underscored their role in protecting whistleblowers and highlighted a bill he introduced to strengthen federal scientific integrity policies. Among the witnesses was the National Science Foundation’s inspector general, who described ongoing efforts to strengthen the foundation’s oversight of large facilities and reduce costs associated with its use of rotating personnel, among other management challenges.

At a Feb. 8 hearing, the Senate Commerce, Science, and Transportation Committee discussed the role of federal inspectors general and their recommendations for improving various programs within the committee’s jurisdiction. Inspector generals from the National Science Foundation and the Departments of Commerce, Homeland Security, and Transportation testified about the top management challenges facing their respective organizations.

Committee Ranking Member Bill Nelson (D-FL) used his opening statement to draw attention to the “Scientific Integrity Act,” a bill he and 26 other Democratic senators introduced the previous day that aims to strengthen and codify scientific integrity policies across the federal government. Linking the legislation to the subject of the hearing, he remarked:

Inspectors general ensure that federal employees are not muzzled by their superiors when they challenge efforts to distort, misrepresent, or suppress scientific research and analysis. Sadly, we are seeing increasing attempts by some special interests to keep agencies from reporting scientific data and studies on critical public health and safety issues – such as climate change and sea level rise. I will not stand for its suppression – and hope none of our IGs will either. 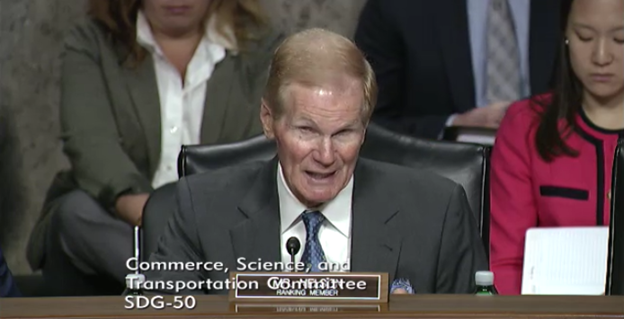 The “Scientific Integrity Act” would require each federal agency that funds or conducts scientific research to develop and implement a scientific integrity policy with the overarching goal of ensuring “the communication and open exchange of data and findings to other agencies, policymakers, and the public of research conducted by a scientists employed or contracted by a Federal agency that funds or conducts scientific research.” It also sets out various requirements that each policy must satisfy, such as allowing for scientists to review documents that cite or claim to represent their work before those materials are published.

More broadly, the bill would provide a stronger statutory underpinning for existing agency scientific integrity policies by expanding a provision of the 2007 America COMPETES Act. The Obama administration’s development of scientific integrity policies was not explicitly mandated by statute, but rather was initiated by a March 2009 presidential memorandum. Links to the policies of 24 federal departments and agencies developed pursuant to this memorandum are available here.

“I believe science should be left to scientists,” Ross wrote in response to a Jan. 19 letter from Nelson. “If confirmed, I intend to see that the Department provides the public with as much factual and accurate data as we have available.”

NSF Inspector General Allison Lerner focused her testimony on four of the seven areas her office identified in its latest report to Congress as posing significant management challenges for the foundation: oversight of large facility cooperative agreements, use of rotating personnel, management of the U.S. Antarctic Program, and improvement of grant administration.

Cooperative agreements are the mechanism NSF uses to partner with non-federal organizations to construct and operate large facilities. The inspector general and Congress have scrutinized NSF’s use of such agreements in recent years, largely due to mismanagement of the National Ecological Observatory Network (NEON) project.

“Our work has demonstrated that the need for strong oversight of large facility cooperative agreements extends over the life-cycle of such awards,” Lerner stressed in her remarks, adding that improving such oversight will require a “continuing commitment to change the culture at NSF.”

Thune also referenced Lerner’s comments on the need for a culture change, asking her to grade NSF’s implementation of large facility management reforms to date. “I think it's early to give them a grade on implementation,” Lerner replied.  “At this point we're happy to see that they've got guidance in place to address many of the issues that we've raised over the years through our recommendations and that the National Academy of Public Administration raised in its report.”

Lerner also highlighted NSF’s extensive use of scientists who are loaned to the foundation from universities and other institutions for up to four years under the Intergovernmental Personnel Act (IPA). Although NSF views the use of such rotating personnel as vital to bringing in new ideas and talent, there is some concern that relying on rotators decreases institutional memory.“Since individuals serve in a temporary capacity there's significant turnover in staff at NSF, especially in executive positions charged with leading the foundation and setting its vision,” she observed.

The IPA program has also attracted scrutiny because many rotators are paid more than equivalent federal employees because their salaries are set by their home institutions and are not subject to federal compensation limits. Lerner noted that NSF paid close to $9 million for 27 executive-level IPA personnel in 2015, with the highest-paid rotator receiving a salary of $440,000.

NSF has been reviewing its use of rotators and announced last fall that it would require their home institutions to pay 10 percent of their academic-year salary and fringe benefits. Previously, NSF requested, but did not require, a 15 percent cost share.